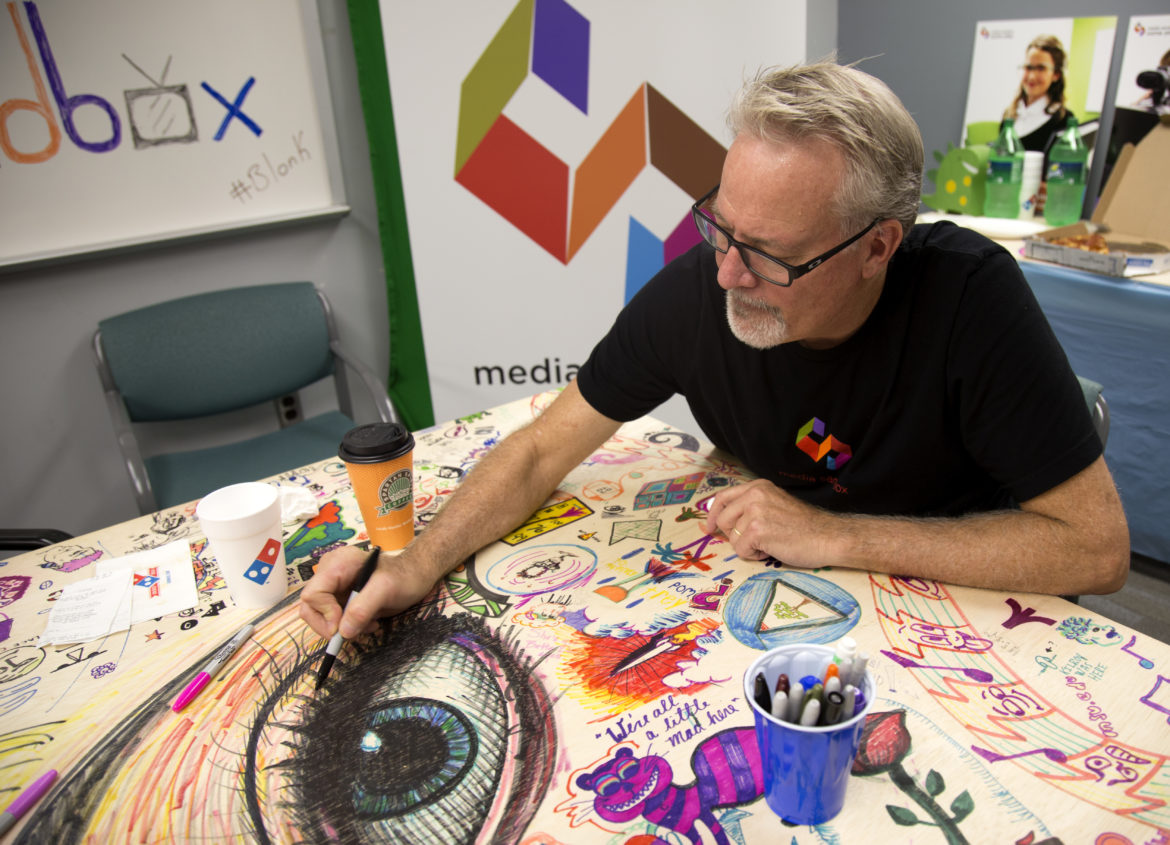 Karl Gude encourages students to let their creativity out on a large table in one of his meeting rooms. Photo by Katie Dudlets.

Karl Gude walks into a lecture hall at Michigan State University on the first day of class. He faces nearly 500 students, some of whom are eager to learn about creative thinking and problem solving, others of which have their headphones in and a screen lighting up their face. Gude already knows how this semester will play out. He’s been teaching the same topic for over ten years.

Standing in front of the class, he asks the students how many of them just want to know how to get a 4.0 in his class. Every single hand shoots up.

“Five-hundred hands,” said Gude, a professor of practice and director of Media Sandbox at Michigan State University. “They want that great grade leaving the university because they think it’ll lead to fame, fortune and pats on the backs from their parents. They want to learn, of course, but there’s a lot of pressure on students to excel, and that’s all translated in numerical data.”

A growing demand for creative education

This emphasis on assignment grades and test scores has stifled creativity in the classroom. According to an international study by Adobe, educators and parents feel the education system itself has become a barrier to creative learning. The study showed reliance on testing, restriction of educators from deviating from curriculum and lack of resources are perceived to be the biggest obstructions to creative teaching.

“My contention is that creativity now is as important in education as literacy, and we should treat it with the same status,” said Sir Ken Robinson, professor emeritus of arts education at the University of Warwick in the U.K., in a TED Talk on the topic.

Higher education students today are facing a difficult reality: The job market is constantly changing due to evolving technology. In a study by Pew Research, expert respondents indicated employers will be putting a higher value on the intangible skills and attributes of potential employees in the next decade.

In this study, respondent Tiffany Shlain wrote, “The skills needed to succeed in today’s world and the future are curiosity, creativity, taking initiative, multidisciplinary thinking and empathy. These skills, interestingly, are the skills specific to human beings that machines and robots cannot do, and you can be taught to strengthen these skills through education.”

These are the exact skills that MSU professors are trying to foster in their own classrooms.

Bringing creativity into the classroom

While Gude is one of the few university professors who actually teaches creativity itself, he said he employs various methods to foster this type of learning in students.

“There are a lot of ways to think about creativity in the classroom,” said Gude. “There are teachers who teach creatively; their classes are interesting and compelling and engaging to students. There are teachers who teach in a way that doesn’t diminish the creative ability of students. They’re nurturing creativity in their students, which is hard in a system like academia, where it’s all about the 4.0 and pleasing the teacher.”

Video News Artist-in-Residence Mike Castellucci is one of the professors at MSU who prioritizes engagement in the classroom. In his Radio and TV News class, each student has a job, as if they are working in a real newsroom. There are producers, directors, teleprompter operators, floor directors and anchors. Everyone’s moving.

“And that’s a lot more creative than just doing a lecture,” Castellucci said.

MSU Digital Media and Film Production Manager Pete Johnston brings out creativity in his students by incorporating challenges into each assignment.

“I structure my Intro to Production class around what I call obstructions,” Johnston said. “I sort of structure the assignments to give them a vague set of criteria to try to play against.”

Some of these obstructions include creating a video with only five shots that are five seconds each, or making a film that can’t be edited after filming. Students have to find innovative ways to get around the challenges, and Johnston finds that they like having to overcome the barriers.

“Every time we watch students’ work, we start out by asking them, ‘What challenges did you face? What roadblocks came up with this obstruction? How did you deal with that? What was your method? Your process?’” said Johnston. “The more that you’re able to receive a challenge, go through working through it and then reflect on what you did, that sort of iterative process is, for me, the best way to approach creativity.”

One of the roadblocks to teaching creativity in the modern classroom is students are often afraid of failure and unfortunately, creating a space for exploration and the possibility of failure without consequence isn’t exactly common practice in most schools.

“What we do know is, if you’re not prepared to be wrong, you’ll never come up with anything original,” said Robinson. “And by the time they get to be adults, most kids have lost that capacity. They have become frightened of being wrong. We run our companies like this. We stigmatize mistakes. And we’re now running national education systems where mistakes are the worst thing you can make and the result is that we are educating people out of their creative capacities.”

Johnston has found establishing a judgment-free environment is one of the most successful ways to get students to be more open to sharing their creativity.

“Create a space for exploration and a safe place where we can watch things, and we can critique constructively, and we can let them feel like they can experiment and they don’t have to always create something perfect,” said Johnston. “I think that’s the easiest way to get students thinking creatively.”

Connecting with your inner child

It’s often been said children are naturally more creative than adults. Their lack of inhibition allows them to be open-minded and free to explore themselves and the world around them.

Brad Willcuts, a musical theater and choreography assistant professor, believes thinking like a child is the only way to be creative. One has to accept they’re not an expert and take on the mindset of a continuous learner.

“I think the perfect combination is when you can combine a willingness to be creative with an adult brain,” Willcuts said. “A kid’s brain, for better or worse, is out there and really letting loose. But if you can foster that in a jaded adult, then you’re onto something.”

Children typically act on impulse. They’re testing the boundaries to see how far they can push them. This is exactly what Willcuts tries to champion in his musical theater classes.

“Improvisation is a wonderful tool to teach people, especially actors, to trust their instincts and be spontaneous,” said Willcuts. “I think spontaneity is a key to creativity because it stops you from adjudicating yourself.”

Extending to Other Disciplines

According to a Pew Research study, more Americans tend to support education that emphasizes creative and independent thinking over the prioritization of basic academic skills. However, while art and science are often deemed to be opposite, many professors feel the capabilities and attributes that come along with creative thinking can aid students in other aspects of their collegiate career.

“I think a basic understanding of improvisation, performance and creativity would be really beneficial for a lot of students,” said Willcuts. “I see it proven to me pretty much every semester – the varying degrees of majors that actually pursue the arts on a minor scale in the classroom.”

Take his student Ellie Weise for example, who’s earning her bachelor’s in genetics and who also happens to have a minor in musical theater.

“I would honestly say that I don’t think that genetics is any less creative than my arts classes,” said Weise. “You have to be like, okay, this experiment said this, and now we’re going to follow this path. But that path is really driven by creativity and the limit to where science goes is up to your imagination. I feel like the foundation is the same, but the way you build the house is really different.”

However, this extension into other disciplines doesn’t simply have to relate to one individual. Take Media Sandbox in the College of Communication Arts and Sciences for example. It’s a creative community and media curriculum focused on bringing together students with various creative skills to solve complex problems. In much the same way, Robinson likes to think of intelligence and creativity as dynamic and wonderfully interactive.

“The brain isn’t divided into compartments,” said Robinson. “In fact, creativity, which I define as the process of having original ideas that have value, more often than not comes about through the interaction of different disciplinary ways of seeing things.”

As head of the science outreach program on campus, Weise works alongside Patrick Morgan, the department of Physics and Astronomy’s outreach coordinator to get students in K12 excited about STEM at an early age. But it’s hard to capture and maintain the attention of fourth graders when the topic is a complicated math or science concept. Morgan attributes his ability to do so to his own creative background.

“I have always been passionate about the sciences, and with a theater minor, I can better show that passion I feel and give it to an audience,” said Morgan.

Through the program, Morgan has employed handfuls of college students to assist in presentations and demonstrations to a K12 demographic. Their creativity and dedication to student understanding inspires him.

“I have seen student presenters catch the attention of entire school assemblies using just marshmallows and a vacuum, or just a spinning wheel and a chair,” said Morgan. “They didn’t need to make a fire or an explosion, or any sort of loud noise. They just had passion and were able to use it creatively to amaze their audience.”

At the university level, a professor’s role is to help students develop the skills they need to succeed in the job industry post-graduation. As technology increasingly becomes more advanced, and the world’s problems get progressively more complicated, creative and innovative problem solvers are what employers are looking for.

As Gude tries to prepare 500 students for life beyond the university, some will surpass expectation while others will fall prey to mediocrity.

“The ones that need it the most just blow off assignments and turn in predictable, unamazing ideas,” Gude said. “It’s pretty frustrating. But if I reach 20 percent of those students, and they go out into the world thinking that there’s actually something to this creativity stuff, that they have potential, then I feel like I’ve succeeded.”

Katie Dudlets is a dual major in journalism and professional writing. In addition to the Spartan Newsroom, her digital and editorial work can be found in The Offbeat, Fourth Genre and on ComArtSci's website.