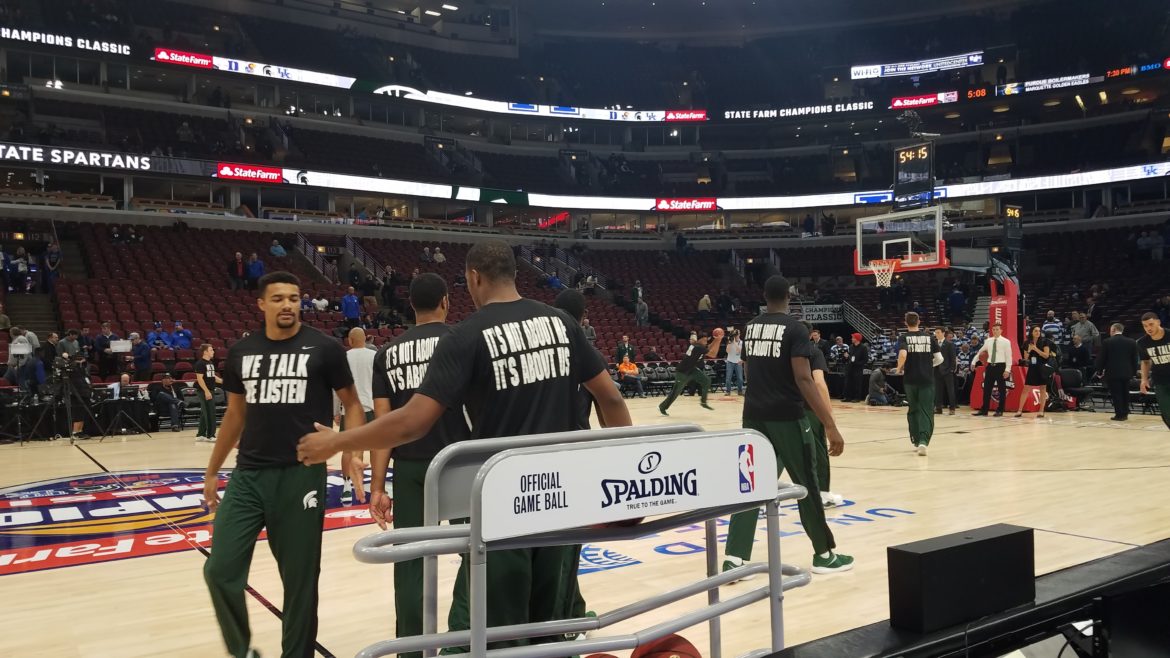 “There are problems in society,” Izzo said. “The issues involving race equality (are) important to me for a lot of reasons: One, my own household. Two, my own team here.”

That statement came two months after the violent protests in Charlottesville, Virginia, and with growing racial tensions across the country.

At the time, the members of Izzo’s team did not know what they were going to do.

“I can promise you one thing,” Izzo said. “If our team does anything, ever, it’s going to be our team. It’s going to be all of us — our coaches, our managers.

“It’s going to be everybody, because that’s what teams do.”

A month later, Izzo and his top 25-ranked team had a plan.

The bold print is found on the front of the team’s warm-up t-shirts.

The first phrase was created by the team after sitting through meetings, over the course of a month, to discuss social issues and how each member felt the team could add something positive to the debate.

“We listen to what everybody else has to say,” MSU sophomore forward Miles Bridges said.

Bridges was also the source for the quote on the back of the shirt.

“It’s not about me, it’s about us,” came from Bridges’ announcement that he would return to Michigan State for his sophomore year instead of entering the NBA draft.

Those words have been the building blocks for the 2017 Spartan team.

“We want to change the world with this team,” sixth-year forward Ben Carter said.

Echoed by his teammates, Carter’s statement is a resemblance of team’s will and want to be more than “the No. 2 team in the country.”

While the Spartans do have national championship hopes, everything they have done off the court is something they are equally as proud of and has ultimately brought them even closer together.

“One of the things I love about sports, it’s a true brotherhood,” Izzo said. “I mean, you think about it … we got guys from Flint and Okemos, Alabama and Ohio. We have guys from Dallas and Detroit, from the Bahamas and Grand Rapids.”

“You become closer to each other by talking and listening to each other,” MSU senior guard and team captain Lourawls Nairn Jr. said. “That’s what makes it so special.”

While the T-shirts have already started a conversation in East Lansing, the team still wants to continue the movement.

“We’re not done yet,” Izzo said. “ We still have some more things planned.”