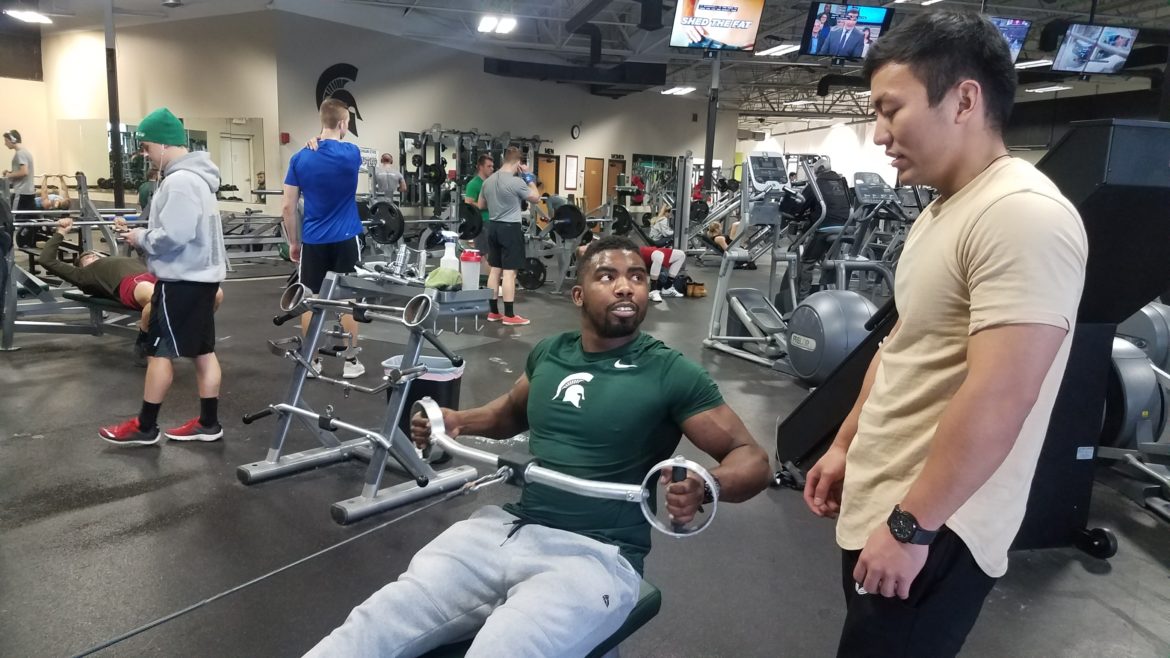 Part of Phil Williams' job as a personal trainer at Powerhouse Gym is to teach clients like Han (right) to right technique to achieve the results they want.

Traditional media forms such as TV, magazines and advertising have a long history of influence on Americans’ perception of the perfect physique.

But with society’s shifts toward a culture saturated by social media, visual platforms like Facebook Instagram and Snapchat are bringing new attention to issues surrounding body image. Women aren’t the only ones feeling pressured to have the perfect figure anymore, either.

“Now more than ever, men are pressured to be the ideal man and body image is obviously attached to it,” said Abe Oloko, a bodybuilder and avid Instagram user who has competed in the National Physique Committee’s men’s physique category since 2015.

“Back in the day, it really didn’t matter,” Oloko said. “A man was looked at for what he could do and provide as a man, but now it’s more about what you look like.” 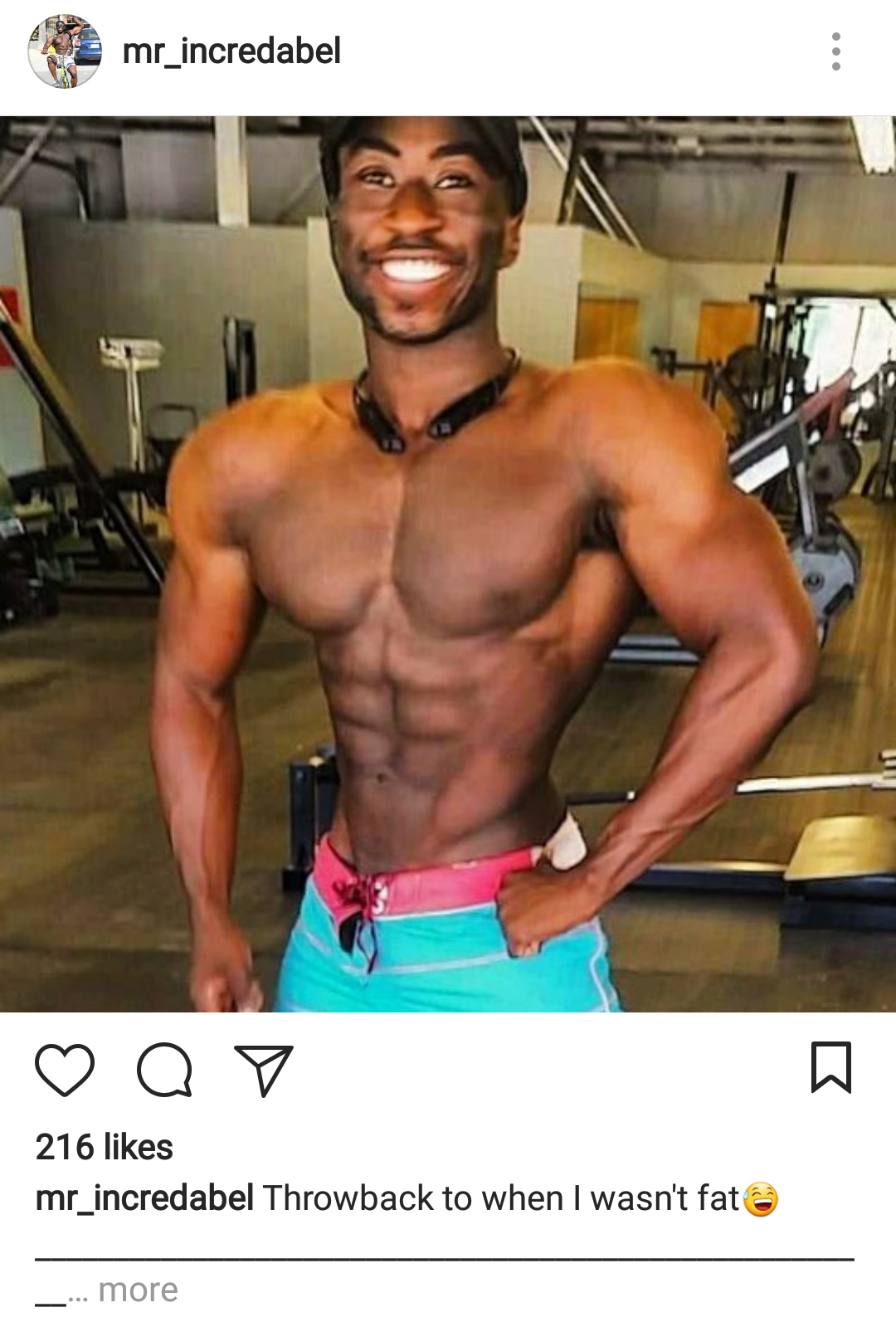 "Throwback to when I wasn't fat" - mr_incredabel 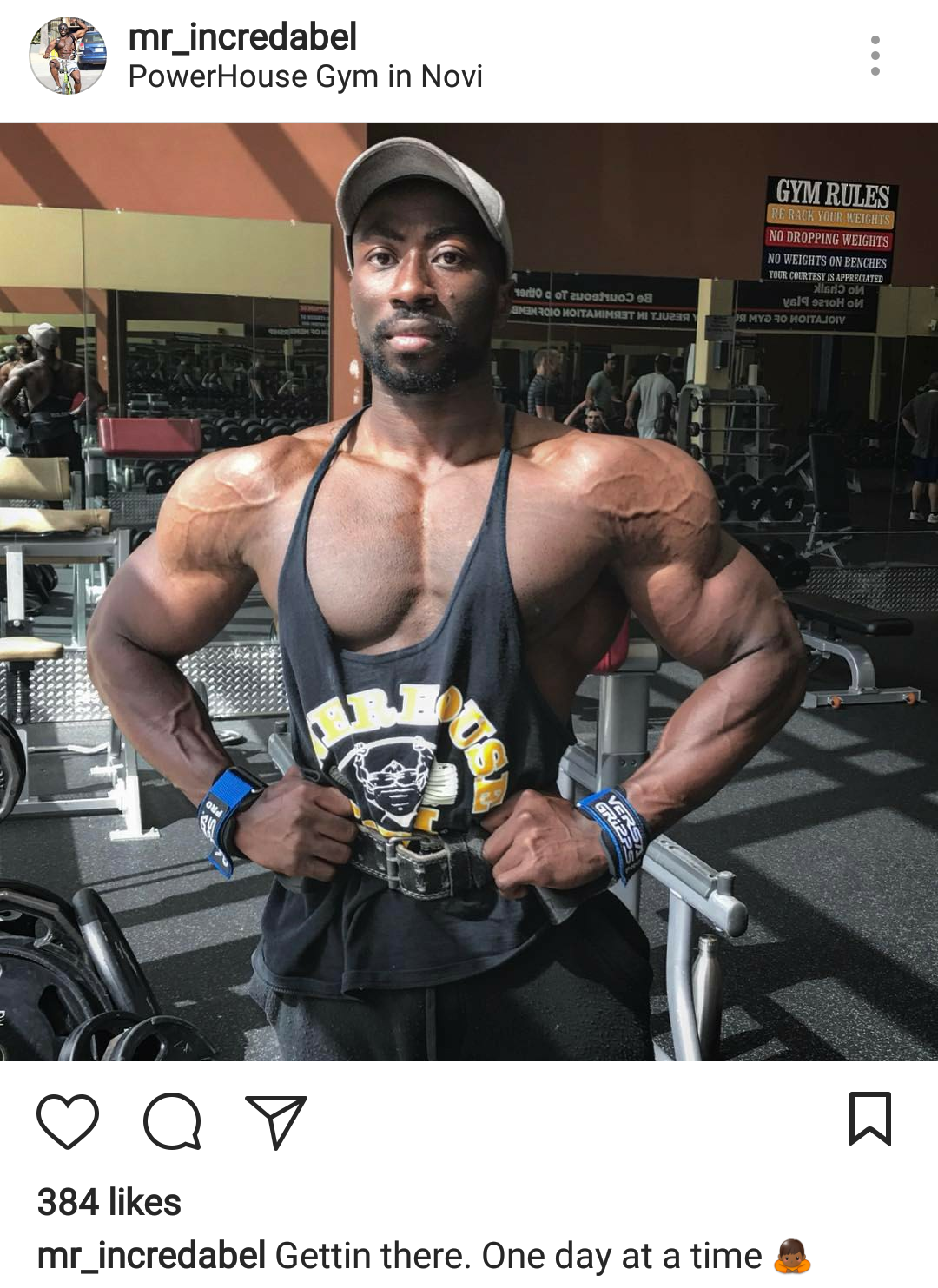 "Gettin there. One day at a time" - mr_incredabel 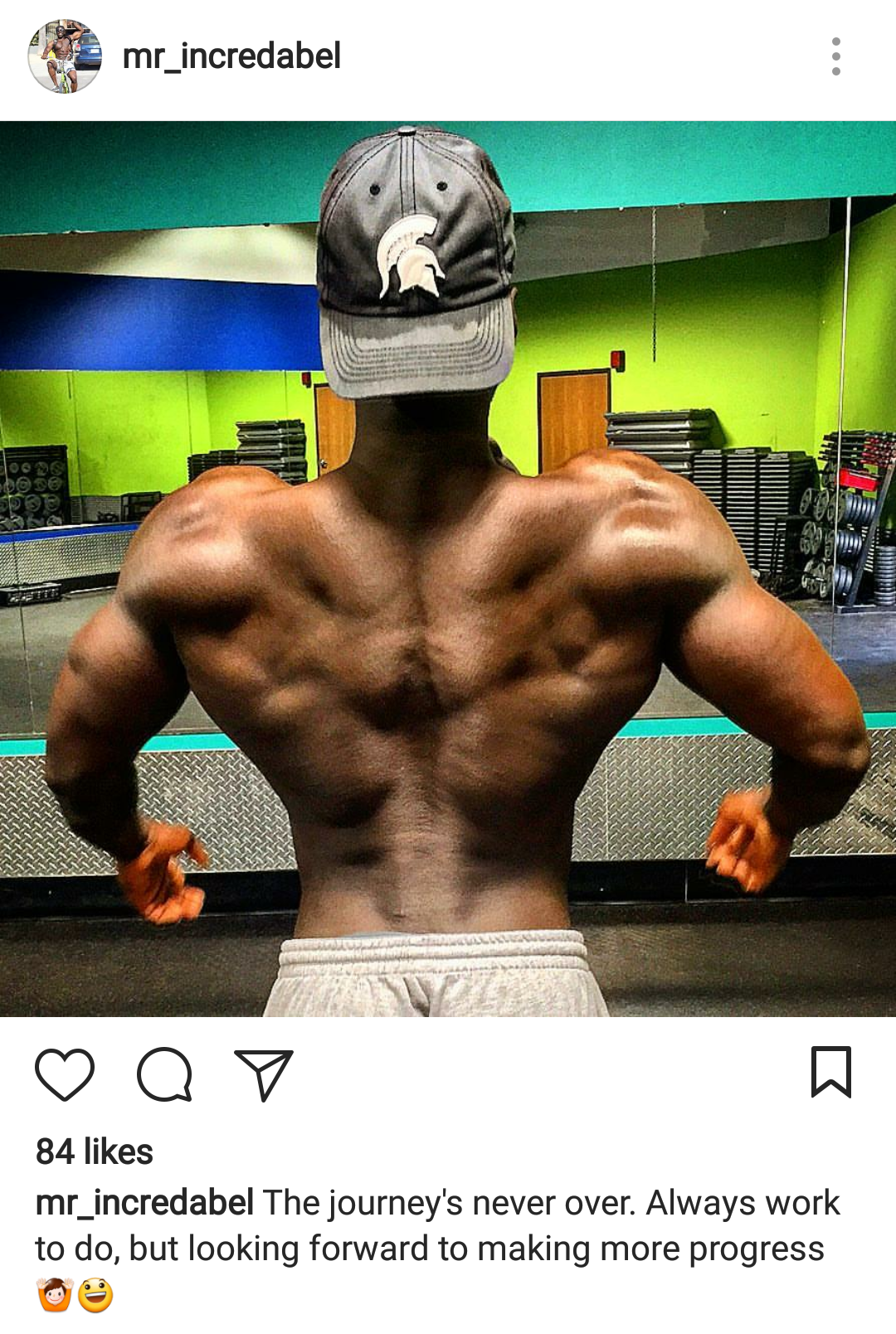 "The journey's never over. Always work to do, but looking forward to making more progress" - mr_incredabel 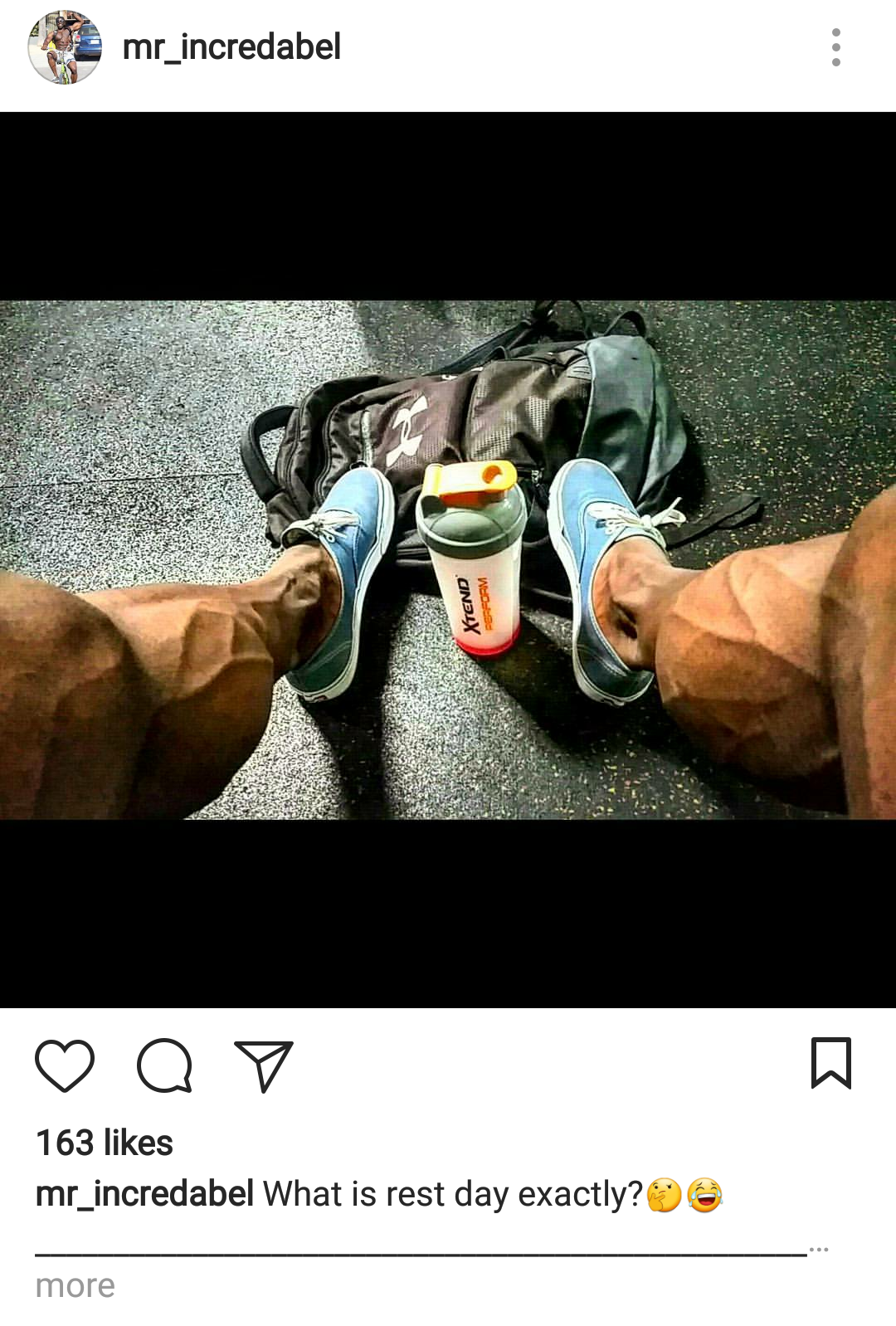 "What is rest day exactly?" - mr_incredabel 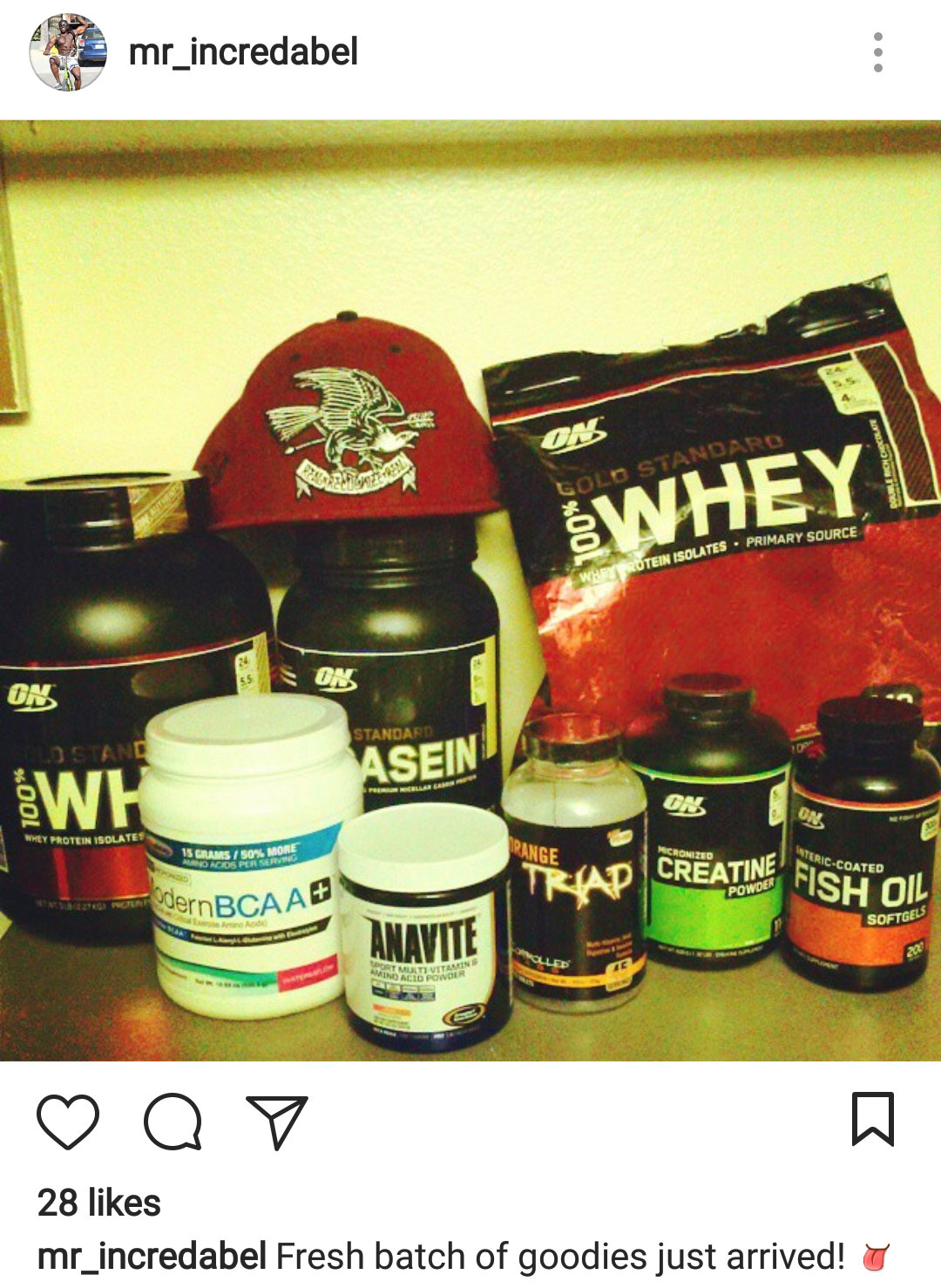 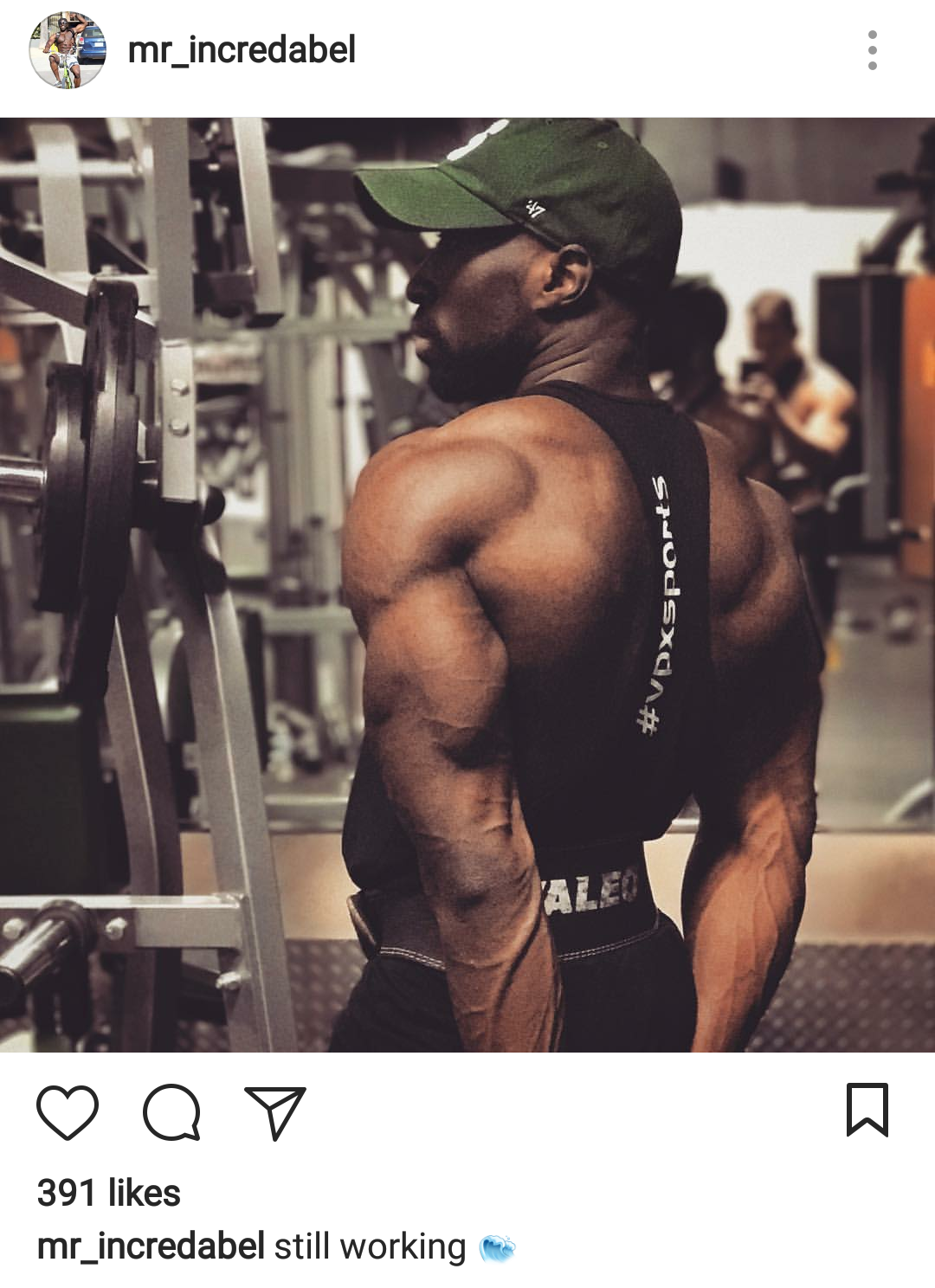 Oloko wasn’t always a bodybuilder, nor was he as physically fit as he is now. Both, he said, came about because of influences from the media and his friends. When he started working out during his freshman year at Michigan State University, he said he felt inadequate when he saw bigger, stronger men in magazines and on social media.

At the beginning, he went to the gym every day hoping to continually get bigger.

“It can make some guys never satisfied, and I’ll be honest when I started out I was like that as well,” he said. “You see these guys online and you think, ‘Wow, these guys look great,’ so you do whatever you can with the hours you have to emulate their workouts.

“But at the end of the day, sometimes you never truly feel like you’re at the level you want to be.”

Even after two years of visible progress, when it came time for Oloko to take the next step and start competing in bodybuilding competitions, he still questioned whether he was fit enough.

“I always looked at other bodybuilders and was like, ‘I don’t look like that.’ It was such a far-fetched idea in my mind. I didn’t think I could reach it,” Oloko said.

Phil Williams, a personal trainer at Powerhouse Gym, has witnessed those issues with his clients. When he asks a new male client what they’re hoping to gain from personal training, Williams said he usually gets a picture of some guy on social media.

“Every time. It never stops,” Williams said. “They always pull out their phone.” Phil Williams (right) holds Han’s (left) back during training to indicate which muscles Han should feel being worked.

The sometimes filtered and altered images of social media can have a dramatic impact on physical and mental well-being of many men and, more severely, adolescent boys.

“People don’t realize that’s not what Instagram models actually look like,” Williams said. “But people have such high standards for themselves to look just like a still photo of someone.”

Men often don’t recognize the majority of images they’re being influenced by are heavily curated to look that way. Images are shot at specific angles or with special lighting to highlight shadows and muscle tone, and subjects are usually wearing tight clothing to create the perception that they’re bigger than they actually are, Williams said.

“It’s misrepresenting how people actually are and how fitness should be perceived,” he said.

Even worse, these images can affect men’s self-esteem if they consistently don’t feel like they’re living up to the social norms set by social media, said Julia Tarsa, a Lansing area counselor who specializes in men’s issues.

Depending on the severity of a person’s fixation on their body image, social media’s influence can sometimes lead people to become anabolic, anorexic or deal with body dysmorphia.

A study published in Psychology of Men & Masculinity found that men who viewed images of other physically fit men tended to perceive themselves as less attractive, in worse shape, and weaker than the men who viewed neutral images of men.

“These findings substantiate current knowledge in the field regarding the negative effects of ideal physical images on men’s body image, and it seems plausible (based on these findings and other research) that changes in body esteem and the internalization of media portrayals could contribute to problematic dieting, exercise, and steroid use in men,” wrote the authors of the study.

Tarsa, Williams and Oloko all agree that positives can come from increased awareness about the influence social media has had on male body image.

Williams said he’s seen the number of people working out regularly at his gym surge since weightlifting became social, and Oloko thinks the escalated perception of the ideal men’s physique is positive because it’s inspiring men to take steps to better themselves in all aspects of their health.

“It’s kind of a double-edged sword, but I think it’s for the better than for the worse,” Oloko said.

Professional writer, journalist, and graphic designer pursuing a career in the entertainment magazine industry. I'm a creative mind and a music geek. Firm believer that an article a day will keep the ignorance away. MSU Spartan--Go Green!