Someone who escapes human trafficking does not find that their struggle is over once they are out. It is difficult to return to a normal life. Efforts are underway in mid-Michigan to increase awareness, housing and resources for those who have been trafficked.

Cassandra Kotlarczyk, manager of emergency and pre-hospital services at Memorial Healthcare in Owosso said more help is on the way. As of January 2018, everyone licensed or registered through the Michigan Department of Licensing and Regulatory Affairs has to have a human trafficking education credit for their license renewal. That includes healthcare, education, social care workers and others.

In January 2017, Michigan made it mandatory for licensed counselors to have at least eight hours of human trafficking education. Michigan was one of the first states to require this of all people in healthcare affiliated fields.

Providing help to survivors of trafficking

There are many ways Michigan is making it easier for trafficking victims to seek help. There are a variety of phone applications available to report and become more knowledgeable about human trafficking available in the app store for free.

“We provide them with education, referrals for housing, food assistance, basic needs such as clothing, shampoo, conditioner, toothbrushes. Whatever else they can think of, we’ll try to find it,” Molnar said.

The SafeCenter also provides counseling. Each session is an hour, with a 90-minute intake, and sessions should be complete after about four months.

Lauren Whaley, SafeCenter counselor, said many clients she’s seen have had extensive trauma and it usually takes a long time to recover.

“We offer free counseling, and mental health is not cheap, so it’s really awesome that we can offer that to them and not have to work through Medicaid or insurance,” Whaley said.

The SafeCenter has an emergency facility that can house 15 adults and six children.

According to the TIP (Trafficking in Persons, U.S. Secretary of State) Report of 2017, the most critical need for human trafficking survivors in the United States is housing.

“I can’t speak at a national level, but I can definitely say that in our community the talk of human trafficking has increased significantly in the last year,” said Molnar.

What is human trafficking?

Men, women and children around the world fall prey to human trafficking each year. It is a worldwide issue that includes both labor and sex trafficking.

Jane White, director of the Michigan Human Trafficking Task Force, said sex trafficking is a series of manipulations that form a relationship for sexual exploitation. For labor exploitation, it is the promise of more money for a job.

“Human trafficking is not an instance. It is a way of life,” said White. “It is taken by somebody looking at vulnerabilities in someone’s background.”

White said anyone could be vulnerable to human trafficking, however, certain things make people more vulnerable.

Poverty, rejection, addiction and alcoholism in the family can make people more susceptible to being trafficked.

For example, a young woman who feels isolated from her family and community is more vulnerable to manipulation.

Predators seek out victims with these types of backgrounds. They might then present themselves to these girls and women as a “boyfriend figure.”

Victims may be made to feel that they are special or, in labor exploitation, how much better off they would be working for them. Often in labor trafficking, the job seems like a legitimate way to a better life. However, that is usually not the case.

Dr. LaClaire Bouknight, founder of the International Dreamcenter of Lansing, said trafficking is a worldwide problem as prevalent as drugs and guns.

“You can sell one rock of cocaine just one time, but you can sell a person two or three times in an hour,” Bouknight said.

People often misinterpret the definition of human trafficking. For many, the first thing that comes to mind when thinking about human trafficking is someone getting kidnapped. In reality, most perpetrators are someone the victims know.

“A lot of people think human trafficking is in other countries. Most of the humans being sex trafficked (in the United States) are citizens and legal residents of this country,” Bouknight said. “One thing we are doing is getting the community aware.”

The internet and social media, platforms for trafficking

Bouknight said the internet and social media are used to trick people into being trafficked because they never know who they are talking to.

“Younger people feel so safe on the internet and putting things out, but you can be trafficked without even leaving your house,” Bouknight said.

Although mass media can inform the public, the portrayals of human trafficking often spread misconceptions.

“I was inspired to create ‘Break the Chain’ when I started seeing more and more articles within newspapers relating to human trafficking cases within Michigan,” Swanson said. “After speaking with Jane White, I realized an accurate representation of human trafficking within the United States was heavily needed.”

The film tells a story about two survivors of human trafficking through interviews with researchers, senators, non-profit organizations and others.

Mason said, “Most people don’t realize human trafficking is so ubiquitously ingrained in our culture and most cultures. Finding ways to exploit other humans happens anywhere and everywhere, in every industry.”

Map of resources in the fight against human trafficking. 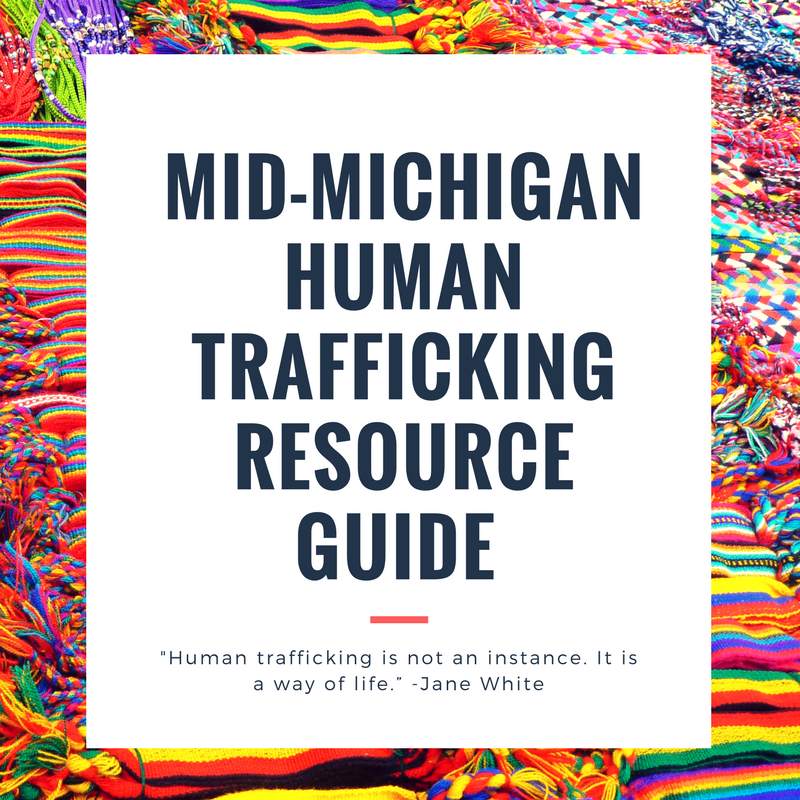 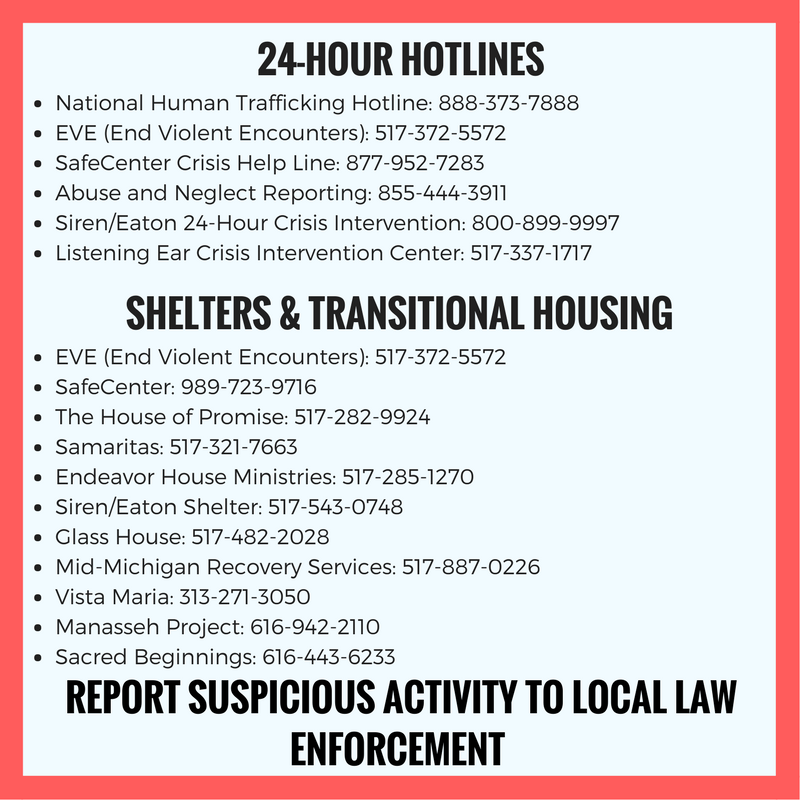 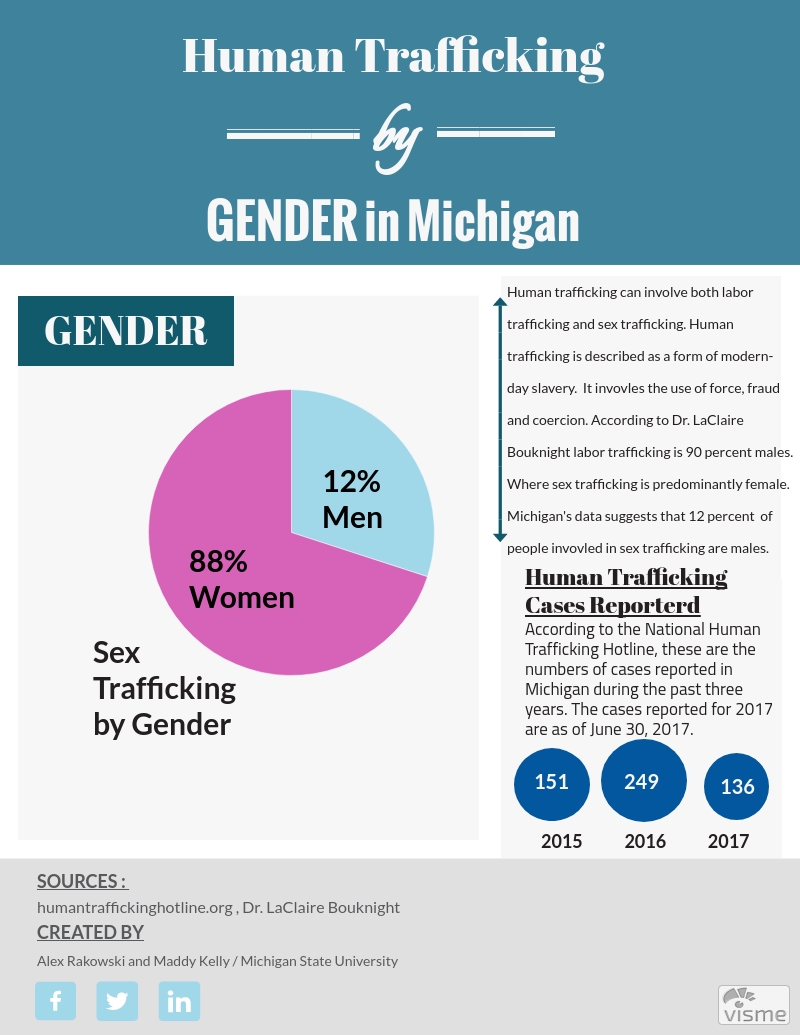 Numbers show how many people in Michigan have been effected by their gender in Michigan. 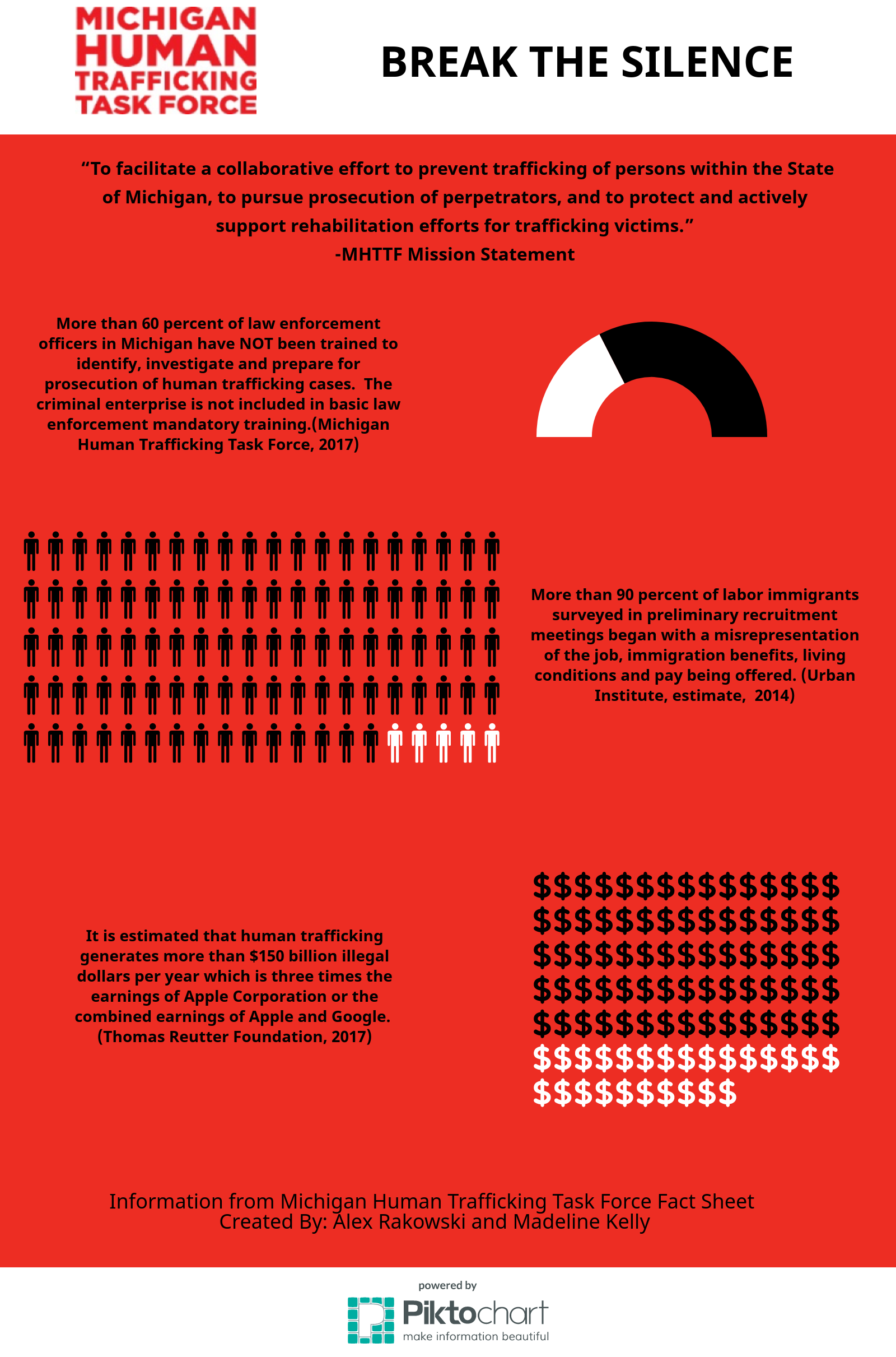