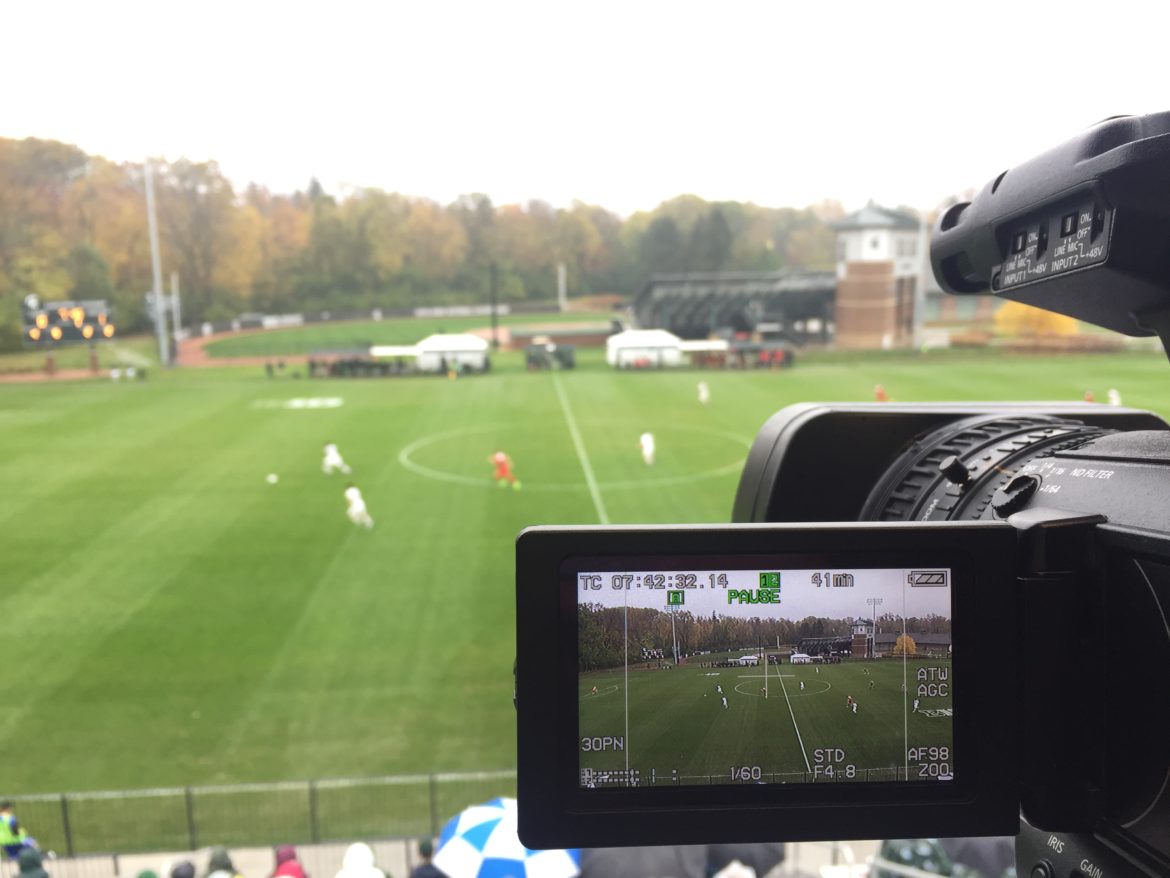 The view from the press box at Michigan State University's DeMartin Soccer Stadium during a match. Few women are play-by-play announcers of any sport.

While the number of women in sports media is slowing growing, play-by-play announcer remains largely a job held by men.

“Sports are male-dominated,” said Alexis Downie, a journalism junior at Michigan State University and vice president of the campus chapter of the Association for Women in Sports Media. “Women just have a hard time being taken seriously and being able to break into the industry because people just have the stereotype in their mind that females just don’t know what they are talking about when that comes to sports.

“It’s kind of a joke to them. So we have to put in two times as much effort to what we do to be taken seriously.”

“The key is having women call sports — all sports.”

But even in women’s sports on the collegiate level — including volleyball, soccer, basketball and softball — male broadcasters outnumber women. Getting more women into those positions would help create a larger pool of female candidates for more high-profile play-by-play jobs.

“Because there is plenty of women sports being televised by Big Ten Network, ESPN and you name it,” Dickerson said. “Even in those sports, from what I see, is still mostly men play-by-play, women color.”

More women also are serving as sideline reporters in recent years, but Dickerson said it’s important for young women to know they can do other jobs in sports broadcasting.

“If you’re a young woman and you’re interested in sports broadcast,” Dickerson said. “Keep your mind open that maybe play-by-play is what you’re really good at, because I hear from a lot of women who want to be a sideline reporter. Don’t limit yourself to that. Be a good play-by-play person.” The Michigan State University women’s volleyball team plays in Jenison Field House. Even in women’s sports, many broadcasting positions are held by men.

“I think gender inequality is evolving,” Carter said. “There was a time when women were not permitted to cover sports at all. It’s still not on an equal basis, but progress is being made. Some women are doing play-by-play at minor sport levels and they will emerge.”

“I think women who watch sports and participate need to let their views be known that they want more women covering them,” Carter said. “Another way is to put pressure on advertisers because advertisers are substantial source of revenue for sports. So pressuring on advertisers, letting them know we want more women participating as announcers, as broadcasters and play-by-play. That will also help to make a difference.”

Men already in the field of sports broadcasting also play a role in encouraging women to serve as play-by-play announcers or commentators.

“Let’s do something active to encourage them to start a career path of play-by-play,” Dickerson said. “It’s kind of a group effort. I think men have to be part of it to break down some barriers and speak out whenever they hear somebody say, ‘She can’t call a football game.’

“No, of course she can. Why can’t she? We have to be able to stand up, talk about it and encourage young women to do this if this is what they want to do.”