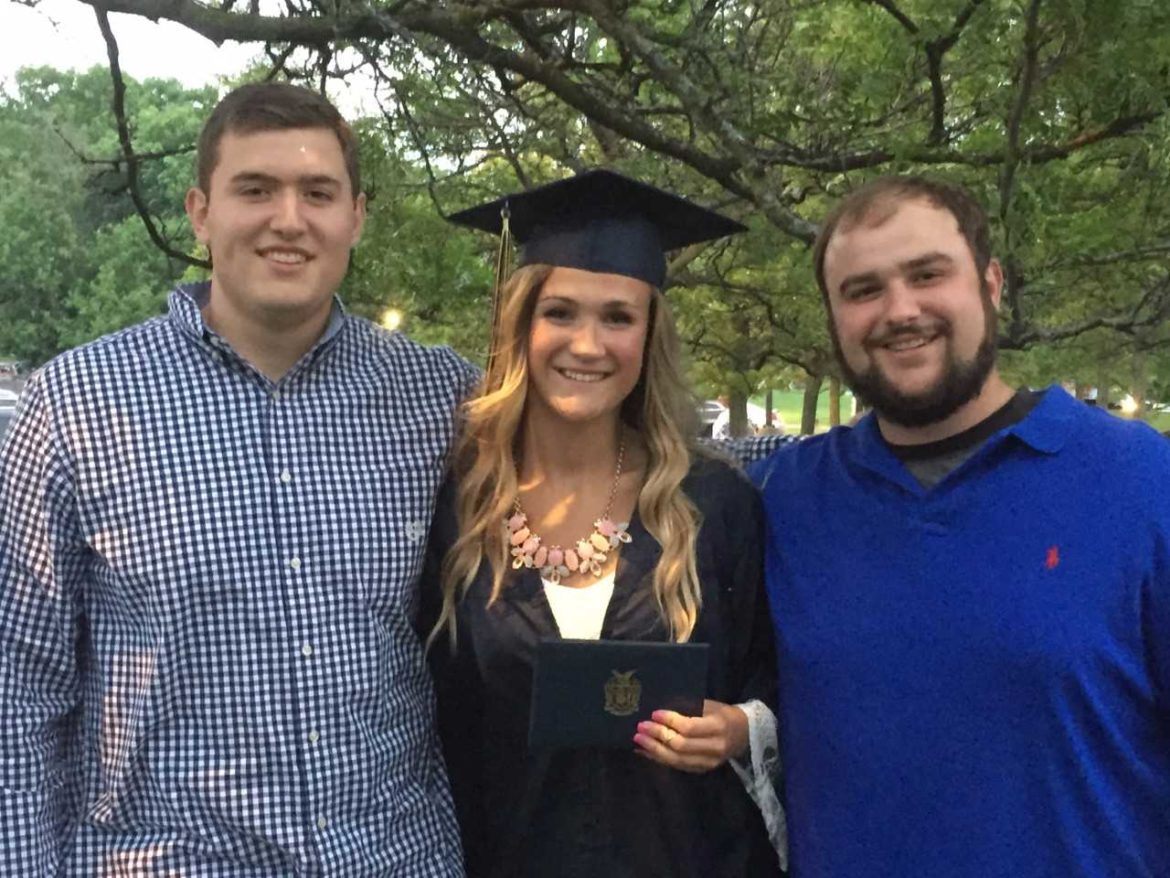 Eric Becker, right, and Jenna Becker, center, show family support for each other at a graduation.

As a teenager, Eric Becker felt like the sports world was in the palm of his hand — anything was possible. He loved football and baseball and even garnered attention from NCAA Division I schools like Central Michigan University and Michigan State University during his career at Detroit Catholic Central High School.

But Becker never got to find out how far he could have taken his skills. Based off of his neurological history, doctors told Becker he had an estimated 20 concussions, most likely from his sports activities. He was crushed.

“The sad thing is I never stopped playing,” Becker said. “I can remember having a headache for like three straight years. Then, I had small stroke and I had Bell’s Palsy. My face didn’t move for like five weeks. That’s when I went in.”

Becker said a doctor finally changed his mind during an appointment before his next football season.

“I was getting ready to play and I went back to the doctor and he said I might not be able to make choices for myself when I was done,” Becker said. “If I was to continue football, my mom might be feeding me the rest of my life.”

The drive to keeping playing

According to a study by Head Case, an organization dedicated to protecting athletes from undetected concussions, in 2012 more than 3.8 million concussions were reported as a result of athletic exposure in the United States at all levels of competition in every sport. That’s more than double the number reported in 2002, and it continues to increase.

More importantly, cumulative concussions increase the risk of irreversible brain injuries by 39 percent. It is that statistic that causes doctors and athletic trainers to tell athletes to stop playing.

“You see everything in the media now about CTE (chronic traumatic encephalopathy) and that was brought to life by former athletes having diminished cognitive effects, mood swings and depression,” said Kyle Newood, a certified athletic trainer for the Recreational Sports and Fitness Services Department at Michigan State University. “It varies by person and it can be a few years or even 20 to 30 years after that they still feel effects.”

Sorting out the medical facts

Dr. Jeffrey Kutcher, national director of The Sports Neurology Clinic at The CORE Institute, said there’s a lot of confusion about concussions and head injuries. Concussions and CTE — a degenerative brain disease — are serious conditions, but he said these terms are frequently confused.

“We have to be careful that we’re using the term concussion correctly,” Kutcher said. “A concussion is a transient injury of function, not structure. They heal within seven to 10 days. People use the term to talk about the hit, but that is an inappropriate use of the term.”

CTE, which can be caused by repetitive hits, is a permanent, physical change to the brain. It’s difficult to diagnose without extensive tests, he said, but getting a concussion doesn’t automatically lead to CTE.

“If you have a bad enough concussion, it’s definitely worth looking into symptoms of CTE,” Kutcher said. “If you’re concussed I want to see you as soon as possible to rule out other possible diagnoses.”

Based on an article in the American Journal of Lifestyle Medicine about “Concussions in Sports,” athletes who sustain three concussions in a single season should not be able to return for the remainder of the season. Furthermore, great care should be taken with clearing them to return for any athletic exposure in the future.

Kutcher said parents and athletes need to consider more than just the number of concussions when making decisions.

“The appropriate way to look at it is that all concussions should be looked at seriously,” Kutcher said. “You could have a concussion that could heal in two days. The reality is that the number of concussions tells only about 10 percent of the story. Every brain produces symptoms at a different rate.”

In Becker’s situation, by the time he sought medical help, the toll of the head injuries had already been taken. In addition to having to give up his dreams of playing Division I baseball, Becker saw his grades decline. After posting a grade point average close to 4.0 through the first few semesters of high school, Becker watched as that number slipped lower and lower.

“I had to relearn how to read, write, study — pretty much anything to do with school,” Becker said. “I used to be able to read things once or twice and take a test. Now I have to go back and read a simple paragraph four or five times.”

Kutcher, who has not treated Becker, suspects his condition has a result of more than just concussions. Other medical conditions may be contributing factors.

“People that have to relearn how to do basic functions usually have a much worse injury than a concussion,” Kutcher said. “They have those problems for a more complex reason than just head trauma.”

Without information at the time about the causes or seriousness of his condition, Becker couldn’t get the treatment or help he needed. Everything seemed like a challenge, and it was also tough on the people closest to him.

“Growing up I went to him for things,” Eric’s sister, Jenna Becker, said. “Most little girls go their parents room when they’re scared of storms. I went to his. So, it was really hard to watch him go through it. Eric was always my big protector.

“I went through a stage of thinking he’d get over it to a stage of almost embarrassment because I didn’t understand how someone I looked up to could crumble like that.”

Becker eventual enrolled at Central Michigan, but said he was forced to drop out since he couldn’t handle regular college classes. Past a certain point, he said his brain just shut off, a problem that persists today. And due to everything he had gone through, Becker said he started developing depression.

“I’m still a happy guy, but for five or six years it was bad,” Becker said. “There are battles that people don’t see. You’re fighting to get out of bed every day. Unless you’ve gone through it you can’t really understand how difficult it really is. You can be the happiest person in the world but all of sudden the smallest thing can set you off at any sort of moment, good or bad.”

Jenna Becker and the rest of their family saw Eric try multiple methods to ease the pain. It took years for him to be successful, but they are now all optimistic about his future.

“Now, it’s just about recovery and little victories in things,” Jenna Becker said. “It’s so hard. No one can see everything that he’s gone through except him.”

“I know what I can and can’t do,” Becker said. “I’m not biting off more than I can chew. I’ve gotten lot better as time has gone on and I’ve taken time off from school to better myself. Now I just have to prepare myself and do three times the amount that I think I need to.”

Struggling with giving up the dream

Becker’s story is a severe case. But many athletes who are diagnosed with less than half the number of head injuries that he had are advised to stop playing.

Sam Modro struggled with the decision to give up football.

“After my seventh (concussion), I was carted off the field during a (high school football) game on a stretcher,” Modro said, a 22-year-old from Deerfield, Illinois. “That clicked with me and scared me a lot. I never thought there was life after football at that young age.” Modro got this final concussion with only a few weeks left in his senior season. At the time, he was being recruited by schools such as Butler, Illinois State, and Wisconsin, Whitewater. Wanting to try to keep his football career alive, Modro said he did his best to pass the concussion protocol, a baseline neurological exam to test for symptoms, so he could play in those last games.

“I’m definitely happy for my health and safety that I stopped playing,” Modro said. “At some point you have to realize what you’re actually doing to yourself.”

Although Modro decided to hang up the cleats before his injuries could have gotten worse, he is still feeling complications.

“I actually went in to the doctor my sophomore year of college and was diagnosed with post-concussion syndrome,” Modro said. “You can tell you’re losing memory, you get headaches often, and it can be hard paying attention. I’ve definitely been different, and I wish I could see what my mind would look like more clear.”

There is no easy cure for Modro’s condition, but it is treatable.

With everything he has gone through, Modro has some advice for youth athletes.

“You hear about it all the time but if you feel woozy you need to stop,” Modro said. “Even as hard as it is in that moment, you need to watch out for your health. Know your body. Know your limits. Be smart.”

Coaches and athletic trainers are trying to avoid further injury and potential future problems when they take athletes out of the game after suspected head injuries. That’s why Newood said it’s important for kids to tell someone if they think they have a concussion.

“If an athlete believes they have a concussion, they really should be pulled from the game,” Newood said. “That’s the part that sucks as an athletic trainer is telling kids that they’re done, but it’s really not worth the risk.”

This article has been updated from its original version to reflect additional reporting and to clarify some medical descriptions.

Jess is a high-energy sports journalist with experience going all the way back to his 8th grade years. He has worked with Foxboro Cable Access, Lax Sports Network, Fox Sports, and Big Ten Network.