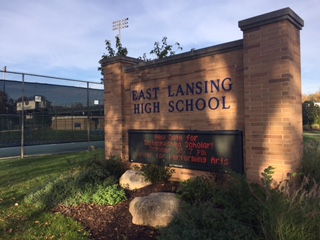 With a 47-2 record during the last two seasons, Finamore adds another line to his resume – that of  the 2016 Michigan High School Boys basketball coach of the year.

Nearly 20 years earlier, this Brooklyn, New York native came to Michigan to work on Tom Izzo’s staff as a graduate assistant from 1999-2001.

Since then he’s coached at Jackson Community College, St. Peter’s University in New Jersey and worked one-on-one with several college and professional players in Michigan.

Finamore had a troubled past and tough upbringing, but his love for basketball and urge to give back got him into coaching. Finamore’s main message is that having good character is important, and that’s the culture he’s built at East Lansing.

This story also features East Lansing High School Senior and University of Michigan recruit, Brandon Johns, and how Finamore helped him throughout his high school career.

Johns, along with his teammates have learned that Finamore isn’t there to just teach them basketball. He wants to make them great players and great people.

Jon Simon is an aspiring sports journalist with a concentration in broadcasting. Jon is a senior at Michigan State University and will be graduating in May, 2018. Jon has interned for WGR 550 AM in Buffalo, NY and does volunteer work for MSU's student radio station, WDBM 88.9 the IMPACT.