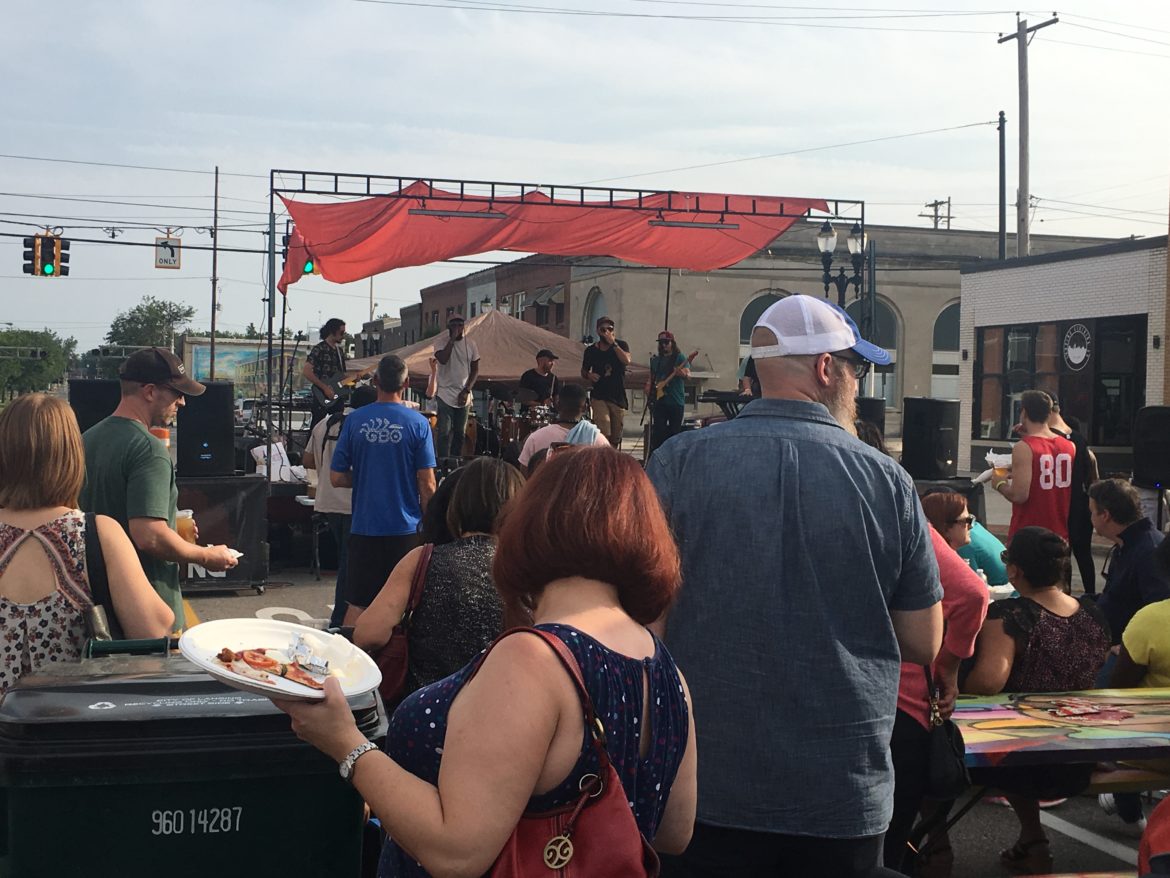 Local hip-hop artists and All Of The Above members Ozay Moore and Sareem Poems perform in Lansing's REO Town. Local hip-hop artists and All Of The Above members Ozay Moore and Sareem Poems perform in Lansing’s REO Town.

Monk Matthaeus loves hip-hop. All he wants to do is share his passion. And so he does, in classes at Ottawa Hills High School in Grand Rapids from 3 to 5 p.m. Mondays, Tuesdays and Wednesdays.

“Well, hip-hop is just like about drugs and violence and sex and misogyny.” That’s what Matthaeus says some people tell him when they hear about his classes — people, he warns, who don’t know what real hip-hop is. Ozay Moore, co-founder of All Of The Above says Lansing has the ingredients to replicate the success of other Midwestern cities. With the same cold winters and sunny summers, Detroit (pictured above) has given rise to national hip-hop musical acts, such as Eminem and Big Sean.

Seeking to dispel the myths, serve the culture and help guide hip-hop forward in Michigan, Matthaeus and Ozay Moore founded All Of The Above in 2010, a creative collective designed to improve and educate society through hip-hop.

Recently licensed as a nonprofit, it’s growing and acquiring a new home in Lansing for 2018.

The first myth they took on was that hip-hop is just a musical genre.

“For me personally, it’s more than a genre,” said Mikeyy Austin, a Lansing-based recording artist. ” It’s a culture.”

Moore and Matthaeus are stewards of the culture in Lansing and Grand Rapids, respectively. Austin, an All Of The Above alumnus and now a program teacher, said hip-hop represents times and situations. Home to many local hip-hop shows, The Loft will hold All Of The Above’s “The Jump Off,” a beat battle taking place Dec. 16.

Many would be surprised to learn that what’s heard on the radio often isn’t hip-hop music. In fact, artists from within the genre reject the poppy sound and the celebrity glitz that often gets played by mainstream media.

“We exist as a rebellion against popular culture,” Matthaeus said. “What’s sad is what people consider to be hip-hop many times is not, and it’s really just pop culture’s version, or perversion.”

Getting out the message

Moore, originally from Seattle, decided to open up All Of The Above not only to change perceptions but to regrow and home grow the culture of hip-hop in Lansing. In 2018, they will be moving into the REACH Art Studio in Lansing, located at 1804 S. Washington Ave.

As a creative unit, All Of The Above offers artists a chance to interact, network and grow together. As an academy, it holistically informs up-and-coming students about the real culture so they could preserve it, hone it and harness its power, Moore said.

“What I’ve noticed about youth here is, because of that revolving door coming in and out of Lansing, there hasn’t been a whole lot of culture that has stuck,” Moore said, but noting that MSU was ripe for a breakout. “This is the perfect climate to develop an artist.” While music is a crucial element in hip-hop, one look at the lessons of All Of The Above proves there’s far more than just a microphone and turntables. Breaking, emceeing, writing, graffiti, beat-making and DJing are taught at All Of The Above.

The classes themselves focus on context. In Moore’s opinion, for artists to further the culture, they have to understand the history. At All Of The Above Academy lessons, there are discussions and lessons about the history of hip-hop, in addition to applying techniques and learning skills.

“One of our core principles is leadership, you know, responsible leadership of hip-hop culture, where we’re taking ownership of our content,” Moore said. “Especially in AOTA, looking at it through the lenses of, ‘Does this line up with our core beliefs?’”

Even though Matthaeus’ definition of hip-hop makes the culture seem marginal or disjointed, that’s changing. All Of The Above now has official nonprofit status, and on December 16, All Of The Above will host The Jump Off, a showcase at The Loft with over 200 responses already on Facebook.

Beyond classes, hip-hop culture is visible. Fashion, vernacular and body language all speak as loudly as rhymes on a radio.

“I can be a doctor, and I can be a hip-hop doctor,” Matthaeus said, adding that hip-hop manifests itself in everyday life.

Employing the help of over 50 artists and educators, All Of The Above Academy seeks to instill the values of hip-hop into its students, future influencers who will drive the culture going forward. Yet, one of the biggest impacts on Austin was the opportunity to see the workings of big-time artists up close.

Austin wants to emulate the career path of All Of The Above leaders like Moore, who has toured around the world. Moore, formerly known as Othello, is dropping (releasing) in February his album “In The Wake Of O.” Mac’s Bar sits right off of US 127 and Michigan Avenue in Lansing. A musical hotspot, Mac’s has hosted Moore and other local hip-hop artists.

“A lot of times you look at it as just the song or the recording and not really the whole professionalism that goes with it,” Austin said, who is hoping to premiere a mixtape and album in 2018 and eventually tour.

Austin, the All Of The Above Rookie of the Year at 19 years old, said he wants to grow the Lansing scene.

Most encouraging for Moore, the program is starting to develop a base. With the new center in Lansing, nonprofit status and growing programs, Lansing’s hip-hop scene is beginning to bulge.