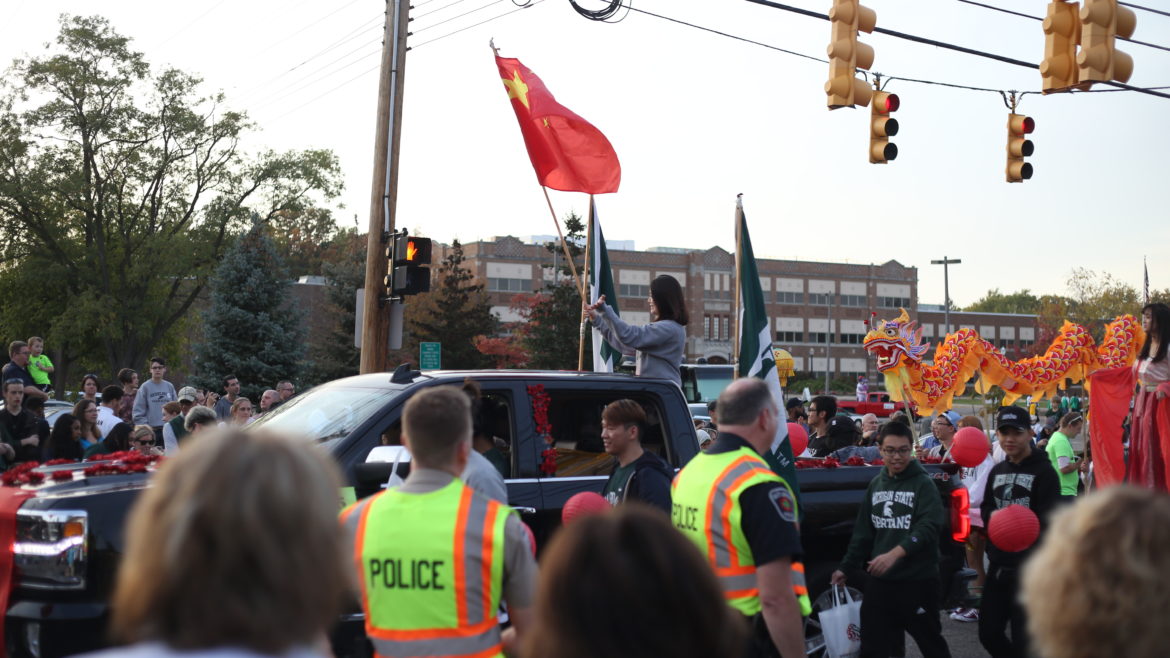 Police have increased their presence at Michigan State University events, including the 2017 homecoming parade seen here, after receiving general threats against sporting events.

The threats led to increased security at university events — a recent example of the challenge colleges and universities face securing their campuses.

“These are measures designed to prevent, deter, and protect against possible attacks,” MSU School of Criminal Justice assistant professor Phil Schertzing said. “The police are always challenged to balance the convenience of fans, players and performers or staff, and vendors attending events, with practical considerations for handling the ingress and egress of large crowds, and public safety.”

One of the policies announced by MSU police was to ban all bags from  indoor athletic venues.

“I definitely support the no-bag policy,” said Shiwei Xu, a football season ticket holder. “For every home game, a huge crowd comes to the stadium and you really can’t tell what they are bringing with them so the policy will more likely reduce the probabilities of any threats. It’s good for public overall.”

Police also were more visible at popular events, including the university’s 2017 homecoming festivities.

“There were more police cars than before around Spartan Stadium — not only MSU police, but East Lansing police and sheriffs,” Xu said. “Also, there were two police officers at each entrance to the student section, where I was.” A police car blocks traffic near Spartan Stadium after the 2017 homecoming game. Police have increased their presence at university events due to general threats against the university.

Lesson learned from the past

The Oct. 1 shooting in Las Vegas left 58 people dead and 546 injured. The incident is the deadliest modern mass shooting committed by an individual in the United States.

It serves as another reminder to university officials on the need to be prepared. Officials recommend anyone caught in an active shooter situation first try to escape. If that’s not possible, individuals should hide and, in a last resort, be prepared to fight back.

“Most of those situations historically are over within four to five minutes,” MSU spokesman Jason Cody said. listen “So people should remember that the police are coming. They are going to be there to help.”

Schertzing said it’s important for people to be aware of what’s happening around them..

“One of the key things people should do is maintain situational awareness,” he said. “Be aware of potentially dangerous or suspicious situations, circumstances or behaviors by other people, be aware of things like emergency exits, or where and how you can get help from security or safety officials.”

Effective communication is key
Communications become even more challenging on a large campus like MSU.

“In this social media world, it’s very easy for rumor and misinformation to get spread,” Cody said. “Sometimes it does get damaging and can cause people to make bad decisions.”

During a potential crisis, officials have to get information out quickly to help counter those problems and to keep people safe.

“Countering inaccurate or speculative reports or information in social media and even the mass media is no doubt a major challenge,” Schertzing said. “Probably no matter what methods or approaches are used, it is practically impossible to alert, notify or reach everyone immediately with the specific, accurate, important information. But they must still try to reach as many as possible.”

Xu said more education is needed because students have limited information about how to respond in an emergency.

“I would suggest the university to give us more knowledge on how to escape from different facilities under different situations and what should we do to minimize the potential dangers if we couldn’t get away immediately,” Xu said

“Every institution of higher education, as well as every company, government agency, school, faith-based organization and local community faces the challenge of trying to inculcate a culture of preparedness, and trying to stay ahead of the curve in terms of preparing for ever-evolving threats and hazards,” he said.