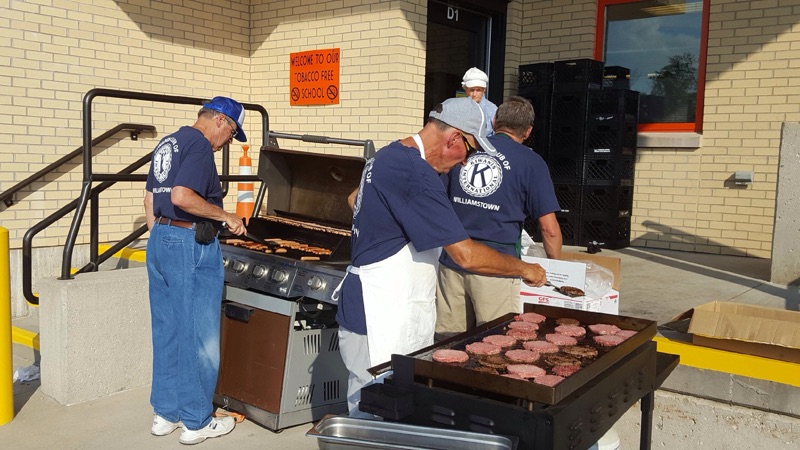 The recurring theme for the city of Williamston is its tight-knit community and the town’s eager willingness to come together and help out with anything in anyway that they can.

Take the Kiwanis organization, for example, something that embodies all of what  Williamston’s values and stands for as a community. Kiwanis is a global organization, entirely comprised of volunteers who are devoted to changing the world for the better, one community, and one child at a time.

“Kiwanis is all about the kids. Whatever the kids need, we do for them,” Williamston Kiwanis president Teri Nelson said. “It’s an organization where we do what we can to make things possible for the kids in the community.”

The Kiwanis Club of Williamston was first established in 1924 and since then has gained membership and recognition amidst the town. The name “Kiwanis” means “we trade” or “we share our talents”. The name was coined from the American Indian expression, “Nunc Kee-wanis.”

Nelson says the Kiwanis club strives to ensure that everybody is able to get what they need, “While yes we [Kiwanis] are mainly about the kids, we are about the family and the community, that’s what we’re all about.”

Kiwanians, as they’re called, are strictly volunteers, according to Nelson, who seek to change the world through their service to their children and communities. Members of the organization help to mentor the disadvantaged, develop youth leaders and do so much more for the community.

“Our mission is simply to help children in our area however that may be,” Williamston Mayor Pro-Term Sean Bertolino said. “Through private donations, fundraisers, and community support, the Williamston Kiwanis gives directly back to the schools, local charities, and programs which support children.”

Throughout their 94 years of service to its community and children, Williamston Kiwanis has built the Tons O’ Fun Tot Lot in McCormick Park, first in 1943 and then completely remodeled and updated back in 2007. In 2014, they built the two sand volleyball courts that can be found today in McCormick Park.

In addition, Kiwanis has participated in the “Dictionary Project,” which they provide personal dictionaries to third graders in several of the local schools. Around Christmas time, the club has been very well known for its “Christmas Toy Project”, throughout which, they partnered with the Williamston Food Bank to deliver toys along with a big basket of food to people in the community who are in need.

“I know of many kids who have benefit greatly from the Kiwanis organization,” Okemos resident Parker Pacic said. “I think it’s a really great organization considering how involved and willing they are to help out people who could use it.”

Kiwanis isn’t just a local organization, with there being 8,000 clubs in 96 different countries throughout the world. There are more than 260,000 adult members and approximately 320,000 youth members involved. There’s just over 25 members involved in the Kiwanis group in based in Williamston.

“They [Kiwanis] do so much for our communities but our membership simply is down,” Bertolino said. “Most people hardly know they exist or what they do so I wanted to whatever I could to help.”

Kiwanis plays a huge role in the Williamston community and their efforts do not go unnoticed. In fact, the organization was just selected as the Williamston Area Chamber of Commerce award recipient for Service Group of the Year. Whether it’s sponsoring the Boy Scout Troop 63, Relay for Life, the Crop Walk, or the Literary Coalition, those are just a few of the many causes that the Kiwanis Club supports. Because of the club giving the children the hope to learn, experience, dream, and succeed, these kids have much more opportunity, largely in part to the large hearts of the Kiwanis club.