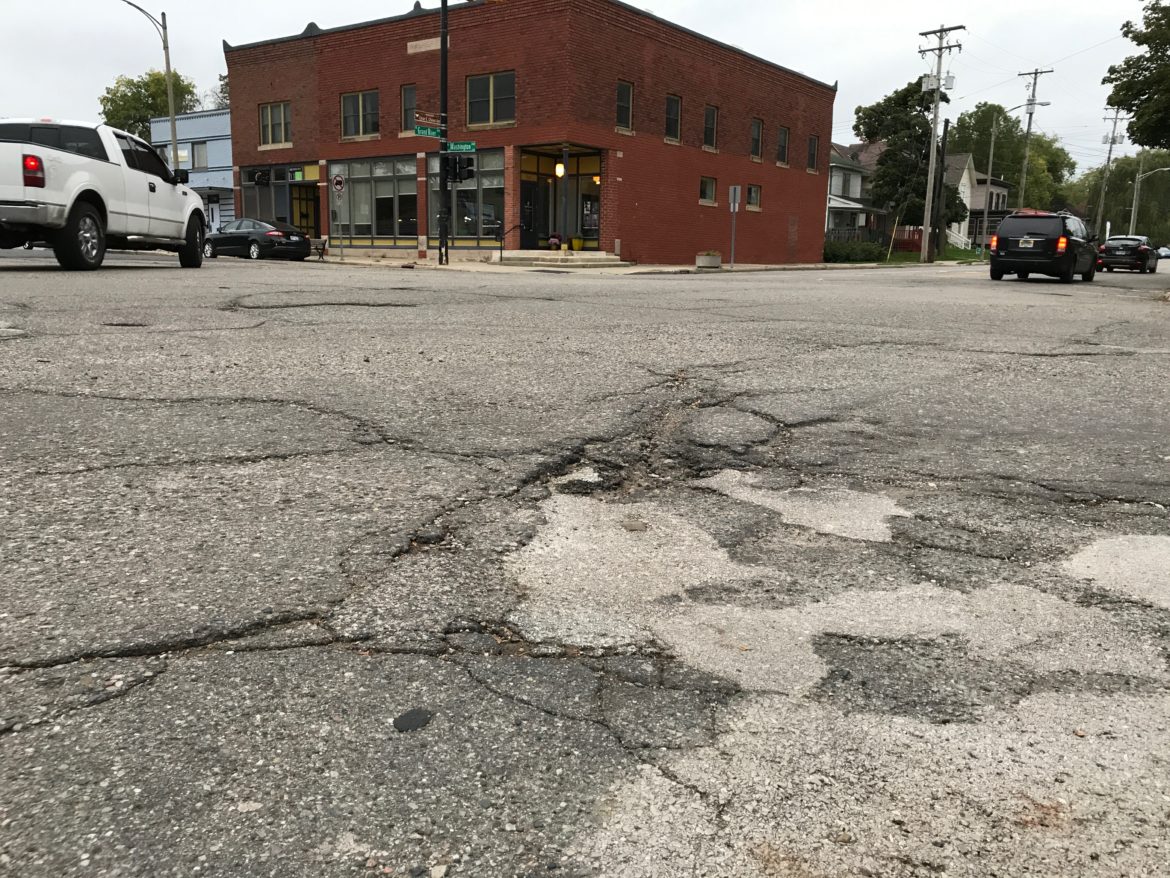 Every Michigander knows that roads in the state aren’t the best and Old Town residents have experienced that first-hand.

“The roads are just not smooth in anyway shape or form,” said Jamie Schriner, Old Town Commercial Association board president.

The state of Michigan has a budget of $3.5 to $4 million for capital improvements on roads or structural changes each year, said Chad Gamble, chief operating director and director of public service for the City of Lansing.

Gamble said the major problem with trying to maximize road life is that the “needs of the roadway far far outweigh and exceed the amount of funding that we have for it.” 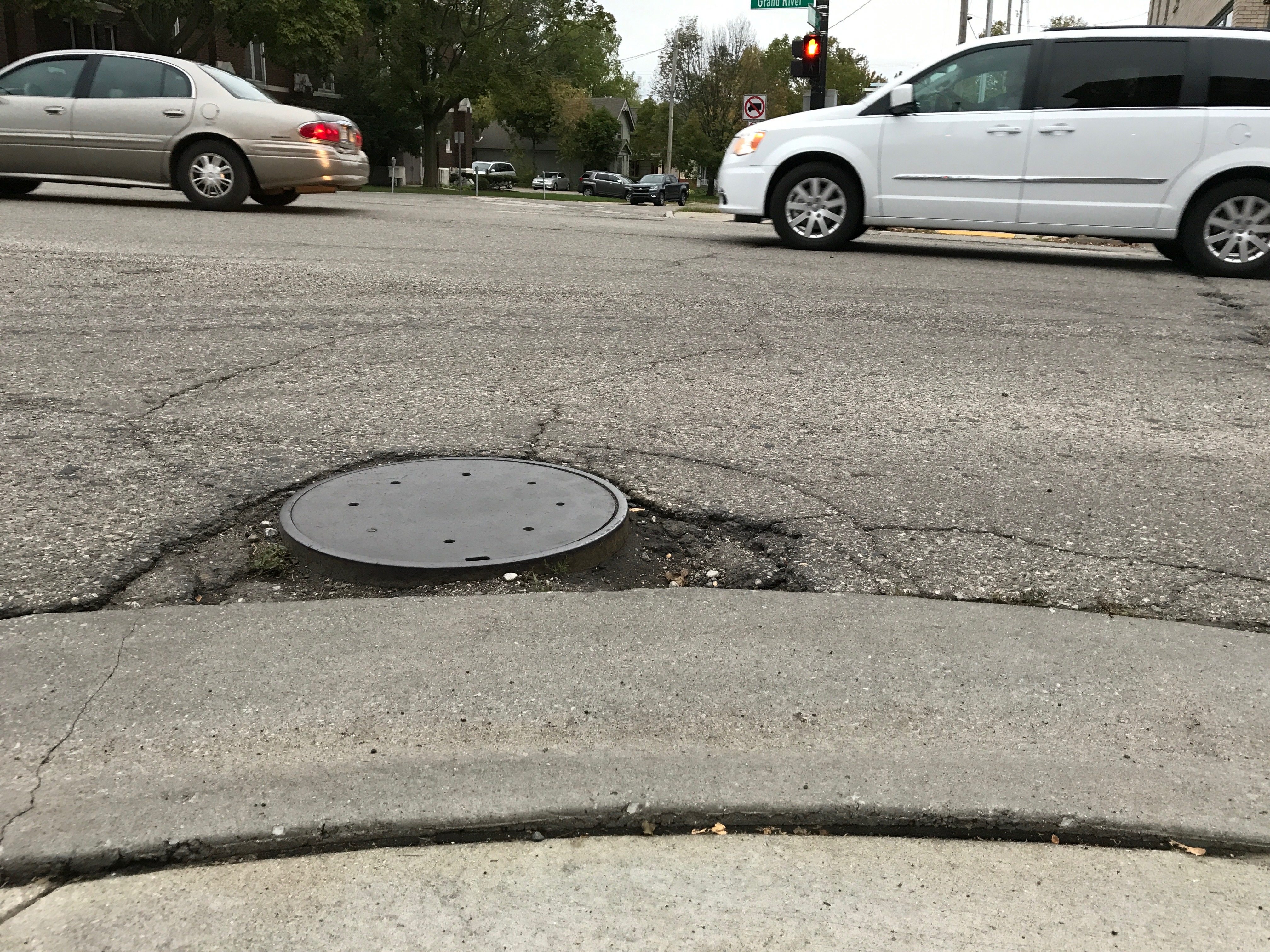 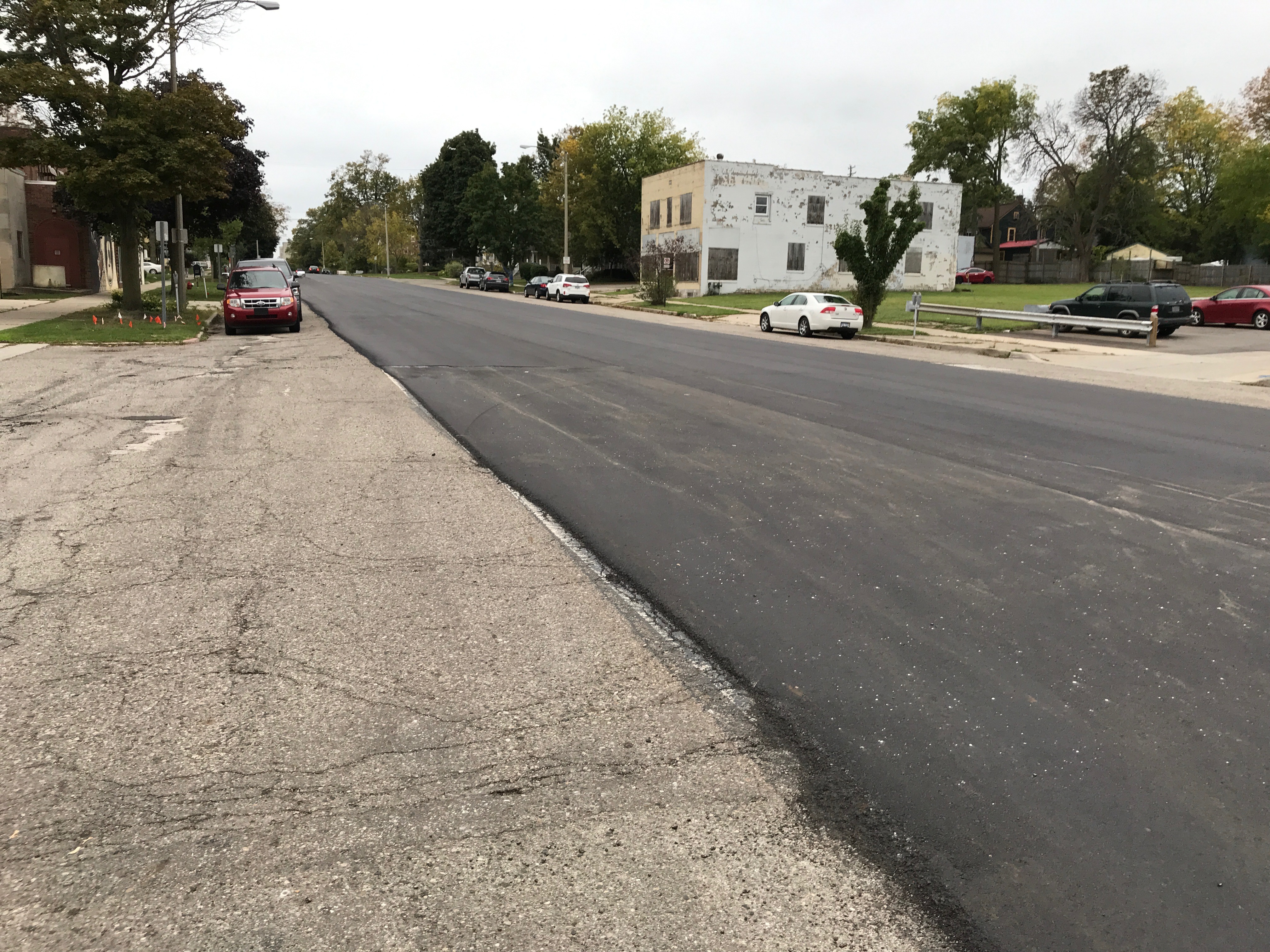 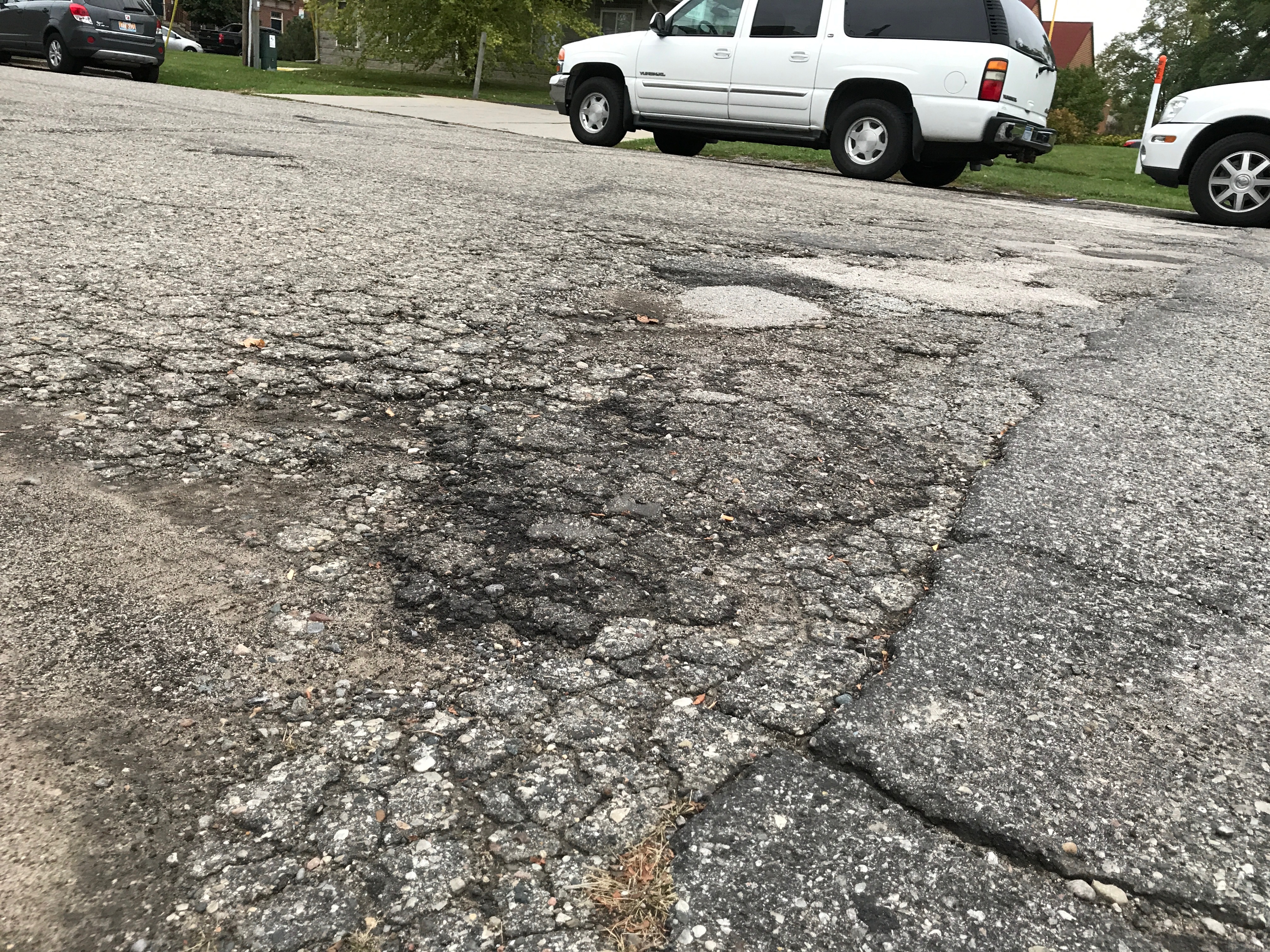 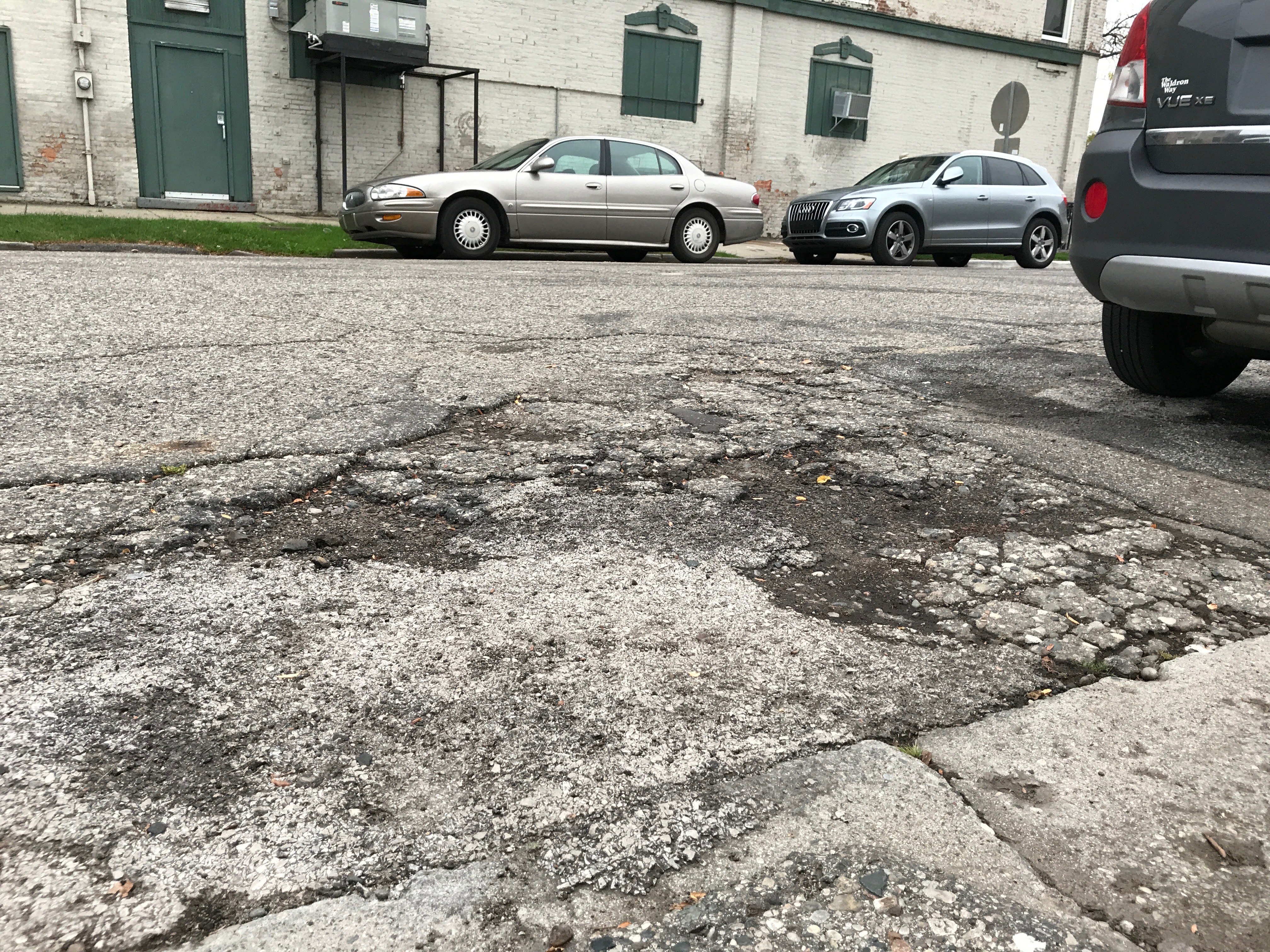 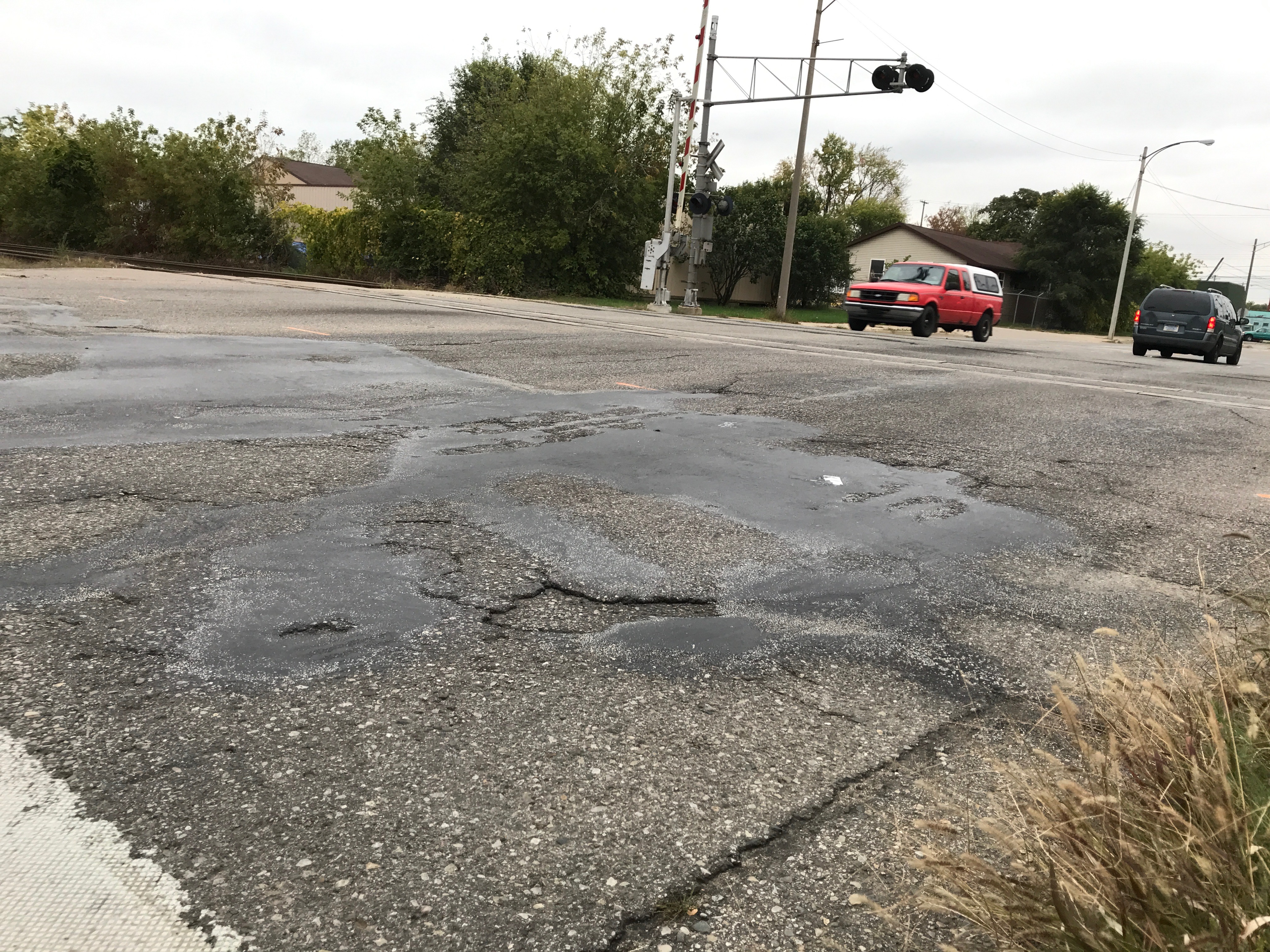 Patched cement on the roads by the train track on E. Grand River Avenue 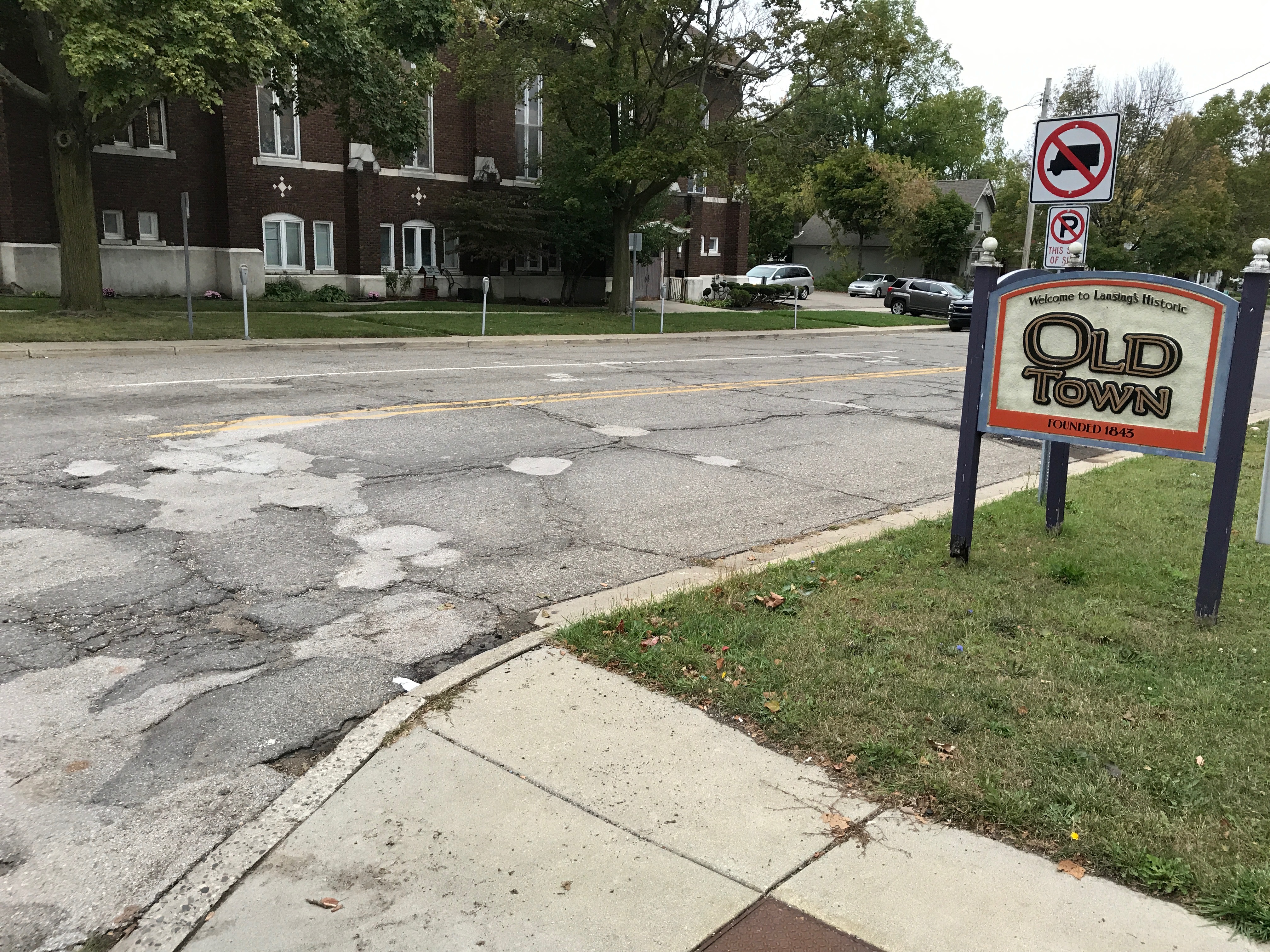 Schriner said they could then let those less trafficked areas pick where work is needed in their neighborhood.

“I think I’m in an area that probably is set at a slightly higher priority because of the additional traffic because of the businesses,” Schriner said.

Gamble said that in city of Lansing, 75 percent of miles driven are on 25 percent of road networks.

That means that those roads that receive more traffic are going to need more of an upkeep.

“When you have a road condition or need on a major street, it will deteriorate at a much faster rate than a neighborhood or local street,” Gamble said.

There are a couple factors that contribute to poor road and sidewalk quality.

He also said Michigan allows heavier vehicles on the roads compared to other states.

With major roads having a higher speed limit, more damage will occur when a vehicle hits a pothole compared to neighborhood roads.

For neighborhood roads, that means they might receive a little less maintenance.

“Not to say that it’s not important for us to maintain it, but when you don’t have enough money to maintain everything, one has to make difficult choices,” Gamble said.

Reese said the potholes need to be fixed as well as “repaint the lines throughout the roads so people know if they have to turn a certain way.”

Schriner said some Old Town roads would be better off unpaved.

“In some spots it almost seems as if it would be better if they were gravel roads because they’re just so bumpy from being patched and not being appropriately repaired,” she said.

Schriner also said Washington Avenue and the train tracks on Grand River need to be addressed.

Gamble said that each taxpayer pays a certain tax that goes specifically for roads. But residents like Reese wonder where this money is going.

“We’re already paying taxes for the roads to be fixed,” Reese said. “When was the last time a main road was fixed?”

Schriner said she would even be willing to pay more in taxes to have the roads maintained more.

She said not just the roads in neighborhoods need upkeep, but the sidewalks in Old Town need maintenance, too. 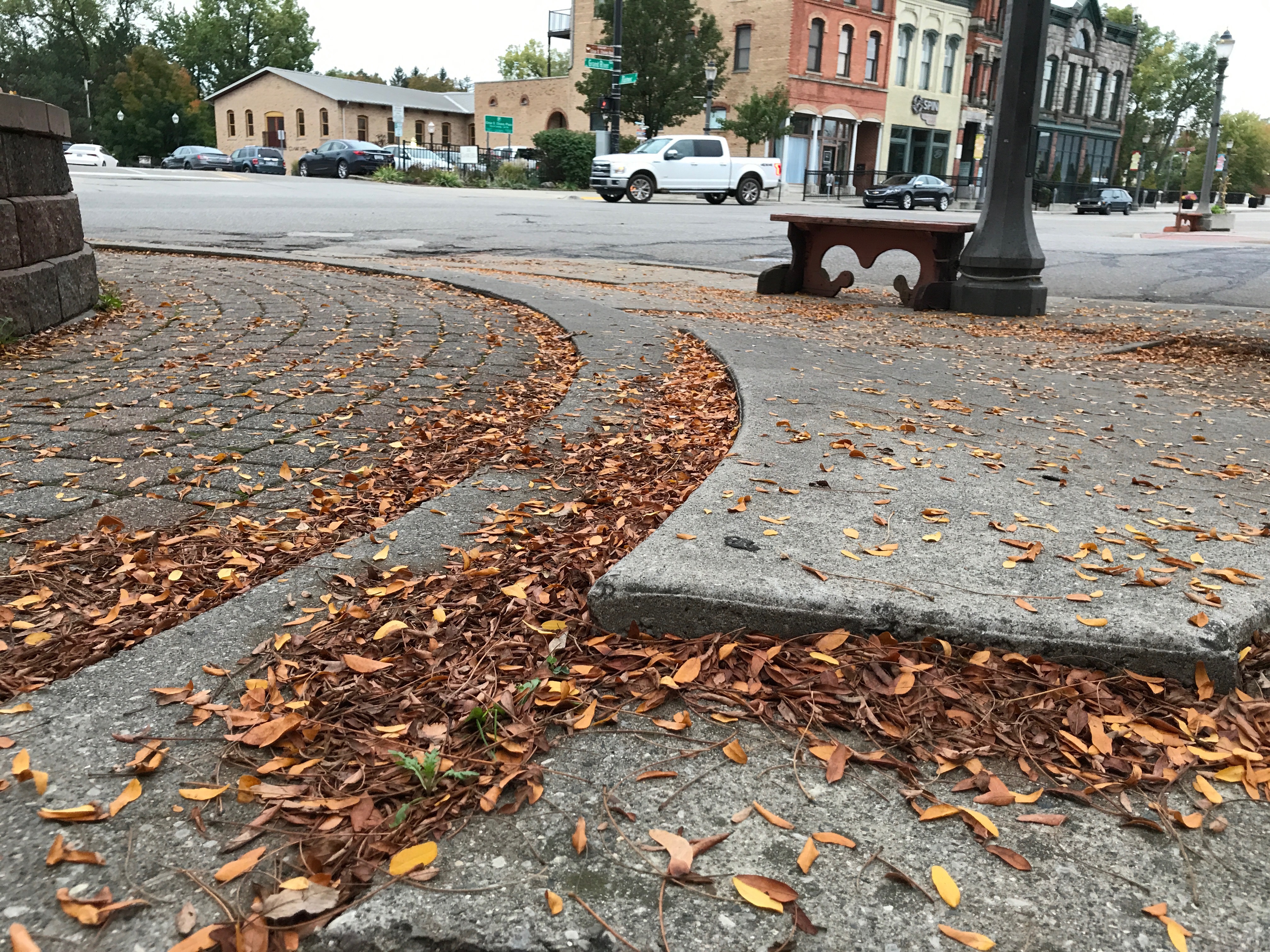 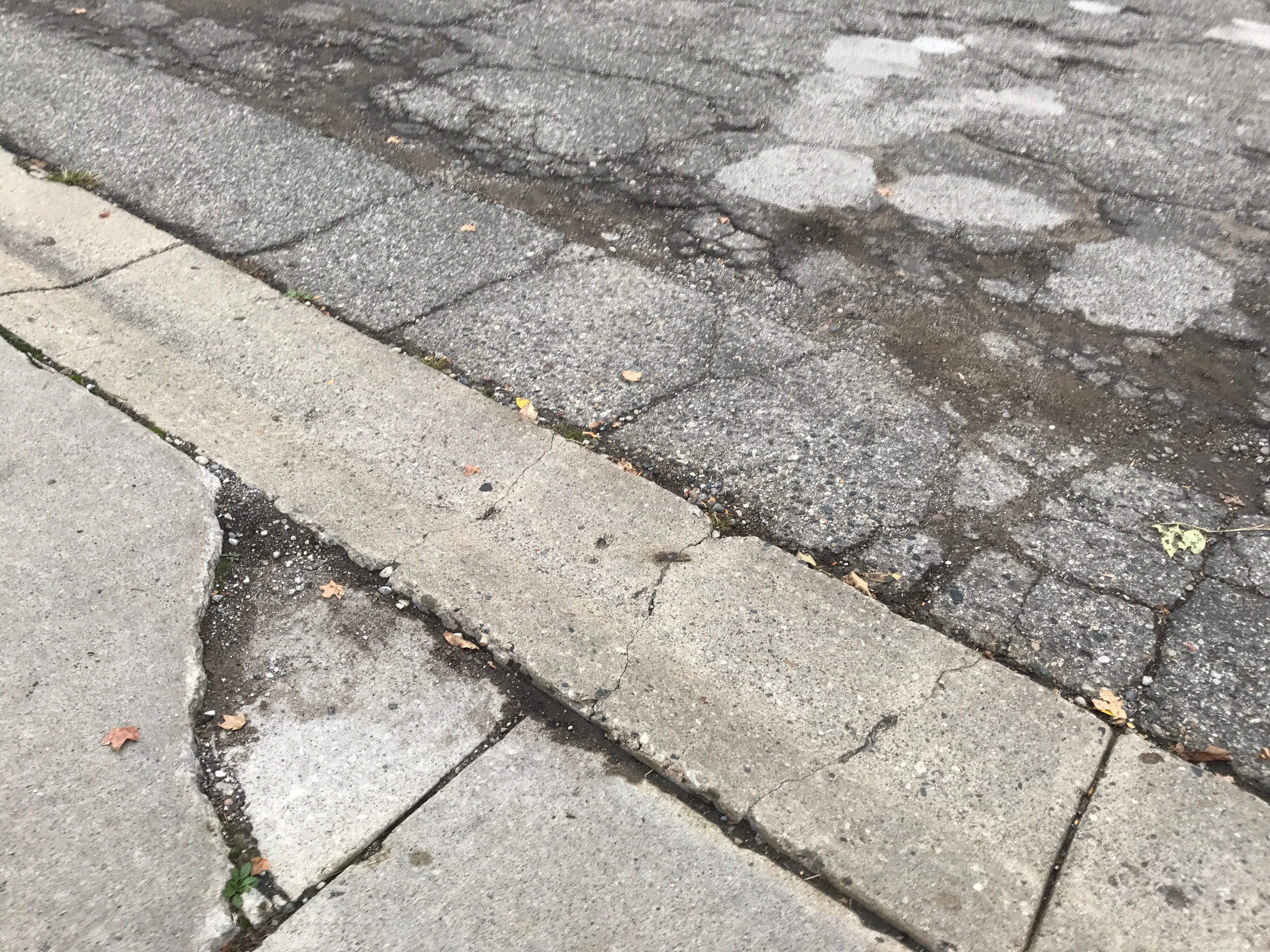 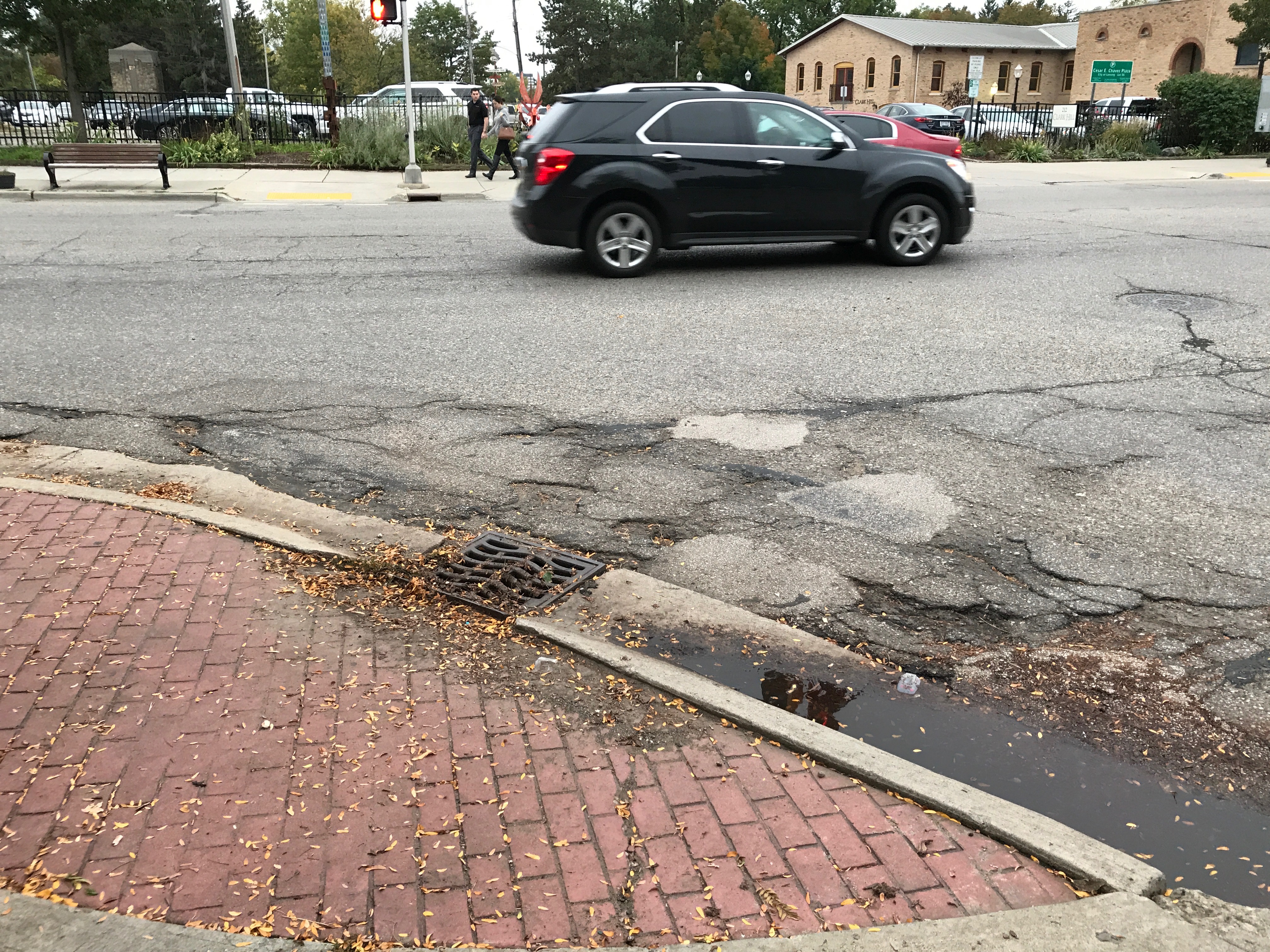 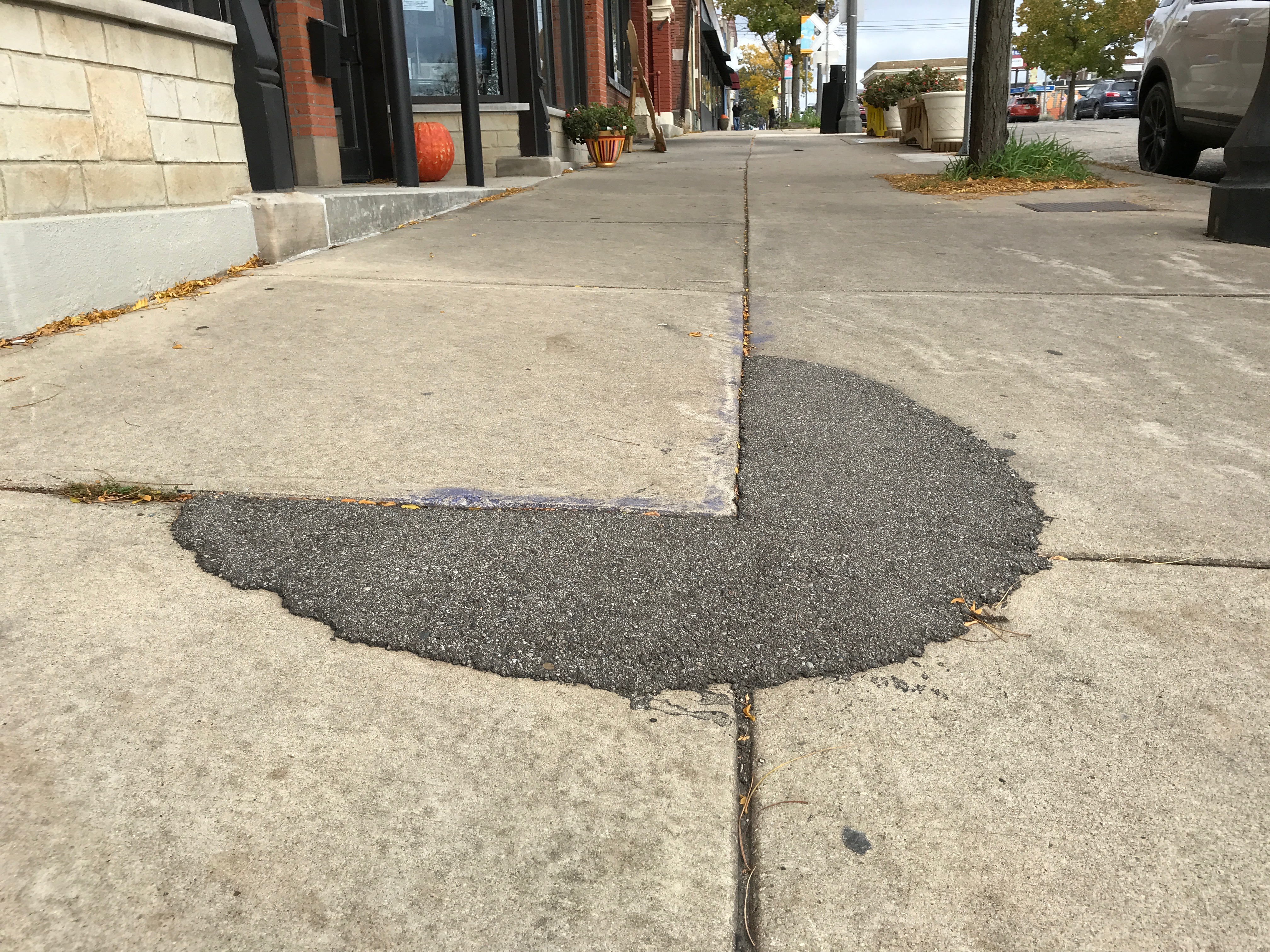 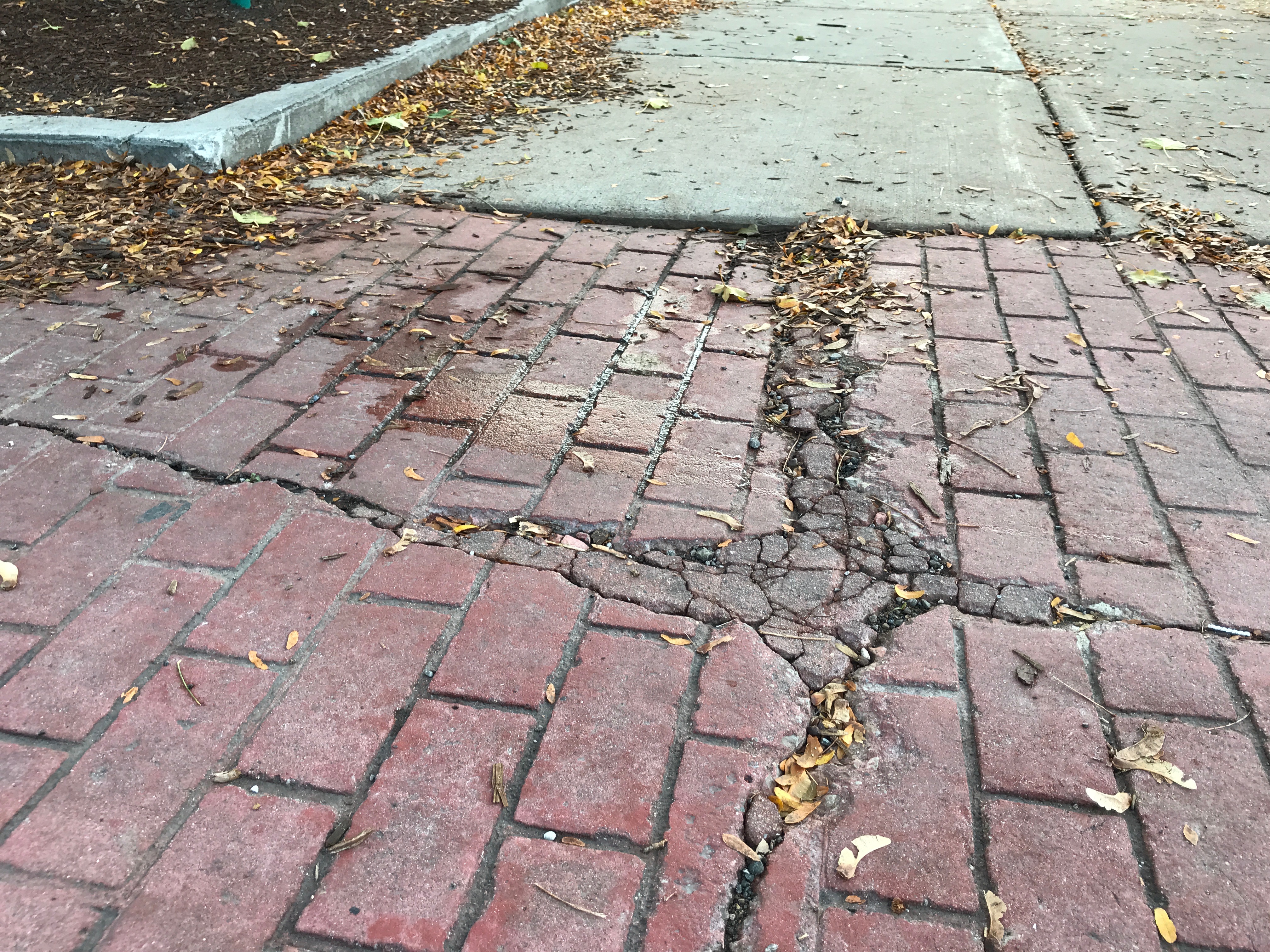 “We’ve got spots where some of the sidewalks have peaked and they’re completely uneven and it makes it really dangerous for people,” Schriner said.

Gamble said when it comes to sidewalks, temporary repairs are performed first and, if it needs to be completely redone, they have to follow the budget.

“There are just spots where they aren’t level, which can make it pretty dangerous especially if you’ve got somebody who may be disabled in some way, if somebody’s blind or using a walker or a cane or in a wheelchair, so that definitely is something that I think needs to be addressed,” Schriner said.

“I wouldn’t say it stops people from coming to Old Town because of it. Do I think in the future it could if they don’t upkeep them? Yeah,” Reese said.