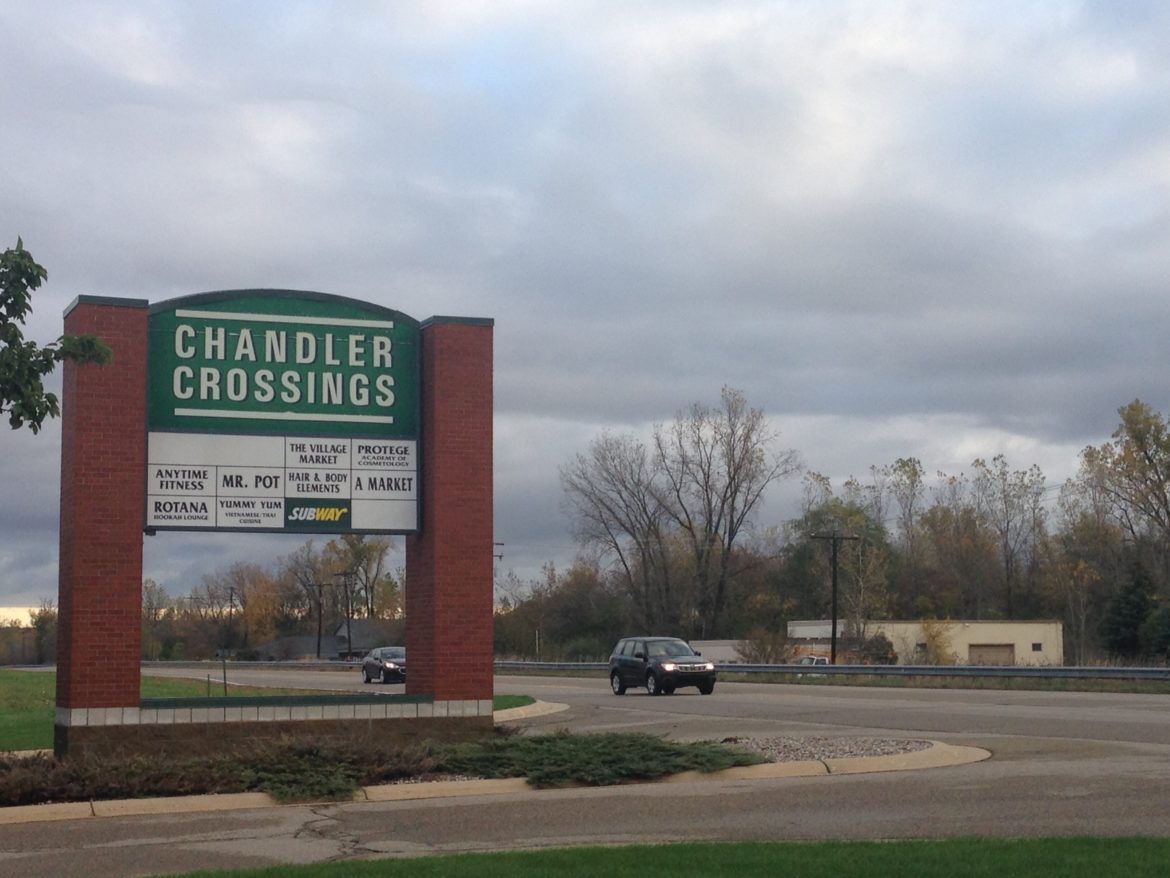 A sign welcoming travelers to Chandler Crossings. A new student housing development is expected to begin construction near this sign within 30 days, according to the developer. Photo by Riley Murdock.

If one were to send mail to someone living at Chandler Crossings, their mailing address would suggest they live in East Lansing. However, the cluster of student neighborhoods north of MSU is actually under the jurisdiction of Bath Township.

“It’s a more dynamic area for sure, in terms of the pace of development and the number of units developed,” Kramer said.

“It’s under our jurisdiction under zoning because it accesses our infrastructure, our sewer and our water lines,” Bath Planning Department Director Brian Shorkey said.

A bus route runs from the neighborhoods to campus and one can traverse between the two points using the same road. Though Kramer cites ease of access to campus as a reason for the cluster of student housing, Chandler Crossings lies roughly 2.5 miles from MSU.

So, why do developers choose to build student housing in Bath rather than closer to East Lansing?

“The land costs less, for one,” Will Randle, a developer who has worked on projects in Bath, said.

“There’s also a higher density in units per acre that’s allowed in Bath Township, so that is the primary difference is density, that’s what drives cost ultimately in our business.”

Randle is a developer for “Chandler Lofts,” a new project that, according to Shorkey, will bring 255 loft apartments and 24 townhomes to the area. The development will also host nine commercial businesses, moved from existing storefronts on the development site.

Randle’s projects have focused on student housing, particularly one-to-two bedroom units. Kramer said developers in the area have typically aimed to meet demand for off-campus housing, and Randle said there is a shortage of one-bedroom housing on the market.

“Generally speaking, I think Bath just has more land to develop than as you go closer to East Lansing,” Kramer said.

“Maybe there are some efficiencies created already with the current student housing in the area, and then adding some additional housing might make sense.”

A site plan for Chandler Lofts was approved by the Bath Planning Commission at its Oct. 24 meeting. Randle said construction documents will be submitted for approval next, and he expects construction to begin within 30 days.

Beyond any systematic benefits to building in Bath, Randle said he’s enjoyed working with the town on developments.

“It’s a very user-friendly system, the administration here and the powers that be really reach out and work with us well and so we enjoy that,” Randle said.