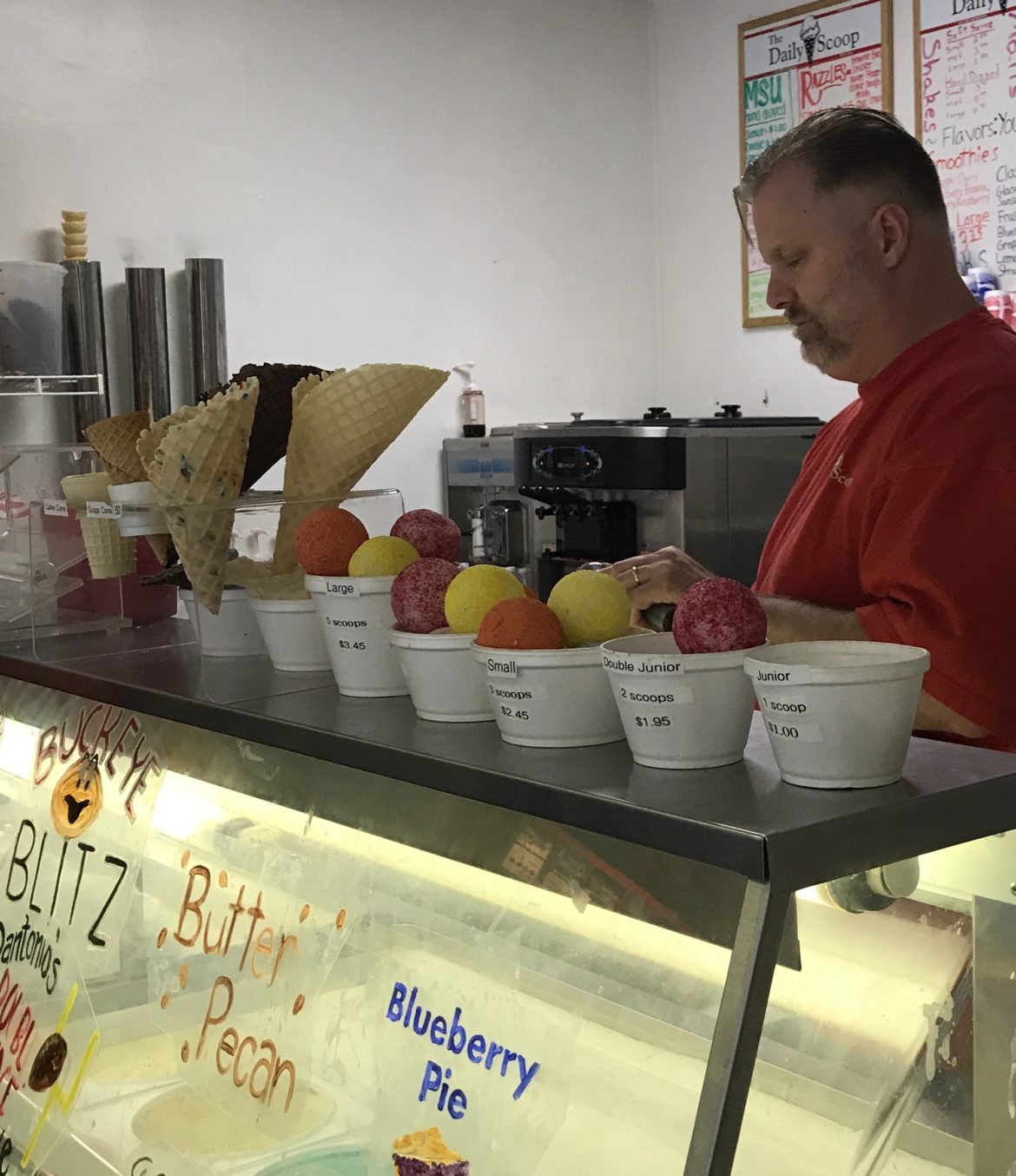 Shawn Sodman has been scooping ice cream ever since 2011. Everyone can enjoy a nice scoop of ice cream. Shawn Sodman enjoys the smiles he receives with each cone he hands out, and serving ice cream to customers is just the beginning for this local business owner. He enjoys the community that he is a part of and having regular customers to get to know every day. Sodman owns The Daily Scoop Ice Cream Shoppe in downtown Mason. His store offers numerous flavors of ice cream, as well as cheeses courtesy of the MSU Dairy Store. In the winter, aside from the dairy products available, the shoppe offers tomato basil soup and grilled cheese. Also, Sodman is also a writer with a sequel book coming out very soon.

The Daily Scoop Ice Cream Shoppe is a local favorite and was voted the number 1 ice cream store in Mason on tripadvisor.

“About eight years ago, this was an ice cream shop already. It was called Turtle Tom’s back then and I noticed when they closed down in the fall but there was a for lease sign in the window as well, so I made some phone calls to try and figure out what was going on with that,” said Sodman. “What I found out was that it was going to go out of business so I asked him how much it would be to sell his equipment. It just happened to work out. I was the first one to get in contact with him and after that I got a loan from a friend because no banks were going to loan back then seven years ago, and probably still not today, so I just bought the business and changed it up.”

Sodman said that it is most rewarding being around the children. He loves to make them happy.

“Just seeing them smile when they get their ice cream is rewarding. We put a little face on it sometimes and that’s the most adorable thing,” said Sodman. “And the fact that this is a small town, I’ll go to Meijers and get recognized by people and they’re like “it’s the ice cream guy!” so that’s always fun, too. The small-town community makes it easier to have regular customers and get to know them.”

Sodman lives in Mason with his wife and three kids.

The dairy treats and good service are what keeps the regular customers year-round.

“My favorite flavor is the blueberry pie. I come here at least once a week,” said Ashley Dery, a young woman living in Mason. “I like the fact that it is locally owned. I love supporting the local businesses.”

“The favorite flavors are tied between the buckeye blitz and the Dantonio double fudge. Buckeye blitz is made with peanut butter, which is really popular, and Dantonio’s with caramel and chocolate,” said Sodman.

“MSU ice cream in Mason is a great idea,” said Richard Allison, a retired faculty member in the Department of Plant Biology at MSU. “And they’re open all year.”

Besides owning a popular ice cream shop, Sodman is also an author. He wrote his first book “Runefell Crossroads” three years ago, and took off with his writing career from there.

“A few years ago I just wanted to give it a go. I basically started to write a book based on the role-playing games like dungeons and dragons that I played with my own kids and family and it started off an adventure that expanded and it grew to basically what’s going to end up being a trilogy,” said Sodman. “I completed it about three years ago and the sequel is going to be released in about a month and I’ve already started on the rough draft for the third book.”

Sodman’s second book will hit the shelves in November. Further information on his first book- it can be found on goodreads.

Madison Loney, originally from Commerce Township, is a junior at Michigan State University in the School of Journalism with a concentration in media relations. She has interned at the Spinal Column Media Group as a local writer. You can also read Madison's posts on Spoon University, an online college student ran blog all over the world.