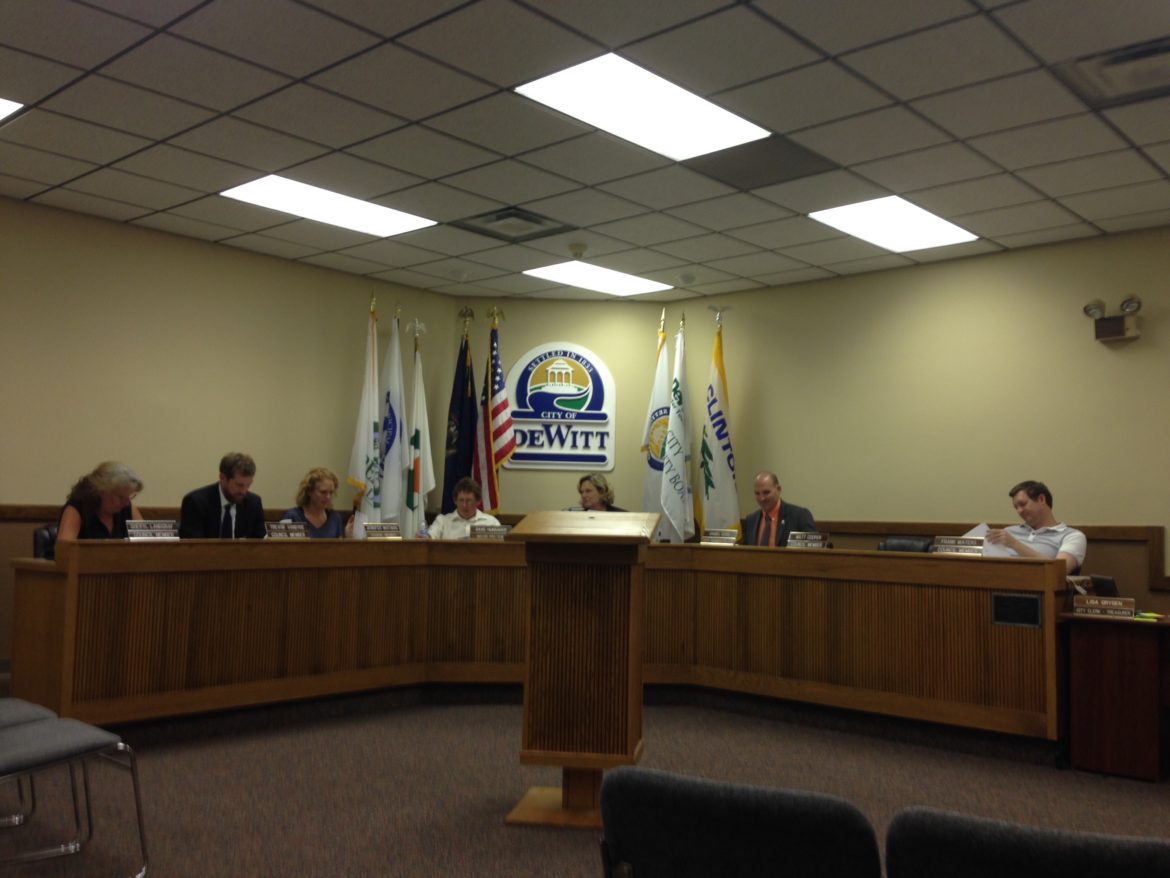 The DeWitt City Council presides over a meeting. Photo by Riley Murdock.

If there is a vacancy in an elected position, the DeWitt City Charter requires it to be filled within 30 days. DeWitt City Council has needed to fill a vacancy more than a few times since the early 2000s.

Six out of the seven current members of DeWitt City Council originally got there via appointment, including Mayor Sue Leeming and Mayor Pro Tem Dave Hunsaker.

However, this is not a hindrance or a sign of turnover issues, but instead an opportunity to ensure council has a variety of experience and get lower-level city employees to take the next step, Leeming said.

“Since I was appointed to council 14 years ago, there seems to have been a pattern for about the last 14-16 years of vacancies on council being filled with appointments and then the people who were appointed to fill those vacancies running for office and being elected,” Hunsaker said.

Hunsaker, the second-most tenured member of council, has served since being appointed in 2004. He said the current number of people on council who were initially appointed is not out of the ordinary. Leeming, the most-tenured, said the situation is more or less the same as other cities.

When members leave council, it’s often because of personal or family issues, conflicts of interest, job relocation or similar factors, Hunsaker said. Leeming herself got her start by replacing a member who resigned because of health reasons, moving up from the Planning Commission to council.

“People leave council for various reasons, I don’t think anybody’s left council because they ever disagreed with what we’re doing or they felt like they needed to,” Leeming said.

Hunsaker said interested candidates apply to the mayor, who then conducts an interview process and decides who to appoint. Council then votes on whether to approve the appointment.

Because this process often ends with appointments coming from within the city government, Hunsaker said the frequency of appointments has not been a hindrance. Hunsaker cited Council Members Matthew Cooper and Jennifer Whitman, both business owners with strong ties to the community, as well as Leeming herself as examples of appointments that brought a variety of expertise to council.

“We can sort of groom people and see how they interact with others and whether or not they’re committed to serving the city when they serve on other boards, and then we can move them up to city council by appointment, and then they have to run after that,” Leeming said.

Many are hesitant to run for DeWitt City Council because of its nonpartisan nature, Hunsaker said, which leads to another advantage of appointments: competent candidates get an opportunity to serve, and appointees are required to run for reelection.

“When you take party politics out of government, I think it becomes an activity for people that are actually truly interested and have a passion for being involved in our community and being a part of positive solutions to problems,” Hunsaker said.

The advantage of appointments bringing different perspectives is illustrated by the construction of the DeWitt Dog Park, Leeming said. While Leeming and Hunsaker had reservations about liability, two younger council members affirmed that creating the park would be a huge positive for the city. Having convinced her, Leeming said the park is now a favorite of many.

“Those diverse opinions and diverse types of backgrounds… they help us serve our community better,” Leeming said.

“I think the whole group, I’ve been fortunate enough that all of them have been good members to work with,” Coss said.