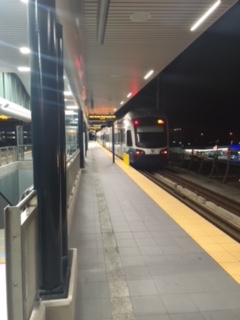 The Angle Lake light rail station, currently the Southern terminus of the King County light rail. The recently passed ST3 bill will eventually extend the line into Pierce County to the South and Snohomish County to the North. Photo by Chase Michaelson.

OLYMPIA, Wash. — The ST3 sticker shock effect is real, and it is causing major upheaval in the Washington State House and Senate.

Last November, the Sound Transit 3 Bill was passed by a narrow margin of approximately 55-45 percent, which approved the public funding of a massive extension of the public light rail system, costing the taxpayers of King, Snohomish, and Pierce counties around $54 billion over the course of the next 25 years.

This extension has been approved because it will improve convenience of travel, help with Seattle’s historically bad traffic, and address environmental concerns.

This $54 billion is being covered by higher property and sales taxes, but what has led to controversy (and multiple bills being looked at in Olympia) is the exorbitant car tab fees.

“I had heard that the tabs were going to go up, but my tabs went from I think about $50 to almost $200,” says Sue Owen, 58, of Burien. “I voted for the bill, but I don’t really think it was made clear just how big the difference was going to be.”

There is agreement between the House and Senate that something must be done to help taxpayers in counties that are already rapidly becoming some of the most expensive in the country, due to wage increases and a skyrocketing real estate market. The degree of reform necessary is the sticking point. The Angle Lake light rail station, currently the Southern terminus of the King County light rail. The recently passed ST3 bill will eventually extend the line into Pierce County to the South and Snohomish County to the North. Photo by Chase Michaelson.

House Bill 2201, which has been approved in the Democratic House but not the Republican Senate, seeks to return about $780 million to the taxpayers of King, Snohomish, and Pierce counties through an adjustment to the formula used by Sound Transit to calculate the value of vehicles. The credit would be paid retroactively to the taxpayers after the formula is fully devised.

Advocates for this bill, including State Sen. Mike Pellicciotti, D-Federal Way, point out that this would help offset the tremendous uptick in costs, but would still allow the ST3 bill to essentially run on-schedule as it has been previously voted upon. They say that anything more would be going against the will of the people that already voted in favor of ST3 last November.

“It’s definitely a significant increase in my tabs, but I think the overall purpose is a good one,” says Ratany Sieng, 23, of Auburn. “The bill that helps out without totally killing the light rail bill in the first place seems sensible to me,” she says.

One potentially overlooked aspect of the ST3 bill and the taxes that are covering it are the environmental effects. “The tab increase is to try to keep the number of cars off the road,” says Sieng. “I think that that is a good thing- considering how harmful cars are to the environment, the more people that are using the light rail instead of driving, the better.”

However, the Senate Bill 5893 seeks a more drastic solution: mandating that car tab fees be no more than five-tenths of 1 percent of a vehicle, which would seriously slash funding and likely cause the ST3 infrastructure to be significantly delayed.

“I grew up with the light rail, but it seemed to me to cover what it needed to cover: the areas that are expensive and difficult to park in,” says Kelli Ronish, 19, of Des Moines. “I don’t really know why taxpayers had to fund the light rail going to places that are easier to drive to anyway. Downtown Seattle is really the only place you can’t go by car.”

The battle over how best to solve the issue of the huge car tabs is being viewed as an early referendum of the bill: while King and Snohomish counties passed it, Pierce County voted against it, but has still been mandated to pay the increased fees because the service will reach it.

“I never voted for the light rail in the first place, and neither did most people in Pierce County,” says Ricardo Correa, 31, of Tacoma. When asked if Senate Bill 5893 amounts to a repeal of the ST3 bill, Correa said “if that’s what it is, that’s what it is. I don’t think that we need the light rail in Pierce County. The distance between here and Seattle is part of what we like about living here. I don’t want it to be easily connected if it’s going to cost us millions of dollars.”

Neither of these bills have gone into effect, mostly because they are directly competing with one another. Many Democratic Representatives feel that the Senate bill essentially is undoing the volition of the people, who voted for the ST3 bill in the first place, while House Republicans believe that the Senate bill simply does not do enough to relieve struggling taxpayers, particularly in Pierce County.