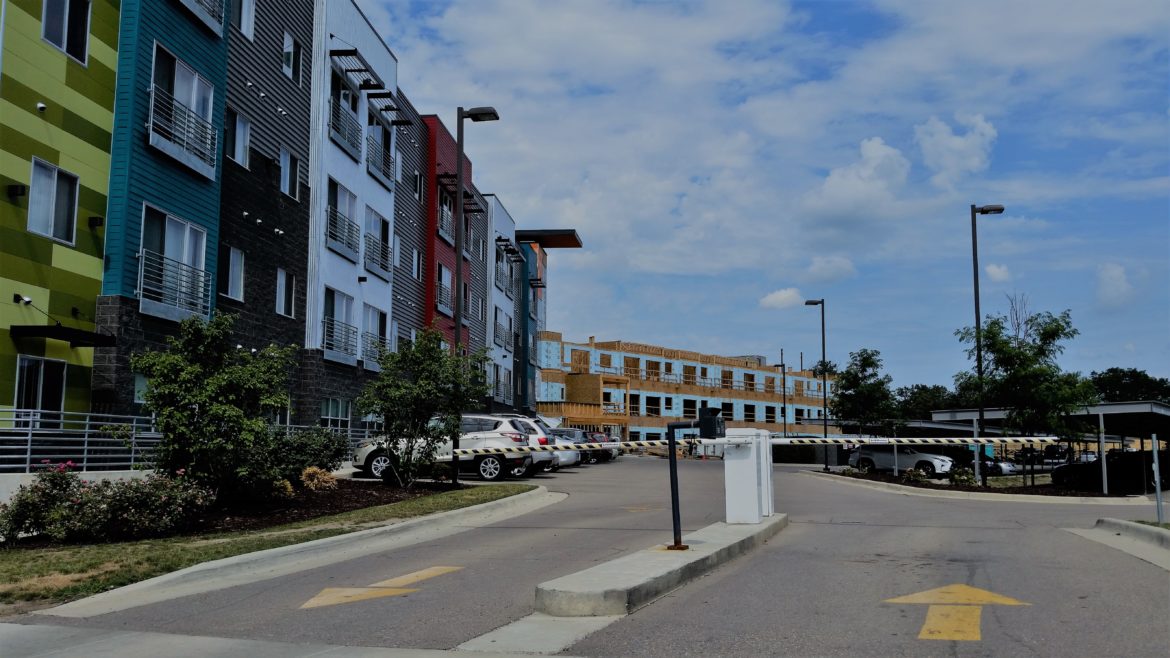 Development continues on a new apartment complex in the Stadium District.

Every city has its stakeholders – men, women and children who want to see the community grow, businesses thrive, education improve and popularity skyrocket. The collective viewpoint of these individuals in the City of Lansing could determine the future of Michigan’s capital city.

Ariniko O’Meara is no stranger to the Lansing area. She spends much of her time in REO Town, a Lansing district in the middle of an impressive comeback.

“I was born and raised in Lansing until I was 22,” she said. “Then we moved out of town with my family to Richmond, Virginia. We came back and raised our two oldest kids for about six years. Then, when they were ready to go into high school, we decided to move out of district to seek a better high school experience for our oldest son. Even then, I was still involved in Lansing because I volunteered there.”

O’Meara has plenty of positive things to say about her experience in the City of Lansing.

When it comes to improving the area, O’Meara believes the answer lies in perception.

“The whole district needs a better perspective,” she said. “Like people knowing how great Lansing is and not just hearing rumors and deciding it’s bad. You get this perception that it’s bad and immediately don’t want to give it a try. We need people to come in and see all the amazing things going on and realize that Lansing is really great.”

O’Meara even has some ideas for improvement, most of them requiring expansion of marketing efforts.

“I would say market outside of Lansing,” O’Meara said. “We’ve really brought in East Lansing and MSU areas. But we could expand beyond the borders of Lansing, making it a greater Lansing function and not just about Lansing itself.”

Dylan Rogers – Owner of The Robin Theatre in REO Town

Another individual closely associated with REO Town, Dylan Rogers, has years of experience in the City of Lansing.

“I was born here,” he said. “I lived here through middle school, so my childhood was really here in Lansing. I moved around a little bit after that. I’ve been back in the area since 2005. I went to MSU and I stuck around.”

Rogers claims something about Lansing draws him in.

“There’s something alluring here that I love,” he said. “My overall experience has been great. I think, in any place you live or any city, people make it great. You can have all kinds of wonderful amenities and natural habitats and places to explore, but Lansing is a social place and I have met so many inspiring, wonderful people in the time that I’ve been here.”

Still, Rogers believes there are several aspects of the Lansing infrastructure that could be improved.

“I want better mental health services,” he said. “It would be great if there wasn’t so much poverty and drug use. It would be great if Lansing didn’t feel so segregated. It’s a pretty diverse city and there are pockets where there’s more cultural and demographic blending and I really love that, but in a lot of places, Lansing feels very segregated.”

The number one change Rogers would like to see revolves around community involvement.

“I would love to see more people getting involved in their communities,” he said. “Whether that’s volunteering, going out and about, or taking advantage a little more. From my perspective as an event planner and performer and venue owner, we’re always trying to figure out how to get people out because it can be tough around here.” The Robin Theatre in REO Town.

According to Ross, her experience in Lansing has been satisfactory.

“I guess I would say that, overall, I’m happy with the support the community shows us,” she said. “When I was younger, I’d hoped there was more nightlife and stuff to do in downtown Lansing, but I feel like that’s an issue that’s being addressed.”

Ross does have concerns, however, about property development.

“I’d like to see a better use of land,” she said. “There’s a number of closed down buildings, there’s a number of vacant golf courses, yet there are still new builds going on. I get frustrated by that because they’re tearing down nice, green spaces to put up new builds. I wish there was some way to encourage people to make use of space that isn’t already being used.”

Kevin Vandenboss – Commercial Realtor in the City of Lansing

Kevin Vandenboss has been in the Lansing area since 2004. In his opinion, the city has some work to do when it comes to keeping its word.

“There are some things I always felt were falling short of other cities that have so much growth and vibrancy, like Kalamazoo and Grand Rapids and even Detroit,” Vandenboss said. “There’s a lot of new things and new energy. And, in Lansing, there’s been a lot of promises of that.”

According to Vandenboss, these promises are often forgotten.

“I want to see fulfillment with the promises that everyone has made with new developments and changes,” Vandenboss said. “When you think back to six years ago, there was hype about a casino downtown and, whether or not you think that’s a good thing, it would have been a step in the right direction for the city. And then you just kinda stopped hearing about it. We have all these things that are promised, but they don’t seem to get fulfilled.” Development continues on a new apartment complex in the Stadium District.

Dr. Rubén Martinez has noticed ongoing issues in the City of Lansing for years.

“There’s been a lot of out-migration over the past few decades,” he said. “The school district has lost a considerable amount of students and has to make adjustments in terms of facilities and what schools are going to stay open in order to be the right size for the students available. I think what we have is a minority majority school district, which speaks to the population shifts that have taken place.”

In addition to the education system, Martinez has concerns about income inequality.

“I think we still have a challenge with regard to wage levels,” he said. “One of the critical features of our historical moment is that wages for workers have remained relatively flat. We’ve seen income inequality across the nation and that spills into local areas.”

“From what I can tell, the local economy is bouncing back,” he said. “I think the retention of the General Motors plant was critical and I think we’re seeing some in-migration by company headquarters.”

Martinez believes business owners, students and residents in the City of Lansing are right to be concerned.

“I think one of the things that would be very beneficial is for there to occur a series of community forums where citizens become more aware of the obstacles they’re facing in terms of policy, in terms of politics and in terms of economic changes. I think often people are responding to these changes without having a deep enough understanding of the issues they’re confronting,” he said.

Martinez would like to see a more informed citizenry.

“I think we live in a period with an incredible amount of propaganda with the internet and social media and so forth,” he said. “People have a difficult time finding their way to what it really accurate. Community forums where community leaders supply some objective data on what’s going on will help people understand the historical moment in which they’re living and the things they’re up against in envisioning a better community.”