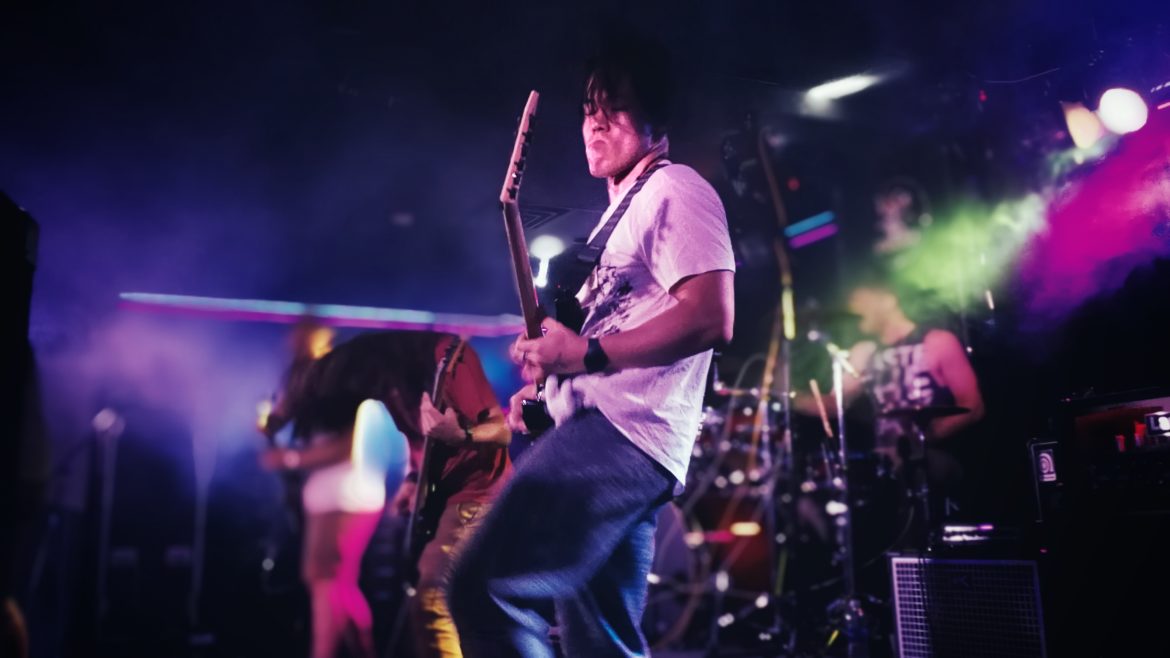 The history of metal music can be traced back to England, when economic growth became slower and unemployment started rising after World War II.

Black Sabbath, the first major heavy metal band, formed and expressed the feelings of desolation. Then the metal music spread all over the world.

Today in Lansing, the metal music bands, or underground music society, has a foundation of the audiences in these years, but still facing a lot of difficulties.

“It’s not easy, being any musician, especially in a metal band, is very difficult,” said Alfonso Civile, the booking agent at the Loft, a venue dedicated to live, original touring music in Lansing. “Because people don’t care as much as listen to something new and unique than they do with something they are familiar with.” Shen Li, a Chinese international student, who just graduated from Michigan State University, came to the U.S. 4 years ago. He started a metal band with his roommate Zhexuan Li in his freshman year by finding other members from the Craigslist. “Metal music is one of the reasons I came to the U.S.,” said Li. “I had a band when I was in high school, but it was hard to find someone who likes this kind of music from where I came from. The western countries are in the lead position of the metal music society.”

With the dream of playing what Li always wanted, the band Of Ashes founded four years ago; their experience is a microcosm the way Lansing underground music society is today. The group of the audiences is not huge, but they have a lovely community.

“Most of our fans start from other bands’ fans,” said Of Ashes’ Vocal Bass Ian Duffey. “We are trying to play in different shows, in the meantime, a lot of bands could share fans because this is the type of music they like. Some people come to our shows, they don’t even like metal music, but they enjoyed it.” Ian Duffey from Of Ashes performs in Jackson, Michigan on July 18.

Compared to other cities in Michigan, Lansing has the biggest metal music society; it has grown in these years.

“In Kalamazoo, when we were playing, it was a lot harder to get out into the actual underground scene,” said Of Ashes’ drummer Alan Boike, who used to play music in Kalamazoo. “The stuff here in Lansing is legit and publicized on social media, relative to Kalamazoo.

“Here in Lansing, there is more money involved, and we are in touch with more professional people.”

In today’s world, where the internet takes over a significant portion of people’s life, it’s a good but also a bad thing for these underground music groups. Some of the bands can go further out, but at the same time, the amount of similar kind of music groups have made the audiences much pickier than the old days.

Also, some band members think the well-used of social media and such plays a prominent role in how successful a band is as well. Julian Carrera from Of Ashes performs in Jackson, Michigan on July 18.

“That’s how it works in these days, you really can’t have a successful band if you don’t have an online presence,” said Kevin Calderon, a member of Life Lost, another metal band from Lansing. “All it matters is for people to see the band; it doesn’t even matter if the music is good or not. It’s like if you have a big online presence, you are more successful.”

A lot of artists have made a lot of complaints about the way Facebook promote events, for example, a public page needs to pay to reach out all of their followers.

“It’s tough to get people that into you, you have to be special or have an excellent marketing team,” said Civile. “If I have 8,000 followers, when I don’t pay for the advertisement, maybe only 500 people will see my posts when I pay, 6,000, or maybe all of 8,000 people will see the posts.” Alfonso Civile is pictured with his guitar in his house on Aug.7, 2017.

Rather than the social media, the stereotype of individuals who play metal music makes their life even harder.

“Some people think the underground music people are always moody and pissed off, like a horror movie all the time,” said Civile. “I believe the image was from the ’80s or the ’70s; the reality now is that a lot of members of metal music are not like that at all. They could be n suits, ties, work in a big company and you would never know they love metal if you don’t go with them.”

For artists, a regular working place is not really for them because they always want to create something, they would feel caged by sitting in front of a computer all day long, it’s harder for a lot of them to commit to a regular life. But not every one of them could be successful or be able to do what they want to do.

“There are tons of musicians here,” said Civile. “I just don’t think a lot of people in metal scenes do a lot further the way with a lot other bands do because of the fear. They don’t want to fail, or not accomplish what they want to achieve. It’s some anxiety for a lot of the artists.”

Playing music can be a release for some of the band members, it’s part of the break between their daily life and means different things to different people.

“Honestly, this is my release,” said Duffey. “If I don’t have it, I probably gonna go insane, you think all I’m doing is making noise, but the thing I write done, that is therapy to me, if I don’t have this, I will go insane.”

The biggest metal music societies in the U.S. are big cities like New York, California, etc. Lansing, as a small community, musicians from the underground music society are trying, and there still is a lot potential in the future.

“I think there is a long way to go for them (the metal music bands) in Lansing,” said Li. “It’s not easy to be successful; more patients would help a lot. But anyway, if I were never in this group, my dream would have never come true.”