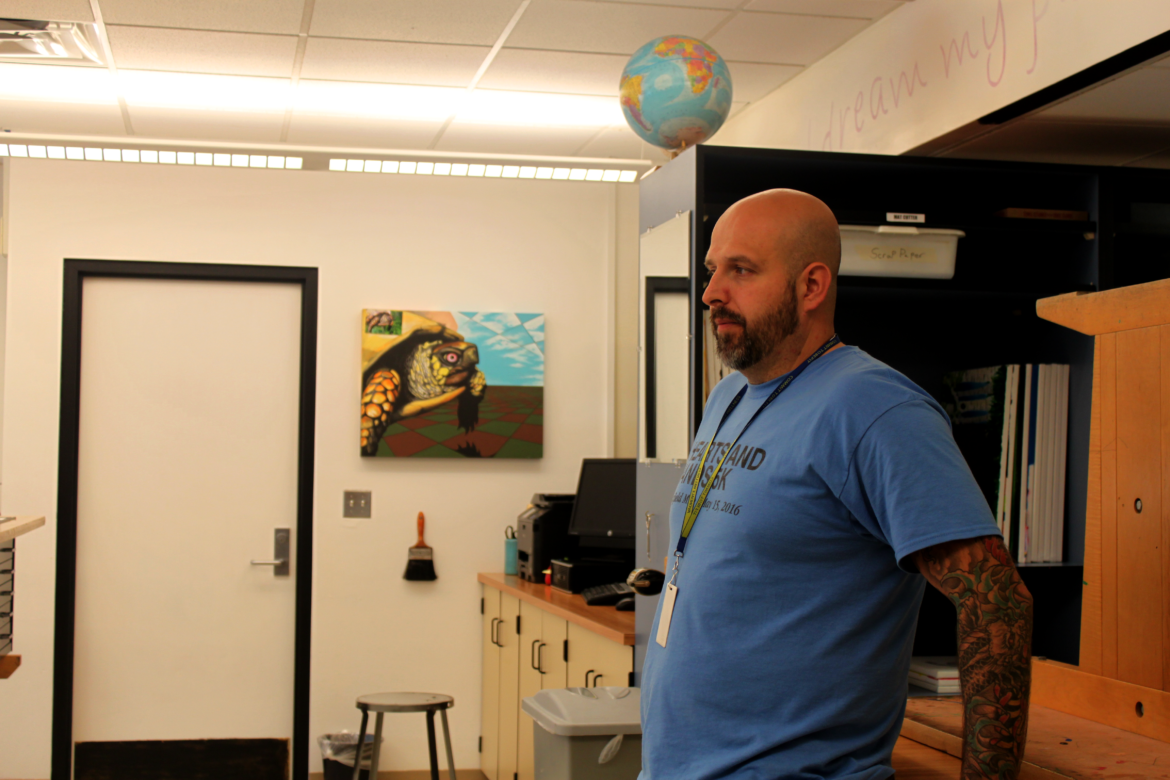 AUBURN HILLS, Mich. — A suburban Detroit alternative school is pushing boundaries and blowing the doors off of traditional ideas regarding alternative education, according to its principal, Taylor Chapman.

The Avondale Academy has been considered the black sheep of the district, known as the “dumping ground” for Auburn Hills’ main public high school, Avondale High School.

Over the years, Chapman and other staff members have worked hard to polish and refine the institution, making it a desirable learning environment for students and families alike.

Recently, the Academy has implemented many changes in hopes of better serving their student population. The school week has been shortened to four days a week, with Fridays being strictly for leadership and skill building activities.

Many classes are offered online and remotely and the school is working towards a trimester system which allows for students to accomplish more credit hours in less time.

“I’ve seen the best of times and the worst of times and everything in between,” said Chapman, who has been with the Avondale Academy throughout many dips over the years.

Chapman has spent the last 12 years working at the Avondale Academy in Auburn Hills, where he began as a teacher. In 2013, Chapman became the principal.

Today, he feels that the school is moving in a positive direction with an average student body of around 160. Motivational mantras present throughout classrooms and hallways in the school.

The majority of Avondale Academy students come from Pontiac through the school of choice program, which allows students outside of the district to enroll in selected Oakland County schools.

Jordan Taylor, a 2017 graduate of the Academy was one of those students. Prior to beginning her education at the Academy, Taylor attended Pontiac High School for a year.

Pontiac High School had slightly lower test scores and a slightly higher student to teacher ratio than the Academy. Its location in suburban Auburn Hills and more focused and flexible approach also made it a desirable destination for some Pontiac families.

Taylor had a positive first impression of the Academy after touring the school with her mother.

“The principal seemed a little eccentric and was always laughing which I thought was nice,” joked Taylor. “The teachers were inviting and open and it was a much smaller school than Pontiac High so you could actually get to know the teachers and interact more than you would in a normal high school.”

The small size of the Academy is something that Chapman also considered to be a benefit. He felt that it added a sense of community and togetherness as well as an opportunity for more focused interactions with students who need it. A mural designed and executed by Avondale Academy students, with staff assistance.

“I want to be in and out of classrooms having conversations and developing relationships with students,” explained Chapman. “With this population of students, 90 percent of who they are comes down to the lack of those meaningful relationships in their lives.”

Chapman works to cultivate meaningful relationships between students and staff alike. He also attributes the growing graduation and retention rates to the development of those relationships.

“If kids know you care, they’re going to care. If kids know that you don’t care and that you’re there for a paycheck, they’re not going to buy into that system,” said Chapman. “I think we’ve secured some staff and programs that really show that.”

Chapman and his fellow staff members stress the importance of receiving a diploma and receiving a college degree to their students in many ways.

One example is the Academy’s collaboration with the Michigan College Access Network (MCAN). MCAN is a coalition that provides support and resources to promote a college-going culture within Michigan communities.

Taylor has taken advantage of these resources provided by the Academy.

“I am participating in a dual enrollment program called ACE where I would spend half of the day at the high school and the other half at a college,” explained Taylor.

“I like it because it gives me bigger input into my future so I can get into college-mode earlier and after I finish the program, I will already have 62 college credits under my belt.” Stickers from various the universities that Avondale Academy students aspire to attend, displayed in Chapman’s office.

Today, the Academy is located in Avondale’s old elementary school building, Meadows. The Academy’s previous location was leveled and the school was moved into the elementary school which is much better equipped to serve students but also much farther from Avondale High School.

When entering the building, you notice that it looks like a normal public school. There are lockers, classrooms, a gym, a cafeteria and even a thriving community garden that the students maintain. It appears to be a healthy learning environment. However, according to Victoria Powell, this was not always the case.

Powell, who eventually graduated from Avondale High School, spent time at the previous Avondale Academy location in 2007 after being presented with an ultimatum which she felt cornered her into attending the alternative school. Main corridor of the Avondale Academy

According to Powell the Academy offered no electives, clubs, extra-curricular activities or sports to her during her semester there. That was especially difficult for Powell, an exceptional basketball player who was a member of Avondale High School’s team before being sent to the academy.

When it came to field trips, there was only one. Avondale Academy staff took students to the Oakland County Jail for their own rendition of “Beyond Scared Straight” which Powell says was mandatory.

“You would come to school, go to your first two classes, then lunch and two more classes that were online, and leave,” said Powell. “There were no other activities. No spirit week, sports, nothing.”

Powell felt that many of the previous staff members at the Academy had given up on the students during her time there. However, she remembered Taylor Chapman and described him as being “one of the nice ones.”

The Avondale Academy that Powell describes was from 10 years ago. Chapman remembered this period of time and described it as having been “tumultuous.”

“There were a lot of teachers coming and going through those years and we were being pulled in a variety of different directions,” said Chapman.

“During that time that we jumped from 40 students to 220 students, we were taking any kid under the sun,” he explained. “There were good apples and bad apples and with that came a lot of great things and a lot of challenges.”

Today, Chapman is working hard to integrate extra-curricular activities, field trips, educational opportunities and sports into the Academy experience. He wants the Academy to be a place students want to be rather than being forced to attend.

“[The Avondale Academy] is a completely different program than it was back then. From the staff to students to graduation rates and test scores,” he explained. “There’s been a drastic overhaul.” Words of inspiration offered by students that were displayed in an English classroom at the Academy.

However, despite the changing face of the Academy, students who attend the school still face an ugly stigma in the community.

Recent Avondale Academy graduate Jordan Taylor deals with this stigma and partially attributes it to the lack of collaboration between Avondale High School and the Academy.

“I think we have this stigma placed on us and that’s why [Avondale High School] cut off connections with us,” said Taylor. “I feel like the high school and the district didn’t think it would be best to interact with us but over the past few years I think they’ve realized that we are just regular students, too.”

Powell also recalls the negative stereotypes associated with the Academy.

“When the average person thinks of the academy, it scares them. It wasn’t a place people were sent to learn more,” she said.

One visible divide was the policy against Academy students playing sports. For many years, students were banned from joining any Avondale High School sports team and since the Academy did not have its own teams, students were deprived of the opportunity to play sports.

This year, Chapman has challenged that long-standing rule.

“When I began teaching at the Academy, students were allowed to play for the sports teams,” explained Chapman. “But then someone flipped a switch and it was no longer allowed for around eight or nine years. Pushing back and getting that changed last year took a lot of time.” The Avondale Academy’s gymnasium. This space is sometimes shared with an Adult Education and Special Education program that are both housed in the same building as the Academy.

In a national study conducted by Child Trends, high school students who participate in athletics are more likely to experience an increase in parental support and decreased depression and anxiety.

Participation in sports was also associated with higher levels of self-esteem and motivation as well as a lower likelihood of juvenile arrests and teen births.

Chapman feels hopeful about the future of the Avondale Academy. He has made efforts to increase the visibility of his students in the community through volunteer activities serving veterans, the elderly and underprivileged children.

“People are always going to have their perception of what alternative education is,” said Chapman. “The only way to change that is to show them otherwise.”