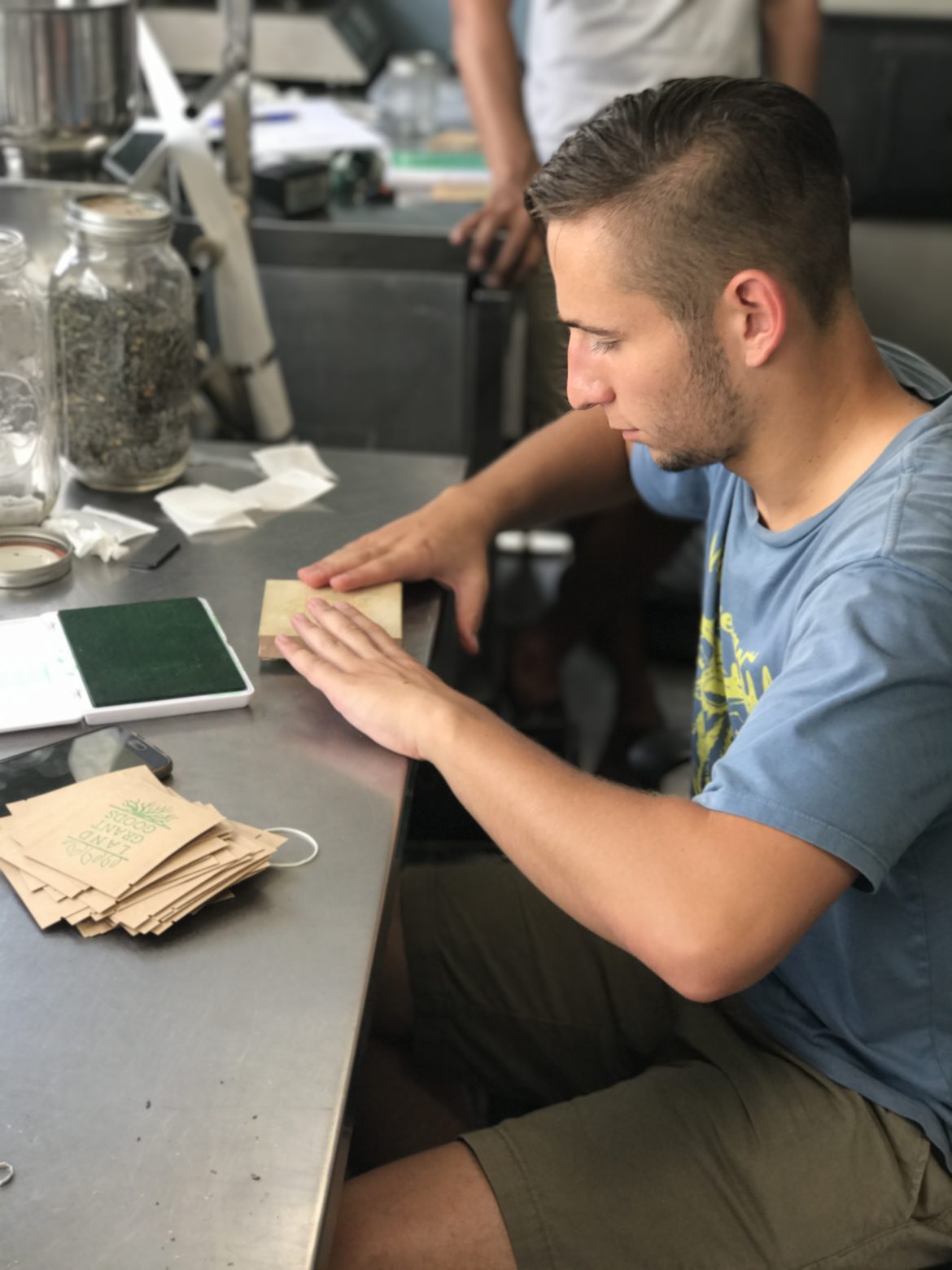 The student-run company began as a club in 2014 until Marx took it under his wing in January 2017 as a student company affiliated in partnership with MSU.

As Marx begins his day which includes the inventory of the day’s products — tea bags ready for sale — he journeys to the student organic farm where he finds his small team already hard at work, blending lemon grass, packaging products and finishing off tea products with the Land Grant stamp of approval.

Marx’s company’s goal is to create quality products for East Lansing consumers in hopes of one day earning enough funds to invest profits for the company back into environmental initiatives at MSU, which includes partnerships with the Bailey Greenhouse and Urban Farm, Residential Initiative on the Study of the Environment and MSU Culinary Services.

But for now, the small company makes enough to cover labor and general business cost. Alex Marx drawing out plans for the day in the Land Grant Foods office located in Bailey Hall at MSU.

“Organic food is expensive, you can’t use certain products that you can for other products, it takes longer to grow, it means you have to provide extra care to products, that increase labor cost and ultimately makes the products more expensive,” said Marx. “We rely a lot on volunteers to help us keep cost down, we have a great community of support in that regard.”

“I typically help out once or twice a week with the production, labeling products, do my part, organic farming and student entrepreneurship is important work,” said Michal Babinski, a Product Development Intern for Land Grant Goods.

The struggle for organic farmers and students that want to eat organic foods is not unique to Land Grant Goods. According to Consumer Reports, organic food on average is about 47 percent more expensive than its non-organic equal, but that does not necessarily mean that cheaper is always better.

According to a report from the Environmental Health Perspectives, in order to minimize your exposure to certain toxic chemicals in the environment and exposure from pesticides it is better to consume as much organic food as possible. But knowing this truth about organic products is not always enough, some people have to consider the financial strains of buying organic food. “I eat like crap and I don’t like it but because money is a barrier I sometimes have no choice,” said MSU senior Cassie Perry. “I would love to be able to buy organic food but why pay three dollars for a loaf of bread I can get for one dollar, is it really worth it?”

While organic food is expensive, some companies have been making great strides to try and change this, Aldi, an international grocery store chain, recently announced its plans to go completely organic by the end of the year, a move that creates the biggest competitor to the Whole Foods grocery store that has dominated the organic food market up until now.

In addition to this, Amazon recently got into the grocery business as well, launching a chain of grocery store across the United States and in parts of Europe as well under the title, “Amazon Fresh.”

“I surely think that as time goes on we will see organic food become less expensive and we are doing our part and providing students with an opportunity to learn about the business and hopefully use it in the future to make organic farming an even bigger market than it currently is which will hopefully lead to cost becoming cheaper as more companies begin to invest in its growth,” Marx said.

It is 5:00 p.m. at the little trailer where these students work, Marx and his team load up the day’s inventory, they’ll be back tomorrow another day of unpredictability for the team as they do their part in providing organic products to consumers.

A senior journalism student at Michigan State University with a concentration in environmental reporting. Jalen is a reporter for the Spartan Newsroom website. His previous journalism credits include VOICE Magazine, The Black Sheep and as an contributing author to the Bias Busters book series for the Michigan State University School of Journalism.