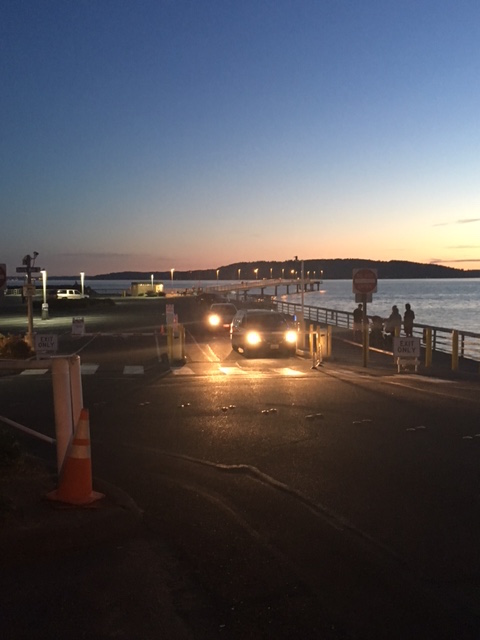 A line of cars form to pay for their time at the Des Moines Marina and Beach Park. Photo by Chase Michaelson.

DES MOINES, Wash. — The Des Moines Marina and Beach Park has long been a natural beauty and hangout spot for kids, teenagers, and adults alike in a town that is otherwise lacking in both. For the first 25 years of its existence, the Beach Park had free entry. As of last month, that is no more.

In June, the City Council instituted a paid parking system for the marina, both to help offset the cost of maintaining the marina and also help keep the environment clean and safe. Parking is $1 per hour, $5 for a whole day, and Des Moines residents can purchase annual passes for $90. Reactions have been mixed.

“I thought it was kind of ridiculous,” says Brooke Irish, 18, a part-time resident of Des Moines. “People go to the marina to hang out and walk the trails, and to me, you shouldn’t have to pay for that.” A line of cars form to pay for their time at the Des Moines Marina and Beach Park. Photo by Chase Michaelson.

The State Department of Natural Resources charges the city $120,000 annually to lease the tidelands breakwater area, and estimates of the cost to renovate the Marina bulkhead are upwards of $12 Million, so the city seems to look at it as a fundraising issue. About 70 percent of visitors to the marina are not Des Moines residents, and therefore pay no taxes to maintain it, according to the city.

“Other fundraising efforts were not sufficient,” said Rick Scott, recreation coordinator for the city, in an e-mail. “This will help us raise the money to maintain the marina.”

The other element to the change is that the marina had become a hotbed of illegal activity, particularly marijuana use. Although recreational marijuana is legal in Washington, it is not legal to smoke in a public area like the marina. City officials hope to curtail this, and because you can no longer park, it is much harder to enter the park after it closes at 10:00 pm. The newly-installed parking meter at the Des Moines Marina and Beach Park. Photo by Chase Michaelson.

“This has and hopefully will continue to keep late night noise down, which was a real issue for people who lived near the marina,” says Scott. “Those people had expressed frustration with the environment after hours.”

One such resident is Gio Flores, 34. He says that while he is happy that the parking system was instituted, there have been some unintended consequences. “Because people cannot park there anymore, they have been sometimes parking in my apartment complex and walking down to avoid paying. Then, they leave their trash near my apartment instead of in the parking lot of the marina,” he said in an e-mail.

“I don’t know if it has had an effect on the environment,” says Irish. “People could park at the stores or restaurants near the marina and then walk down to smoke if they really wanted to. But I get why the city is doing it: they’re kind of broke and this will help because most adults will get the [annual] pass.” Irish, who is eligible for the pass through her mother being a full-time resident, doesn’t expect to buy one.

“Overall, I am happy that the policy was put in place,” said Flores in an e-mail. “I wanted to live by the marina because it is so beautiful, and the money will help keep it beautiful. I care much more that the marina will be here in ten or twenty years than if I have to pick up a McDonald’s wrapper every once in a while.”

“We think the parking rates are exceedingly reasonable,” says Scott. “Compared to other cities in the area like Burien and Federal Way, we have far cheaper public parking. I think people that are complaining about paying for the parking probably haven’t really been informed of the financial situation very well.”

Scott said that at this time there are no plans to regulate public parking in any of the other parks that the city provides, saying that the marina was a special case because of the high cost of maintaining it.

One thought on “Natural beauty no longer free at an Washington state marina.”