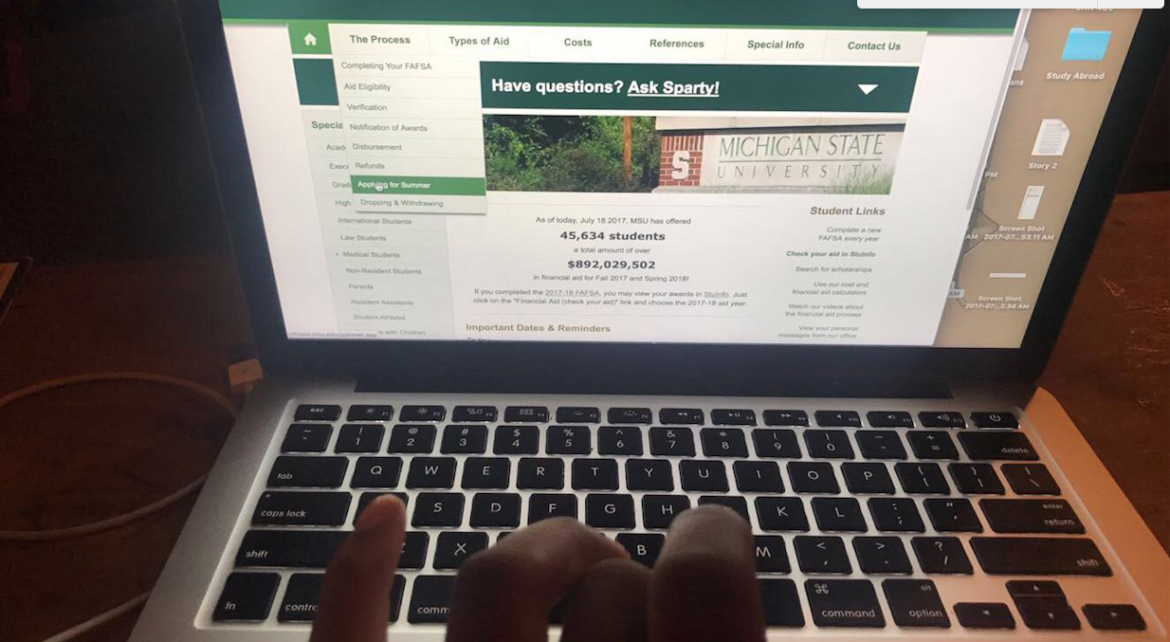 What about the summer of 2018? A question various students have had when coming up financially short when enrolling in summer courses. It is a problem education senior Shanelle Napoleon has dealt with this current summer being a full-time student at MSU.

“My experiences with FA [Financial Aid] vary! I never really know what I’m gonna get when I head to the office,” stated Napoleon. There are approximately 11 financial aid advisors available to MSU students for financial aid, according to the Office of Financial Aid website.

When asked how many students come into the financial aid office on the daily Val Meyers, MSU Office of Financial Aid Associate Director, explained that it varies.

“Depending upon the time of year.  We have had as few as 10 a day  during break weeks, when most of the students are gone, or as many as 250 a day during the start of the semester.  In 2016 we saw 16,603 students/families in the office,” said Meyers. Dividing 16,603 students/families amongst approximately 11 advisors, in the year of 2016, on average more than 1,000 students/families sit with each advisor for financial aid assistance. Would these odds possibly cause advisors to loss compassion for their many clients? That’s a question Napoleon wonders with every trip to the on-campus office.

“I always hope for the best but my outcome is ultimately determined by whichever ‘specialist’ randomly selects my name depending on how compassionate and helpful he or she may or may not be!,” said Napoleon.

As previously stated getting even half of the financial coverage summer aid has been a worry for Napoleon. She was even told by an advisor that summer aid had run out.

“I was told that I had was nearing the last of the financial aid I could receive at MSU and that I barely had enough to finish my last year,” said Napoleon.

MSU knows that not all students will attend summer, so while MSU sets aside some money for summer, the school has to estimate to a certain extent, said Meyers. If MSU needs to use more to fund students in fall and spring, they do that.

Meyers also stated loans are always available if the student has not used up their lifetime limit, but it is not always enough to pay the full cost of summer attendance.

From the Student Loan Debt Statistics for 2017, the national student loan debt is approximately over $1 trillion and the overall number of student loan borrowers are about 70 percent of college students.

“Loans are helpful to some extent. It helps me finish school now but I know it will come back to haunt me in the future,” said Napoleon.

Also stated in the report, the average debt per student borrower is $27,857. Often loans are the only option for students expressed by Meyers.

“If the family has sufficient assets and income to fund a significant portion of the student’s costs, loans will be offered but not need-based gift aid,” said Meyers.

In the school year of 2014-2015, approximately 57 percent of financial aid dollars awarded to undergraduates was in the form of grants, and 34 percent took the form of federal loans, stated from Patricia McWade, Dean of Student Financial Services, Georgetown University through Big Future College Board online help room.

If you are an MSU student or a student of any other education institution and funding is a problem of yours, Napoleon has so key advice for you.

“There are more opportunities than you are led to believe!,” said Napoleon. “Sometimes someone in financial aid will tell you ‘no’ or ‘you can’t.’ But there are things that they don’t tell us! Be persistent and don’t take no for an answer!”

Try to work and find all option available to you, whether they are outside and inside the Office of Financial aid. Be sure that you are receiving every grant and additional money that you can, said Napoleon. On the MSU Office of Financial Aid website there is a place to apply for Summer Aid eligibility.

MSU’s goal is to give students good information about their options for financing their education, to treat students in similar financial situations in a similar manner, stated by Meyers.