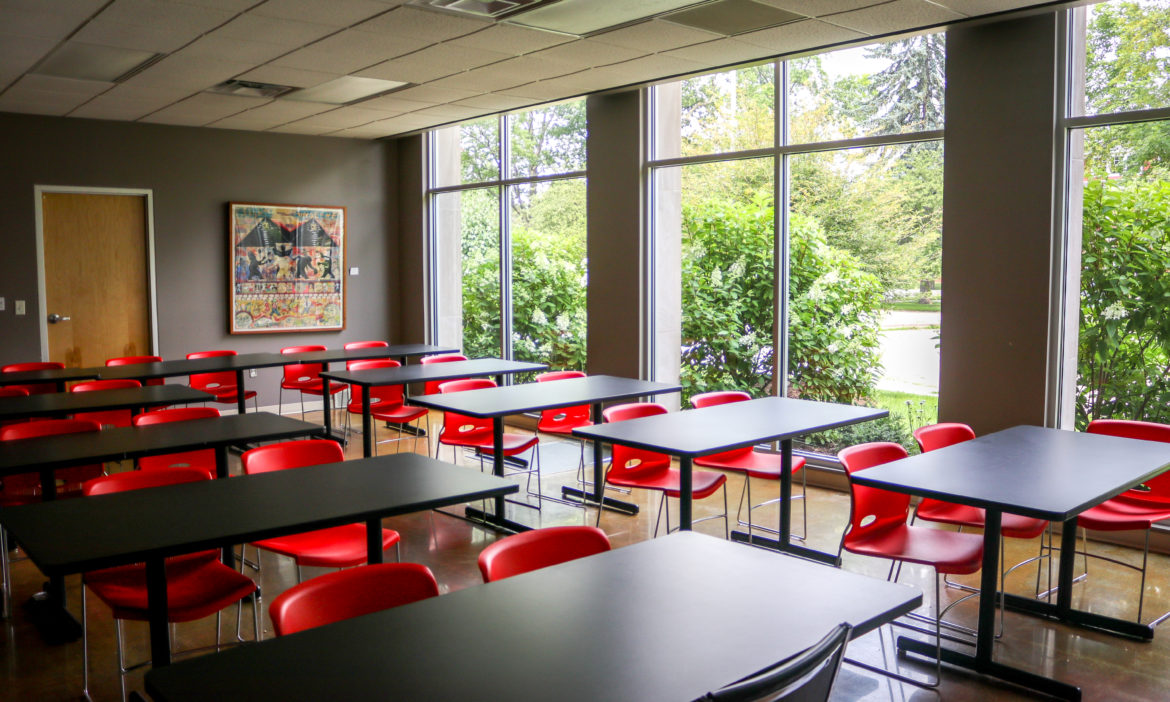 The classroom for refugees is pictured at the Lansing Refugee Development Center on July 21, 2017.

Since the beginning of 2017, there is a substantial decrease in the number of incoming refugees in Lansing.

According to St. Vincent Catholic Charities, which is the designated refugee resettlement agency in Lansing and mid-Michigan, there were 248 refugees that arrived in Lansing during the last three months of 2016, but and there are only 83 refugees arrived STVCC in the first quarter of 2017. “We had around 776 refugees last year,” said Judi Harris, the refugee resettlement director at STVCC. “We expected the same number this year until the administration made all these changes, so now we will be lucky to get 450 this year.”

This change is not only happening in Lansing but all over the United States and it appears to follow the new presidency. President Donald Trump signed an executive order with in the first 100 days of his presidency.

The order suspended the entry of refugees from seven countries that are Muslim-majority.

“Our country needs strong borders and extreme vetting, NOW. Look what is happening all over Europe and, indeed, the world – a horrible mess!” Trump posted on Twitter on Jan. 20. Lansing Mayor Virgil Bernero and other Lansing elected officials signed a “Stand Strong, Respect Michigan” pledge and claimed that Lansing is a welcoming city for immigrants and refugees. Additionally, Michigan State University claimed they would not release the immigration status of any student unless required by law.

“Work like the Refugee Development Center and many other organizations means that Lansing has the most coordinated, engaged, and active support network for refugees in the state,” said Susan Reed, the managing attorney at Michigan Immigrant Rights Center. Handicrafts are on charity sale at Lansing Refugee Development Center.

Lansing is a “free case city,” which means Lansing welcomes refugees who don’t already have a family in the United States, and organizations like STVCC and RDC put efforts to help them get through the transitioning time.

“We provide educational services, community support, some education to children and adults when they arrive in the area,” said Mariah Shafer, who works at the Refugee Development Center. “Lansing School District has 52 languages, so when the teacher comes into a class, they are facing students from Variety background, different cultures, expectations, traditions, and language. Because of this history, the teachers there have more experiences working with a diverse population.” The classroom for refugees is pictured at the Lansing Refugee Development Center on July 21, 2017.

Michigan State University is one of the places that provide classrooms for refugees, and some MSU professors volunteered to be tutors for them in the summer.

“We had been tutoring in English for the past two months,” Joyce Meier, the assistant director of MSU First-Year Writing Program posted on her Facebook. “People from Taiwan and Sudan and Somalia and Syria and Cuba and Thailand. I am in awe of their amazing energy, their spirited hard work, their warmth. Their stories inspired. How greatly I will miss them.”

According to Meier, there is a group of MSU faculties and librarians working together to bring an exhibit on some of the refugees to MSU campus in mid-October.

Even though Lansing is still a welcoming city for refugees, the new executive order has caused much concern among refugee populations, and it prevents many from entry to the nation.

“These changes provide them with concerns about themselves and their families,” said Shafer. She also claimed that even the legalized refugees here have concerns too.

“It doesn’t keep them from worrying, and it doesn’t stop them from worrying family people who are in transition to come here, who were approved, they were gone through the background checks,” Shafer said. “Every time, if there is a pause or a stop in the resettlement process, people’s documents expire, their housing certificate expires, so people are being held up and who knows how long is that going to be because they have to go back from the beginning.”

The increased number of elected anti-refugee oriented politicians, such as the majority leaders in house and senate has made refugee’s situation worse. Lansing is doing good in supporting refugees, but there still has room to grow.

The election of anti-refugee politicians as president in house and senate has made refugee’s situation worse. Lansing is doing good in supporting refugees, but there still has room to grow.

“The people are kind,” said Steven Gold, a professor of sociology at MSU. “Housing cost is low, but there are not many jobs or resources, such as multilingual training programs or refugee resettlement agencies. Lansing is less diverse in terms of nationalities than larger cities like New York or Los Angeles.”

Although recent legislation has cost much concern in the refugee population, the great support system in Lansing provides refugees a safe home and as welcoming as always.