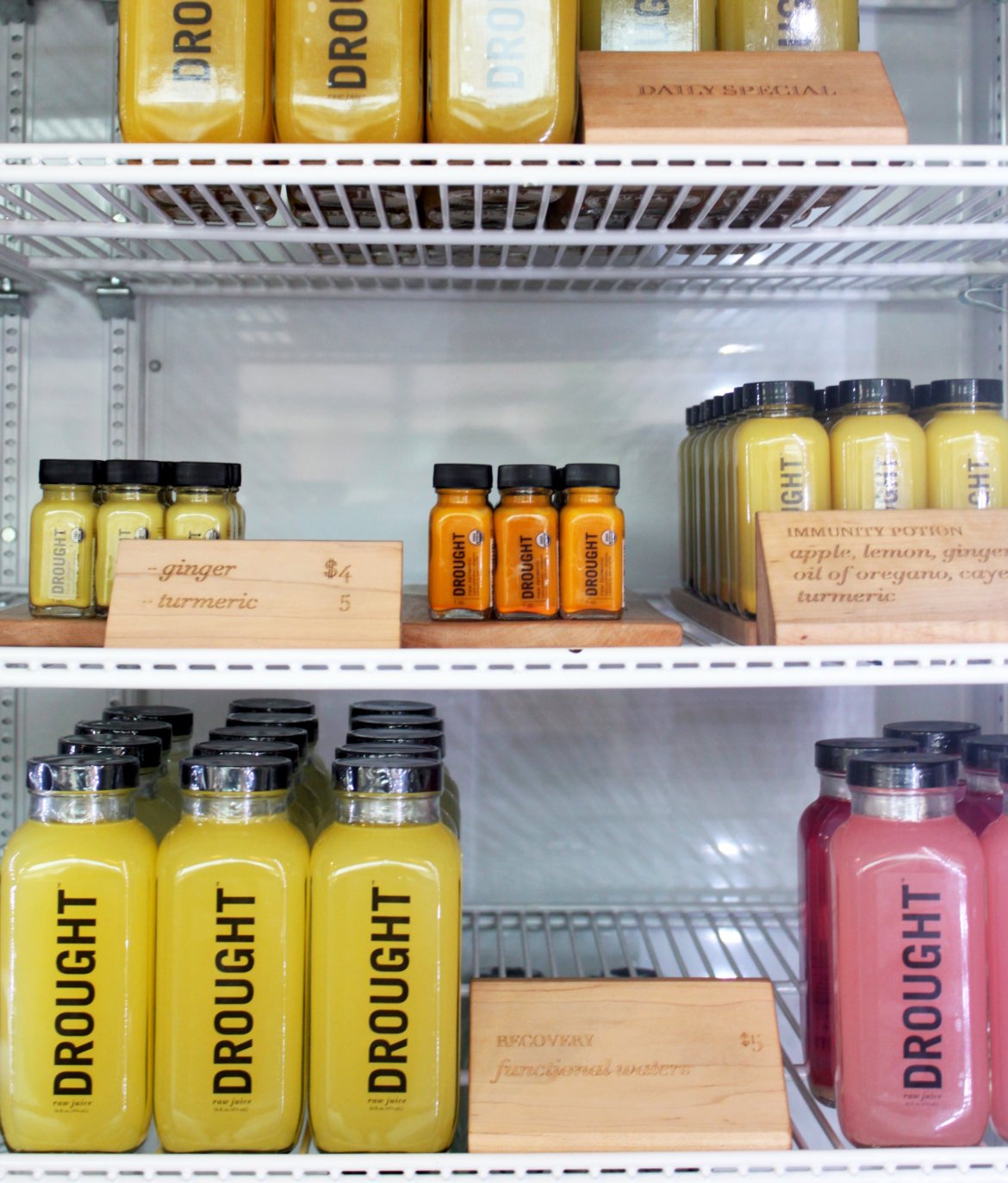 Selection of juices at Drought

DETROIT — Gen-X consumers have shown a considerable interest in healthy eating, according to a USA Today survey. Young consumers are more conscious of food ingredients, GMOs and whether or not their food is organic than their older counterparts.

As a result, fast food businesses are on the decline and alternative quick-yet-healthier options are rising, even in the Detroit area. One oldie-but-goodie trend in the health food sphere that continues to flourish is juicing.

In the past, cold-pressed juice was mostly limited to urban, trendy cities in the U.S. However, today it is a common pick-me-up for the average middle-class working man or woman due to its increasing popularity and availability.

However, there is a catch: raw juice isn’t cheap. At $11 per bottle, you can’t help but to ask yourself, is it really worth it? Couldn’t you just whip up a fruit smoothie at home and save a few bucks? Priya Sankaralingam, a retail associate at Drought Juice Bar, says it 100 percent worth the price tag.

“Our juices are raw and cold-pressed, so there are no preservatives, added water or sweeteners. It’s just raw, organic produce,” explained Sankaralingam.

The phrase “cold-pressed” has been front-and-center on labels and advertisements. Although you can safely assume cold-pressed is a good thing, many people may not actually know what the phrase means. “A cold-press is what we use to make the juices,” said Sankaralingam. “It’s the best way to keep all of the nutrients intact.” And nutrients you will get. An average 16-ounce bottle of Drought’s juice packs around three to five pounds of produce, which boasts impressive amounts of health benefits. It is also much easier to down a delicious green, red or orange concoction than it is to eat three to five pounds of whole fruits and veggies in one sitting.

It is no secret that Drought has led the juice movement locally. The business, owned by four sisters, has opened five stores in the last seven years with a new store coming to Ann Arbor, Mich. in July. Their rapid growth speaks volumes to the increasing popularity of raw juice in Metro Detroit.

Sankaralingam shared that cold-pressed juice is even being used to cure colds and avoid getting sick while traveling. “A lot of people will come in and pick up our immunity potion if they’re traveling or under the weather,” said Sankaralingam, “A woman even came in and said she got our immunity potion and convinced her friends to start drinking it instead of 5-Hour Energy.”

In addition to healthy alternatives to energy drinks, they also have Recovery Waters which are their own version of a Gatorade-like beverage.

Sankaralingam explained the benefits of all the juices which included ingredients that fight infection, improve cardiovascular health and make skin clearer and brighter. Although all of this may be true, wouldn’t a smoothie still have all of these benefits? We asked Sankaralingam about why raw juice is better and she presented a convincing point of view.

“Other than eating raw fruits and vegetables, cold-pressed juice is the best, healthiest alternative you could go to because the cold-pressed technology retains the nutrients even if you’re peeling off the skin,” she said. “When prepping food, people are peeling and washing, anyway. Through that process, nutrients are lost since not many people eat their fruits and vegetables completely raw.” Her point was well taken. Another benefit of cold-pressed juice is the sheer volume of fruits and vegetables inside of a small bottle. A smoothie of the same size would not have nearly as many nutrients.

Sankaralingam says that Drought’s goal is to promote healthy lifestyles as well as contributing to local farmers and sustainability efforts.

Trisha Roberts, a Grosse Pointe yoga instructor and energy master, agrees that cold-pressed juice is worth the price and is a more nutrition-dense option than smoothies. “Juices are great because the body doesn’t need any time to digest the liquid,” she explained. “In result, the energy from the juiced fruits and veggies go immediately into our bodies without any effort digesting, providing instant energy.”

Roberts also recognizes the cost of cold-pressed juice and prefers making it at home. But when in a hurry, she does not mind picking up a bottle from her favorite juicery. “I do think cold-pressed juice is worth the money because it keeps us healthy, boosts our immune system and often saves the time one would have to spend making their own juice.”

In regards to the cost, Goshtasb said, “I would much rather spend my money on a delicious, slightly overpriced juice than a coffee or a sugary drink without any of the good stuff in it.”

In combination with whole fruits and veggies, cold-pressed juice is a great way to stay healthy and meet our daily produce requirements. According to a Harvard Medical School study, “[juicing] is a healthy way to increase your intake of vegetables. However, it should not replace fresh, whole vegetables in the diet.” Dr. Payam Kiani, a naturopathic doctor at Kiani Naturopathic Clinic sees the benefits of both juicing and smoothies.

“The ultimate pro for juicing is that you can get a high concentration of your micronutrients, which are your vitamins and minerals that help all the enzymes in your body function so you can make use of the calories you’re eating,” explained Kiani.

However, there is a downside to juicing. “Juicing cuts out the fiber, so you have to make sure to get your fiber requirement from other foods.”

Kiani felt that different concerns are addressed by smoothies and juice. “If you’re not eating your daily requirement of fruits and vegetables, juice can count towards that. But if your goal is to have a balanced snack or meal that’s healthy, go with a smoothie because you can incorporate macronutrients like protein and fats into it.”

Overall, juicing is seen as a great way to consume vitamins and minerals, second to eating raw fruits and vetegables. However, it does not deliver a balanced meal the way that a smoothie can.