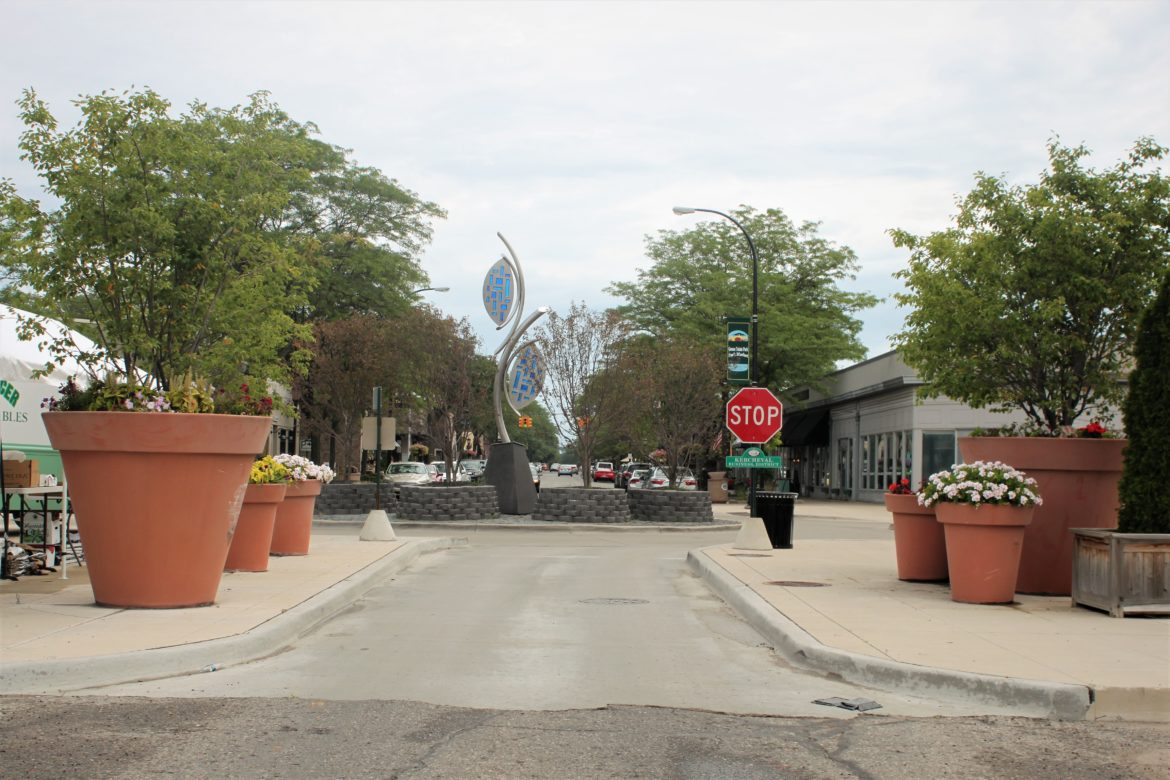 The border of Grosse Pointe Park and Detroit, at Kercheval Avenue and Alter Road.

DETROIT — Christine Matthews and Marlon Wilson have lived near the border of Grosse Pointe Park and Detroit almost their entire lives. Both in their 40s, they describe a Detroit unimaginable to many due to the recent fall of the city.

“It was very diverse in the beginning. You had a lot more togetherness,” explained Matthews.

Matthews is a 47-year-old homemaker and has lived in her childhood Detroit home since 1971, apart from a short period of time living out of state.

Wilson and Matthews are childhood friends whose homes sit side by side on a now deserted block of Alter Road.

Wilson pointed around to vacant lots, drawing figures with his fingers of where homes once stood.

“There were about three houses right there,” said Wilson. “Another two over there,” added Matthews.

More than likely, the homes turned to blight and were bulldozed. This was the fate of many homes that once decorated the streets of Detroit. Christine Matthews and Marlon Wilson standing on the patio of Wilson’s home. Wilson and Matthews have lived in the area since the early 70’s.

“Now that times have changed, a lot of people moved away and we have more crime,” said Matthews. “But at the same time being in this area and on this block … it’s not as bad as it is further into the city.”

Matthews is referring to her home’s proximity to Grosse Pointe Park. She and Wilson feel it is the reason their block has been safer than other areas in Detroit.

Grosse Pointe Park is home to 11,555 inhabitants, according to the 2010 U.S. Census. The city is one of five Grosse Pointe communities that are known for majestic architecture, manicured landscaping, exceptional schools and old money.

From Wilson’s porch, Grosse Pointe was one block away. However, once the border is crossed, an entirely different world awaits.

Wilson, a 40-year-old screen printer and clothing designer was spending the day working on his childhood home.

“There are a lot of us out here that are trying to uplift one another and our neighborhood,” explained Wilson.

Wilson created his own line of t-shirts, Marlon Micheals Clothing Designs, which pay homage to his hometown, Detroit. He and Matthews have stayed in Detroit throughout the city’s difficult moments because they believe it its potential. This was not the case for the 1,200,000 people who fled the city. Some went far north into suburbs such as Birmingham and Bloomfield Hills. Others, like Claudine Fets, relocated 6 miles away to a quiet neighborhood in Grosse Pointe Woods.

Fets was in the second grade when her family moved to Grosse Pointe Woods from Detroit.

“The turning point for us was when my sister was being bused to a high school in Detroit that just had a bad reputation…violence and all of that,” explained Fets.

Her family was motivated to leave Detroit mostly due to the quality of schools, according to Fets.

However, there were other forces at play for her family and many others who fled Detroit.

“There was the factor of race, which is the elephant in the room,” said Fets. “I’ve tried to focus on not being racial but that’s just always been there.”

While Detroit boasts a black population of 87 percent, Grosse Pointe Park weighs in at 10 percent, having risen seven percent since the year 2000, according to the U.S. Census. When asked if her social circle was predominantly white, Fets responded, “Yes, absolutely … like all white.”

Being in a racially homogenous community had its consequences.

“When I was young, I associated black kids I would see as being the trouble makers,” explained Fets. “Sometimes they were. I don’t know if you’d call that a prejudice or not.”

However, Fets’ mentality has changed as an adult, having been exposed to more diversity.

“I would like to say that today I am friendly with everyone and I give everyone a chance but at that time there was not a good chance that you’d have other ethnicities within your circle of friends.”

Because of this limited contact with members of other racial-ethnic groups, prejudice is far more likely, according to a 2011 study from the International Journal of Intercultural Relations.

The study goes on to mention that intergroup contact also increases the likelihood of trust and forgiveness for past transgressions. Intergroup contact not only improves relations between various races but also individuals who identify with different sexual orientations, the disabled and the mentally ill.

Fets has encountered more black Grosse Pointe residents in recent years and considers them to be a welcomed addition to her community.

“I see wealthy black families in Grosse Pointe and I think good for you,” she said. “I know they’ve faced challenges and I imagine they have had to work hard, harder than us.”

Race is not the only area where Detroit and Grosse Pointe contrast. The median household income in Grosse Pointe Park, according to U.S. Census estimates for 2011-15, is $95,179. A block away, in Detroit, most families make around $25,764, with almost half of Detroiters living in poverty. The view down the Detroit side of Kercheval Avenue, just before the Grosse Pointe border. Many businesses have closed, likely due to the dwindling population and economy of the city.

The difference in wealth between the two areas is stark. While on one side of Kercheval Street, there are pristine sidewalks, bustling businesses and well-to-do patrons, the other side tells a story of a once prosperous city that has since been abandoned.

“Back then there was more diversity; there were white people in Detroit,” said Matthews. “There was more community involvement.”

However, despite the shocking statistics on poverty and crime in Detroit, Matthews and Wilson believe that Grosse Pointers are much too quick to generalize Detroiters and moreover, blacks.

“[Grosse Pointers] don’t know who is who. They just categorize us into one skin color,” explained Matthews. “Everyone who has this skin color is about the same thing. If you live in this city, you’re the same and that’s just not true. They block us out and it’s very insulting.”

Matthews is referring to the physical blocks placed on roads where Grosse Pointe and Detroit meet.

Although there have been plenty of barriers built in the past, the most recent and controversial was the snow-wall-turned-barn-barricade on Kercheval Street and Alter Road.

“On one hand I think what’s so wrong about it,” said Fets. “And then Detroiters say we are blockading them out and I don’t know, maybe we are.” A few steps away from the Kercheval Avenue and Alter Road intersection. This spot marks the entrance to Grosse Pointe Park, where a snow wall and barn barricade once stood.

In 2014, a giant snow wall was erected in the middle of Kercheval at the two cities’ border. When the seasons changed and the snow melted away, a new method was used: a farmers market.

However, Detroit had not approved of the blockade, therefore making it illegal. This caused much tension between Detroit’s mayor, Mike Duggan, and Grosse Pointe Park officials, as well as residents on both ends.

Eventually, the block was removed and a one-way lane was created for Detroit traffic to enter Grosse Pointe, but not the other way around.

Liberty Fets, the daughter of Claudine Fets and a sophomore at Michigan State University expressed outrage regarding the constant efforts to isolate Grosse Pointe from Detroit.

“That made me so mad. And what they changed it into isn’t any better. Have you seen it?” she asked. “I think it’s the dumbest thing Grosse Pointe has ever done.”

Liberty Fets grew up in Grosse Pointe like her mother, Claudine, but in a different time.

“Growing up as a kid it was fun because our family lived close by,” she explained. “But as a teen it started getting boring.”

As she got older, Liberty Fets began spending more time in Detroit.

“If I was going to Detroit people would tell me to bring a second wallet or bring a pocket knife or mace. Run red lights if you have to, don’t get stuck in between two cars.”

She explained that the fear of Detroit was instilled in children from a young age and it wasn’t until beginning her education at Michigan State University that she became more aware of the social isolation she experienced in Grosse Pointe.

Although she grew up in the 2000s, Liberty Fets still encountered racism and intolerance from her peers, just like her mother did.

“People would always say Detroiters were ratchet and ghetto. Growing up I didn’t see an issue with it because I was ignorant,” she admitted. “I just assumed Downtown was nice and everything around it was ghetto. I never actually explored those areas, that’s just what people would tell you.” Liberty Fets explained that black culture was acceptable at her school, but black people were not.

“Girls would wear cornrows, a girl once wore a du-rag for a spirit day. A lot of kids would say the N-word, and all of them were white,” she said. “They talked so much trash about [black people] and then would wear their hairstyles.”

In 2016, a Grosse Pointe South High School student was suspended for having posted a picture of himself with the phrase “I love n*ggers” scribbled on his bare chest. Another student was seen in a video saying he wanted to bring back slavery.

Liberty Fets recalled this ugly side of her community and expressed her disappointment.

“It’s sad but that’s the perception of Detroit. But you have to get out and meet people and see that not all Detroiters have that negative agenda,” said Matthews. “We didn’t have the mother that had the credit or the college education or the money to give us the life a lot of others have had but that doesn’t mean that we are bad people or that we didn’t want it, too. It just didn’t come to us as easy or as fast.” All parties interviewed agreed that there need to be more communal efforts between Grosse Pointe and Detroit.

Claudine Fets is involved with The Moross Greenway Project, which works on beautification efforts in the bordering areas of Grosse Pointe and Detroit. She explained that the project emphasizes the involvement of members of both Detroit and Grosse Pointe, in order to bring more unity to the area.

When asked what she thought the solution to the Grosse Pointe and Detroit divide was, Liberty Fets pointed to a tattoo on her arm that read, “be nice.”

“I think that’s a start,” she said. “It definitely won’t solve anything but it’s a start.”

“I think Grosse Pointe and Detroit need to intertwine somehow through community efforts,” she said. “Have a concert right on Alter.”

Marlon Wilson also felt that both cities need to work together.

“It’s the responsibility of Detroit and Grosse Pointe,” he said. “We need to have unity and accept one another.”

Both sides also expressed a desire to be understood.

“Bad decisions don’t define someone’s character,” said Matthews. “Just because you’re here or you have a certain skin color doesn’t mean you can’t achieve things. People need to understand that there are differences but to respect those differences and each other. You might not agree with it, but try to understand.”