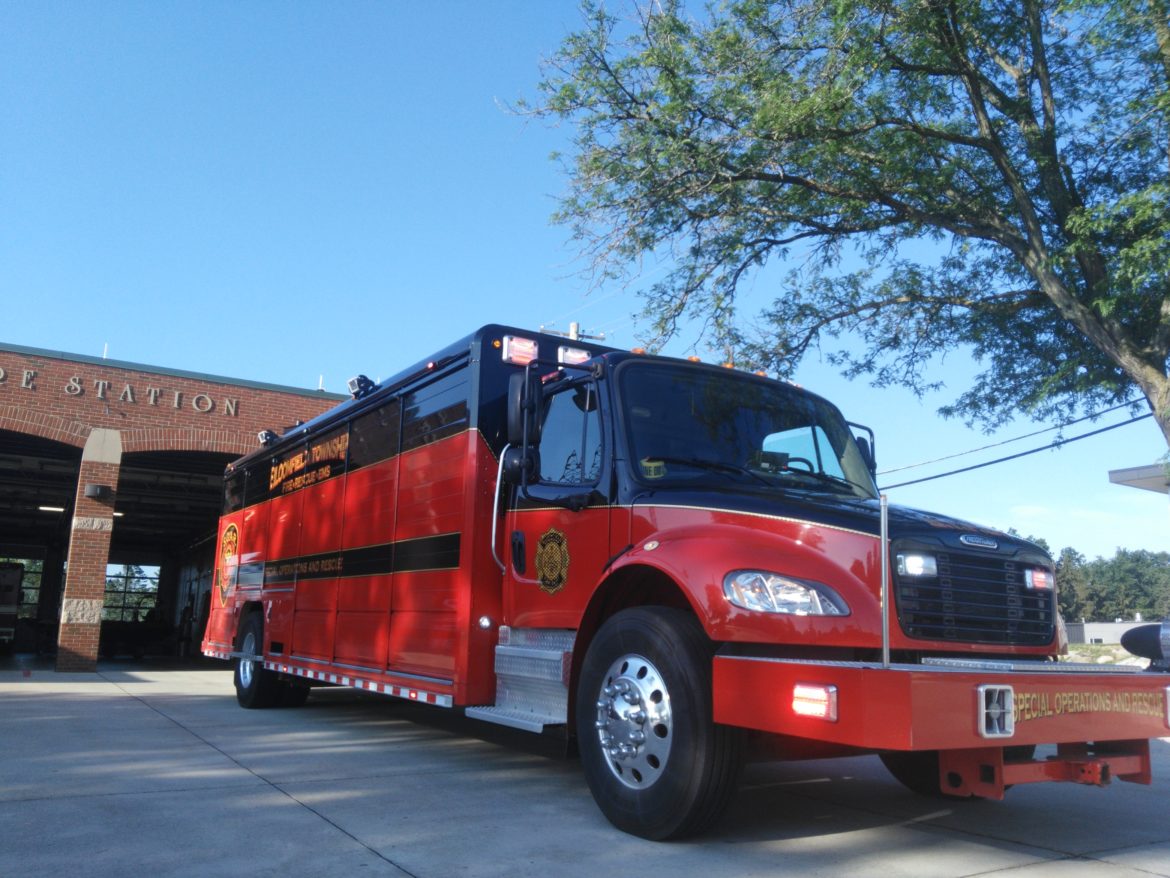 One of the Bloomfield Township Fire Department emergency vehicles. Courtesy of the BTFD

BIRMINGHAM, Mich. — According to the Federal Highway Administration, traffic accidents are the leading cause of death for emergency responders and law enforcement personnel in the U.S. Just a few weeks ago, on Wednesday June 14, Fire Chief Edward Switalski with the Comstock Township Fire and Rescue team was responding to a roadside emergency when he was struck and killed on I-94 by a distracted driver.

Tragedies like this are happening across the country and beg the question why are first responders so vulnerable on roadsides?

Commander Scott Grewe has been with the Birmingham Police Department for the past 18 years. During this time, he has had a chance to notice the evolution of safety procedures for first responders and make amends to some of the problems he thought existed.

“We now have reflective vests to give to our officers and they are required to put them on when they are doing traffic stops,” Grewe said. He also quickly noted that “we didn’t have this years ago.”

Grewe also believes that training is at the base of any improvement in safety carried out by his department. “

We do training on how to position yourself and your car on traffic stops.” He believes that this gives officers more protection in case of a car accident.

The Birmingham Police Department has jurisdiction over parts Woodward Avenue and Telegraph Road, which are multiple lanes each. These roads, according to Grewe, are the most dangerous in the jurisdiction and he is proud that say that “during my time as commissioner we have improved in making sure that traffic stops in these roads are safer.”

The Federal Highway Administration is responsible for providing safe transit throughout the nation. Doug Hecox is the spokesman of the FHWA based in Washington D.C.

“The first responders are often putting themselves at risk by helping others,” Hecox said. He is aware of the issue of safety  that is affecting first responders and assured that the FHWA  is “actively trying to improve their safety through training as it is an important part.”

More specifically Hecox said that “3 years ago, we have developed a training program, a Transportation Incident Management safety training program, designed to ensure that first responders are safe on the road.”

Hecox said that this program includes “how best to position their vehicles and themselves so that they are safe while at the roadside.”

This program has already trained about 250,000 first responders and, according to Hecox, it is predicted to reach the half a million mark within the next five years.

Data showing the quantity of trained professionals with respect to the total.

Many first responders have already taken part in the training program. However, this graph also shows the total number of professionals that are scheduled to take it as to give a better idea of where the process is heading.

Firefighters have been the group of first responders most directly affected by this training. Captain of the Bloomfield Township’s Fire Department Kevin Cardinali has more than 21 years of service under his belt and said “[he] can tell you from day one, that working in the roadways is the scariest thing to do.”

He believes that “people are not conscientious of what is going on and even if they are not being careless, they have no idea what it is like to having a car pass three feet away from you even at 25 miles an hour.” He continues, “I have had many close calls.”

The Bloomfield Township Fire department is very proactive as far as safety. Cardinali explained that they started using reflective vests even before they were required by law. He adds that in his fire department “we educate ourselves on how to position ourselves while working on the roadside which creates what we call a shadow.”

This is the training that Hecox was talking about, as this district has already gone through he training. Cardinali defends this training from some of the critics by saying that “even though it is not 100 percent protective, it is safer” then what they had before.

Michael Mitchell has been driving his taxi for 20 years. “Every day I see vehicles stopped at the side of the road and I do my best to move over one lane” Mitchell said. He has never been involved in an accident, however he has seen many collisions during his 20 years on the roads of Detroit.

This has led him to believe that the issue of first responders safety can only be solved by changing the way people drive. His belief is that “it is our job to keep the people that protect us safe and the best way to do this is not via training, but through better educated drivers.” One of the Bloomfield Township Fire Department emergency vehicles.

While Cardinali has seen firsthand the benefit of the training program, he also said that “public education, whether in driving education or public service announcement” is the best way to move forward.