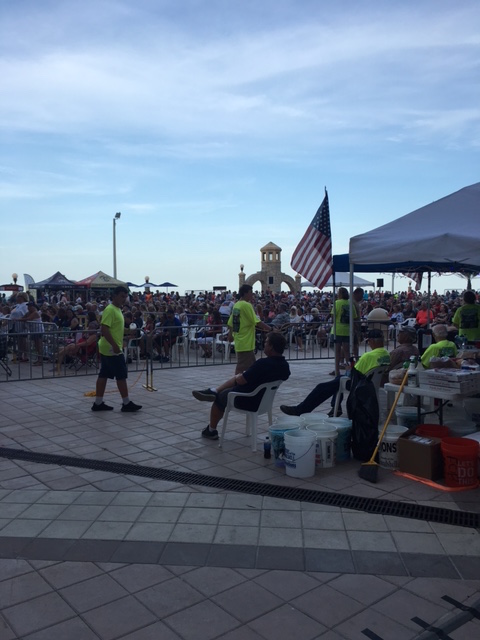 The crowd in Daytona Beach fills in the early evening, July 4, 2017. Photo by Chase Michaelson

DAYTONA BEACH, Fla. — The sun set this past Fourth of July over Daytona Beach in much the same fashion as it has for years: accompanied by thousands of people, on the sand, in the water, and on the pier.

An Eagles tribute band did stirring renditions of “Hotel California” and “Desperado.” The fireworks show was tremendous, chants of “U-S-A!” sporadically broke out amongst the inebriated Southerners, and the mood was joyous. It was, for a night, like the Recession of 2008 had never happened. The crowd in Daytona Beach fills in the early evening, July 4, 2017. Photo by Chase Michaelson

“Tourism has definitely been on the upswing since the recession,” Kate Holcomb, the Director of Communications for the Daytona Beach Area Convention & Visitors Bureau, said in an email.

Since the all-time lows of 2007-2009 in terms of hotel occupancy, tourism has returned en masse to Volusia County. Today, the atmosphere is a far cry from its youthful, wild reputation, as the host of MTV’s Spring Break in the 1990s. It is downright family-friendly.

“Beach tourism is up in the United States primarily because of fears about terrorism in beach locations abroad,” says Dr. Howard Adler, a professor of hospitality and tourism at Purdue University. “There is a sense amongst Americans that other locales might not be safe, so it’s best to just take a trip to the more local beaches. Hotel occupancy nationwide is actually at an all-time high.”

“We’ve been coming to Daytona every year for the Fourth for about 10 years now,” says Alan Pearson, 54, of Knoxville, Tennessee, in reference to himself, his wife Catherine, and their two sons. “We come to the race and we stay for the fireworks.”

The race is the Coke Zero 400, a NASCAR race held every year the weekend preceding the Fourth, the second-most prestigious race of the year held at Daytona International Speedway, after the Daytona 500 in February. The race attracts many Southerners like Pearson to Daytona every year, with the primary markets being located in the U.S. and east of the Mississippi, according to the Visitors Bureau.

“One of the advantages of planning a vacation in Daytona Beach is there are over 200 places to stay with more than 12,000 rooms,” says Holcomb. “We have a growing number of flag hotels in the market now and a good deal of new development going on but we also have many smaller and family-owned properties and boutique hotels as well.”

“There’s a lot more flexibility in terms of making reservations in the car now,” says Dr. Mark Bonn, a professor of hospitality at Florida State University. “I can remember when you had to book months in advance through a travel agent. Now, if you want to go on a weekend beach trip, you have sites like Expedia, Airbnb, etc. It really helps beach tourism in general, because that tends to be more spur-of-the moment. ‘Say, let’s go to the beach.’”

Pearson and his family have stayed at the mid-level Daytona Beach Resort for the past several years. “We like it because it’s close enough to the pier [1.9 miles], so we can be near the action if we want, but it’s also far enough away that we can relax. And we love to relax.”

The good old days may never be back, but in Daytona, every Fourth of July weekend, you can feel their essence.