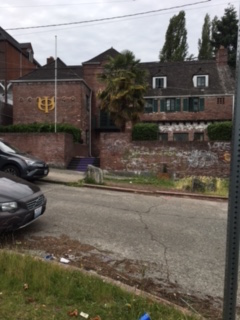 The Phi Kappa Psi house at the University of Washington. Photo by Chase Michaelson.

SEATTLE — As the spring quarter winds down at the University of Washington in Seattle, finals are taken, last hoorahs are undergone, and goodbyes are shared. However, some people don’t feel like going home for the summer. For young women, the options include dilapidated dorms, expensive Seattle apartments … or frat houses.

“I hate going home and I have a job here, but you can’t get an apartment for three months in Seattle,” explains junior Sydney Smith, a Public Health major from Reno, Nevada. “I’m actually not even in [Alpha Chi Omega] anymore, but I still like to live in.” For $475 total for the three months of summer, Smith lives with the brothers of Phi Kappa Psi. The Phi Kappa Psi house at the University of Washington. Photo by Chase Michaelson.

The appeal for young women, often but not always members of sororities, is obvious. It’s an incredibly inexpensive and surprisingly clean option. “We serve as the maids for the summer to make sure the house is spotless,” says JT Matthews, the rush chairman of Pi Kappa Phi. So, it’s not a stereotypical dirty, wild frat house? No, says Matthews.

“The atmosphere is a lot different during the summer,” he says. “The brothers that live in clean twice a day, because we know the girls are used to their environment being clean, so we really try and respect that.”

For women like Smith, “living in,” as it is known, gives them a chance to consolidate friendships and live in a highly social environment, one that sorority sisters in particular will have grown accustomed to from living in sorority houses during the year. “It sounds stupid, but it really feels like they’re all my brothers. It’s not some thing where all the guys are trying to hook up with you, they really, really respect us. I haven’t heard any complaints from any of the girls that have lived in at Phi [Kappa] Psi,” she says.

Fraternities at a school in a huge metropolitan area like Seattle recruit mostly during the summer months, so the girls are instrumental in that process. “Before we let a girl live in, we make sure that her schedule will allow her to be an active member of the rush process,” says Matthews. “It’s really the biggest advantage to having girls live in.”

Matthews touches on the social advantages of having girls in the house, but the financial advantages also come into play. “The majority of the fraternities use the income from summer live-ins to support their chapter budget for the summer events,” says David Hotz, the Director of the Office of Fraternity & Sorority Life at the University of Washington.

“The income from the members during the school year ultimately goes to the house corporation, which pays for property taxes, lights, utilities, all of the things associated with owning a large piece of property,” Hotz notes.

Cost of Living in Seattle during Summer Quarter, per month

“We like to use the money also to plan fun events for the brothers and the girls who live in,” Matthews says. “We have movie nights, and we take trips up to Canada and to Eastern Washington. It’s a blast.”

So, even if it is a relative pittance compared to Seattle apartments, the live-in income funds the rush process. “Whenever we want to have a rush event, it always helps for rushees to see girls interacting with them,” Matthews says. A recent high school graduate considering rushing Pi Kappa Phi would certainly be impressed with the “30+ girls” that live in every summer, all of whom are accomplished college students.

Hotz explains that for women who live in sorority houses, the short-term housing is particularly useful. “A lot of these sorority sisters have summer internships in Seattle, and if they’re from out of state, this is one of their only options for affordable living.” Sorority houses are typically not open during the summer.

“These are not just party girls. Most of the girls who live in are serious students that can’t afford to live elsewhere or don’t want to deal with the commute,” he says.

“It’s very quiet during the day,” says Matthews. “During the school year, there’s always people eating and hanging around during in between classes, but during the summer, it’s mostly dead.”

The concept of living in seems to be symbiotic. For the women, it provides an inexpensive place to live in an otherwise overpriced, bustling city. For the brothers, the women fund the rush budget and serve as free advertising for the fraternity.

“I would live in again,” says Smith. “Living in Seattle for nothing? It beats Reno.”