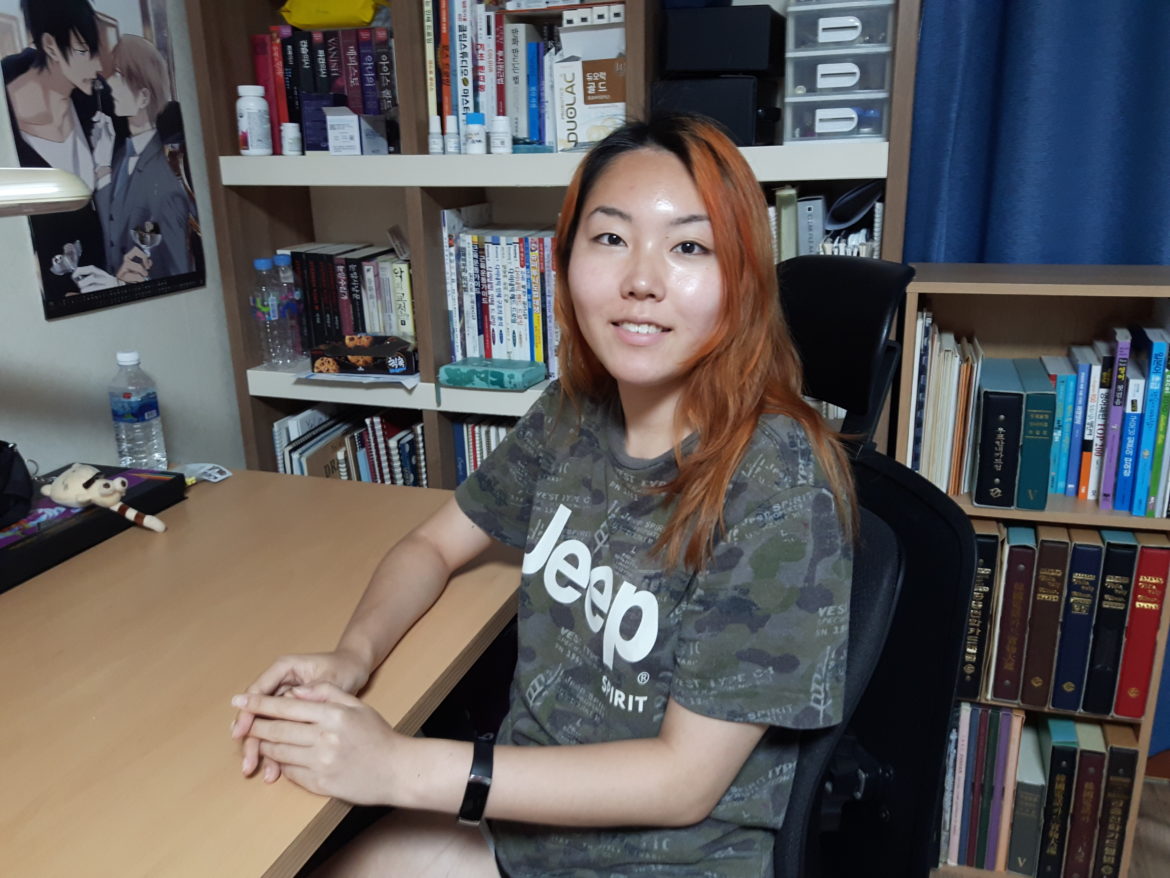 This photo shows Yelin Lee in her room. In her room, she usually practices drawing her own cartoon characters and prepares to be a cartoonist in the near future.

SEOUL — On June 5, South Korean President Jae-in Moon held a Cabinet meeting and proposed the Budget Supplement Bill on jobs. This 11 trillion won ($9.6 billion) supplementary budget will be used for creating 86,000 new jobs and improving the current working conditions of employees. Korean government submitted the Bill to the parliament on June 7. As of June 23, the Bill has not passed the congress yet.

“The current unemployment rate is the highest amount posterior to the year 2002. The government and the congress should face this matter squarely and stand against it. We should all work together to prevent this unemployment issue from being a national crisis,” said Moon in the Congress Speech on June 12.

The Budget Supplement Bill is divided into two parts, creation of new jobs and improvement of the working conditions for the current and future employees.

The government will use the rest of the money on improving the current working conditions of employees. One of the major plans is to support the small businesses by paying the wage of a worker when a small enterprise hires three young people as regular employees. Since small enterprises do not have enough money to hire a large amount of workers compared to big companies, the government hopes that this plan could give the unemployed people an opportunity to work and the small businesses a chance to grow.

Another major plan is to improve the systems of job centers. Job centers are government agencies that are built in different regions in South Korea. Established to help people on their employment issues, job centers perform the on-the-job training of the unemployed people, connect the jobless people with suitable companies, support the start of businesses, and others. The fact box on Budget Supplement Bill on jobs explains government’s plans on the creation of jobs and the improvement of the current working conditions. This photo is the exterior of Goyang Welfare Plus Center.

Goyang Welfare Plus Center serves as the job center for the citizens in Goyang City, a city in South Korea.

“Our center provides various programs for the unemployed people of different age groups. Particularly for the young people, the two major programs that we are running for their employment are ‘Filling the Young Workers’ Tomorrow’ program and ‘Study and Work at Once’ program,” Changho Yoo, Team Leader of Goyang Welfare Plus Center, said.

“This program promotes the young employees to work at the same company for a long time. This could solve the problem of the young people moving to other companies in a short period time,” Dongwoo Cheon, Team Leader of Goyang Welfare Plus Center, said.

Another program called ‘Study and Work at Once’ helps companies to offer their workers an opportunity to receive the work-related education in colleges and have field experiences in their workplaces at the same time.

“According to the analysis done at the beginning of this year, around 3,600 companies and 63,000 young workers are currently participating in this program. As the program is gaining more popularity among the companies and employees, we are seeing the increase in the participation,” said Team Leader of Goyang Welfare Plus Center Eunkyung Moon.

“From those changes in our existing programs, we expect more citizens in Goyang City to lessen their anxieties on employment. We would be glad to see more people having their jobs and receiving proper treatments and welfare in their work,” said Yoo.

People are showing varied responses to the government’s Budget Supplement Bill on jobs. This photo shows Yelin Lee in her room. In her room, she usually practices drawing her own cartoon characters and prepares to be a cartoonist in the near future.

Yelin Lee is one of the people who are both interested in and concerned about this new plan. Lee majored in Comics and Animation and dreams of working as a cartoonist in the future. However, just like the other people who are on their twenties, it is not easy for Lee to find a job.

“From the moment I came out to the society, I had a hard time finding jobs. Although I have not started seeking my real job yet, even finding part time jobs has been difficult. I am afraid that finding my real job will be much more difficult,” Lee said.

Lee thinks the country’s insufficient aids on the elders who are about to retire, the young people who seek for jobs, and the small businesses have caused the current unemployment issue of South Korea. The increase in the competition on finding jobs between young people due to the cut down on companies’ recruitment and applicants’ higher qualifications is the other reason.

Therefore, the government’s new plan on increasing the amount of jobs and improving the welfare of the workers is a welcoming news for Lee.

“Although I am still not sure whether the Budget Supplement Bill on jobs could solve the fundamental causes of South Korea’s current unemployment problems or not, I would like to think positively with this plan. I believe that people like me who are seeking jobs will definitely have benefits from this plan. I hope that it will be easier for me to find jobs when I apply for a job in the cartoon field. I also expect the companies to work on a better treatment of their employees,” said Lee. This photo shows Seungmin Lee in his room, the place where he studies and dreams of becoming an accountant.

As a student who is not seeking for a job yet, Lee learned about South Korea’s unemployment issue from mass media and his family.

“I see many people around me having a hard time finding jobs, including my sister. The mass media also talks about how serious Korea’s unemployment issue is. So, I am a little bit scared and worried of finding my job after I graduate from university,” Lee said.

Lee expects the new plan of the government to be beneficial for not only the workers themselves but also the economy of South Korea as the increase in the consumption will lead to the growth in the domestic economy.

Besides the increase on the amount of jobs, Lee hopes people to pay an attention on government’s new plan to improve the working conditions of employees.

“Although I am glad that more people can have chances to work, I wish the government and the companies could also take a closer look at the welfare of the workers. What is more important than having jobs is working under fair treatment and welfare,” said Lee.

Recent Stories from the Spartan Newsroom