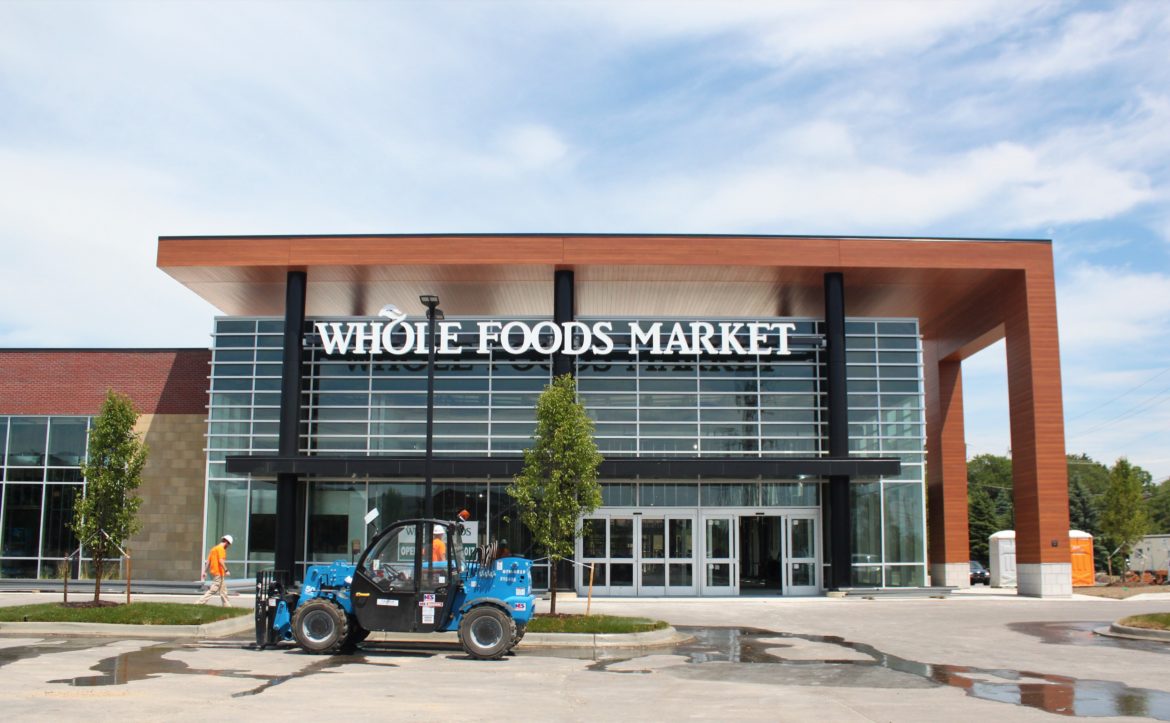 BIRMINGHAM, Mich. — A brand-new Whole Foods store in this Detroit suburb is slated to open in October 2017. The new store is replacing an older and much smaller Whole Foods that was located in Troy. The just-built 46,000 square-feet store is almost double the size of the previous location.

In an announcement released by Whole Foods, Midwest regional president Michael Bashaw commented on the new store: “Now we have the opportunity to improve our service to our customers with a larger store with a much larger selection.”

This larger selection will include a juice bar, more ready-to-eat meals, seafood smoked and bacon made on-site as well as a bakery preparing fresh bread and pastries. In addition to new food services, the business will also allow for shoppers to order food online and pick it up in store.

Head architect of the building, Mike Fitzgerald, discusses the state-of-the-art features of the store as being a part of the Whole Foods experience. “Whole Foods wants people to enjoy the experience of grocery shopping,” said Fitzgerald. “We want to make sure that the enjoyment happening inside is reflected on the outside.”

The building design–down to the materials used–was meant to compliment the preexisting architecture of the area. “We certainly wanted to be good neighbors and be contextual with the new building in terms of the materials…so it did seem like a compatible neighbor, just built in a different time and with a new aesthetic,” explained Fitzgerald.

Although many community members welcomed the new store, the plan faced opposition from concerned nearby residents.

Chris Cueter, a local community leader, expressed his uneasiness regarding the location of the business. “My main concern without question is the traffic that will be caused,” he explained. “Because of the way that cars will enter and exit the facility, it is absolutely going to cause havoc.” Another nearby resident, Jill Bloom, felt conflicted about the new store. “I love Whole Foods because they’re convenient to where we live,” explained Bloom. “They have products we eat every day and their products are high quality.”

However, similar to Cueter, she was concerned with the flow of traffic. “I know it’s going to be an amazing store but living on the first street north of Maple, it’s a huge concern because I don’t know exactly what will happen with the traffic down my street.”

Since Maple Road already has heavy traffic between 3:00 p.m. and 6:00 p.m., the added vehicles that are anticipated due to the new store has led residents to believe that many drivers will cut through their neighborhood to avoid traffic.

Before construction of the store was approved, not many residents were aware of the pending plans. As an informed resident, Cueter decided to take matters into his own hands. “I personally paid to have the entire area canvased and that led to about 100 people showing up to the community meeting,” he said.

However, despite his efforts, he felt the government leaders disregarded their community’s concerns. “It became apparent that they were going to do what they wanted to do. They made significant changes to the design of the store but that didn’t influence the traffic.”

Both residents explained that they were happy with the development taking place in their community, including new businesses like Whole Foods; however, the placement of the store remains a major concern.

Birmingham planning director Jana Ecker said that there was plenty of community involvement surrounding the arrival of Whole Foods as well as efforts made on the part of the city to improve traffic in the surrounding area.

“There was a lot of excitement about Whole Foods coming closer and onto the Birmingham side because it used to be in Troy and it was an old rundown store,” explained Ecker. “There was also concern about traffic and increased congestion so there were a lot of traffic studies and work done to upgrade the signals, change the intersections, that kind of thing.”

In the end, the nearby intersections were upgraded and reconfigured. The city is also adding a pedestrian countdown signal that would increase green time at Maple which, according to Ecker, should improve traffic. During the process of designing the store, Fitzgerald and his team did their best to keep the community in mind. “Whenever we work in a community that we don’t live in, we make sure to study that community,” explained Fitzgerald. “The last thing we want is to be perceived as some outsiders who don’t know the people who live in town and the area.”

Fitzgerald also felt that the built environment of Birmingham was reflected in the design of the store, making it a fit for the neighborhood. He considered the store to be a major improvement for the area.

“Change is inevitable and you’re either changing for the better or for the worst,” said Fitzgerald. “The goal is always to change for the better and the healthier. The work we put in and the openness that Whole Foods had with listening to the community really made the project better.”

Although there are many concerns with the store’s placement, residents are hoping for the best. However, there is little optimism from residents regarding the traffic issues being solved.