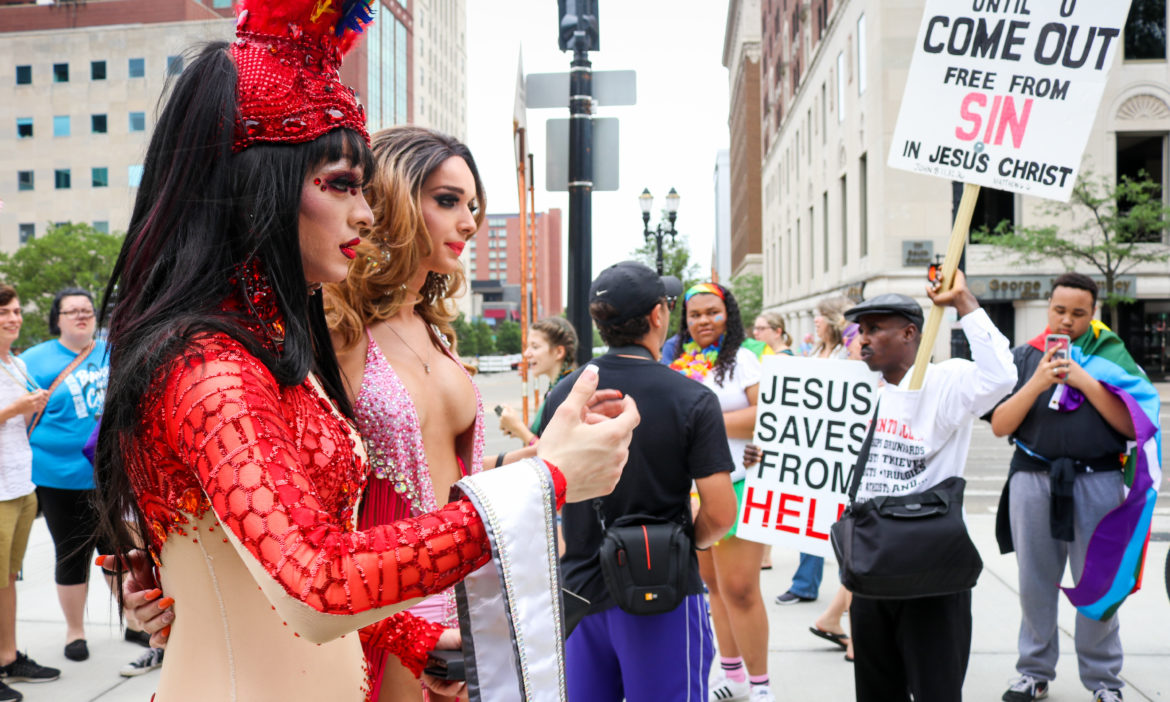 Two paraders are pictured with one of the protestors during the Michigan Pride March at the Capitol Building, East Lansing, Michigan on June 17, 2017. Two paraders are pictured with one of the protestors during the Michigan Pride March at the Capitol Building, East Lansing, Michigan on June 17, 2017.

The well-known cities with gay history are always New York and San Francisco, however, the small cities, including Lansing, all play the important role in the process of legalizing homosexual marriage.

Lansing is one of the most open-minded cities for the LGBTQ community in Michigan. A lot of LGBTQ groups and marches in Michigan were first started in Lansing.

On June 17, a crowd was gathered at the Capitol Building to show their LGBTQ pride. The Michigan Pride March history goes back to 1990. A parader is pictured during the Michigan Pride March at the Capitol Building, East Lansing, Michigan on June 17, 2017. Photo by Kaiyue Zhang.

“Since the 90s, there has been a new push,” said Dr. Tim Retzloff, a Professor at Michigan State University who has been specializing the LGBTQ right movement in Michigan for a long time. “The cultural visibility was becoming much more important. Starting in the mid-90s, it was the first time becoming even possibly publically to discuss that the marriage should become a thing.”

There was a big swing in attitudes from 2004 to 2014. Retzloff believes it has strong connections with the friends and family members of those who openly admit their gay identity.

“More and more people were being out to their family, friends, neighbors, then those people know someone who is gay,” said Retzloff. “They used to have these stereotypes or the thoughts that gay is illegal, and the thing they learned from the media. But then they see the reality doesn’t actually match the stereotype.”

Some people think the LGBTQ ancestors are the reason why their community keep being stronger.

Melanie Morrison, who was a speaker at the Michigan Pride March 27 years ago, now is the Network Of Anti-Oppression Educator, remembers that there were 3,000 to 5,000 people in the Lansing March in 1990 because Lansing was one of the few marches in Michigan, so it made the Lansing March a state-wide event.

But in the last years, there has been an explosion of marches in local cities and towns throughout Michigan. Morrison expressed her thankfulness to the LGBTQ ancestors. Former March speaker in 1990, Melanie Morrison is pictured during the Michigan Pride March at the Capitol Building area on June 17, 2017.

“I am grateful to many LGBTQ ancestors,” said Morrison when she was at the Michigan Pride March on June 17. “Some of who are no longer physically on Earth, who in the time when they faced unspoken violence and discrimination. They came out and they worked for change. We are here because of them.”

Even though the LGBTQ community has been accepted by a large group of people, there still are people against homosexuality and act about it. Dan Widmayer holds a poster with his belief during the Michigan Pride March at the Capitol Building area on June 17, 2017.

Steve Tennes, a Michigan farmer, refused to let a gay couple get married on his property because of his religious belief, then sued the city of East Lansing after he was banned from selling at an open-air farmer’s market because of what he did.

“They will be sent to hell,” said Dan Widmayer, one of the protesters during the Michigan Pride March. “Bible says homosexuality is a guilt. 10 years ago, I was ok with homosexual, but then I decide to help myself and believe in Bibles.”

In today’s Michigan, compared to some other cities, Lansing has more open-minded communities and more friendly environment for the LGBTQ community.

“I moved to Lansing a year ago,” said former Sheridan resident Phoebe Gohs. “I started by being involved with my church and that’s a really open and welcoming community, which is new for me. Compare to Sheridan, which was not a really welcoming community, it is a much more conservative area than Lansing.”