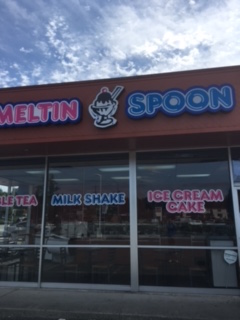 SEATTLE — For generations of Seattleites, like many around the country, Baskin-Robbins and summer have gone together like peanut butter and jelly. But, thanks to a switch in distribution method and unrest amongst local franchisees, Baskin-Robbins are closing and rebranding at an alarming rate in this major Pacific Northwest city.

“I felt like Baskin-Robbins never had my back, and I didn’t want to pay the franchise fee when I didn’t think the name was helping me,” says Burien ex-franchisee Jae Naele. Naele, a Korean immigrant, had owned the location at the Five Corners in Burien for 14 years, when she chose to go independent and rebrand as the Meltin Spoon in February. The Baskin-Robbins in Burien has rebranded: it is independent and is now known as the Meltin Spoon.

The Burien Five Corners store has rebranded, as has one store in Ambaum and another in the Kent Valley. One franchise in White Center has closed entirely, as has the Green Lake location.

Alpenrose Dairy, of Portland, made Baskin-Robbins ice cream in the Northwest for nearly 40 years, but last fall they parted ways, and the distribution costs have gone way up for local franchisees. Baskin-Robbins required local franchisees to purchase their ice cream from Dean Foods in Chicago, which cost more and led to a downturn in the freshness of the ice cream, says Naele.

“Alpenrose was so good to me,” says Naele. “Anytime I needed anything, like a big cake for a birthday party, they said, you know, ‘no problem,’” she says. “When they changed, I had, you know, no communication anymore. It was very difficult to reach the people at Baskin-Robbins.”

“When labor costs go up, as they have recently in Seattle, and distribution costs go up, that’s usually a recipe for franchises to split from the parent company,” says marketing specialist Evan VanBuhler of Online Metals. “Franchisees feel like the fee might not be worth it when it’s costing them far more to make the product than ever before.”

“I was with Baskin-Robbins for, you know, 14 years,” says Naele. “When I said I was going to maybe leave, it just seemed like maybe they didn’t care. I asked them to have a lower fee because it was more to make ice cream and they said no.”

Now, Naele’s reopened franchise still uses Alpenrose Dairy ice cream, but because there is no franchise fee, the cost of the ice cream has actually decreased. This seems to have pleased a customer base that is used to the price of goods dramatically increasing in ever-expanding Seattle.

“Lots of people were wondering what happened [in regards to the rebrand],” says Naele’s employee Russell Owen. “Over half the customers would ask what had happened to Baskin-Robbins, but they seemed content with the change considering the price was a little lower.”

Another opportunity provided by the independence of the store is the ability to sell things that are not typically associated with the Baskin-Robbins brand, such as Italian gelato, which Alpenrose makes and is sold alongside conventional ice cream in-store. “I like that we can sell different things because now, you know, we have something for everybody,” says Naele. The one negative associated with the change appears to be the quality of a limited number of flavors. “Jamoca almond fudge and mint chocolate chip, which are top sellers, aren’t as good,” says Owen, possibly in reference to the more organic nature of the Alpenrose ice cream made without the influence of Baskin-Robbins standards.
Baskin-Robbins did not respond to multiple requests for comment.

“I think that everybody likes our new product the same or more, and I feel like I can do a lot on my own. Own, you know, my business. I don’t need, you know, Baskin-Robbins for that,” says Naele.

It remains to be seen whether other franchisees in the Pacific Northwest feel the same way.