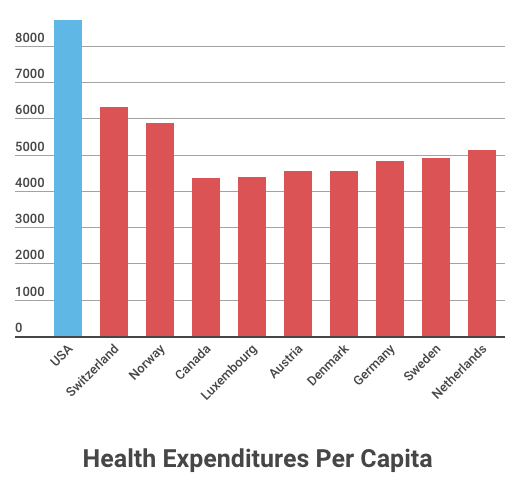 What do Australia, Canada, Japan, Sweden, and Singapore have in common with each other? They’re all countries with universal health care, and their citizens have a higher life expectancy than US citizens. So, why does the current debate on health care in the US not consider universal care as an option?

“It would take a very serious political health care crisis to cause a change in our system” said Leonard Fleck, who is an expert on health care policy. “Something that would make it obvious we needed to address health care access.” Average life expectancy of countries according to geobase. USA is the only country in the graph without a universal health care system.

According to geobase, the US ranks 29th in the world for countries whose citizens have the highest life expectancy.

Although critics of universal health care point to the costs of the system, Canada spends about less than half on health care than the US does per capita. In fact, the US spends more on health care per capita than any other country in the world, according to 24/7 Wall St. Health expenditures per capita in each country according to 24/7 Wall St. USA is the only country in the graph without a universal health care system.

“When you create insurance, it’s meant for people to share risks,” said Charlie Kolean, the Chairman of the Michigan Federation of College Republicans. “So, if there’s people who don’t want to share risks, why should they be mandated to share risks? That’s my biggest question.”

Kolean poses a question many Americans want an answer to when it comes to the Affordable Care Act (ACA): Why should they be required to buy health insurance?

Fleck argues, however, the ACA succeeded in regard to the insurance rate.

“The reality is that the Affordable Care Act provided 22 million Americans with health insurance,” said Fleck.

According to a study done by the American Journal of Public Health approximately 45,000 excess deaths occur annually due to a lack of health insurance.

Although the ACA insured many Americans, Fleck argues it still failed on one of its original promises to bring down health care costs.

“Health care costs are rising every year,” said Fleck. “The right way to compare [the ACA] is to compare it the previous system.”

Fleck says opponents of the ACA often compare it to a previous system in America that never existed. The reality is health care costs are steadily increasing, and they’re rising regardless of whether democrats or republicans are in control of the government.

President Trump isn’t afraid to tell people what he thinks of the ACA:

Republicans tried to repeal and replace the ACA earlier this year, when they introduced the American Health Care Act (AHCA), but President Trump pulled the bill before it could be voted on.

“I felt bad how we couldn’t pass an actual health care plan that wouldn’t implode on itself,” said Kolean.

The introduction of the AHCA may have backfired on the president and his administration, at least that’s what the polls indicate. According to a poll conducted by Gallup, the ACA reached a majority approval rating in April for the first time ever.

In the US, Medicare is the closest program to universal care.

“One difference is if a Medicare patient is faced with a significant copayment, they may deny themselves care,” said Fleck. “That wouldn’t happen in Canada.”

Greg Turner and Annette Benson are both Canadian citizens, and shed some light on what it’s like to live in a country with universal health care:

For Turner and Benson, health care is seen as a public good in Canada.

Fleck believes when you compare the US health system to Canada, you realize a large part of the system in the US is driven by profits.

“There’s only two countries in the world the permit advertising for medical care and medical drugs,” said Fleck. “Those countries are New Zealand and the US.”