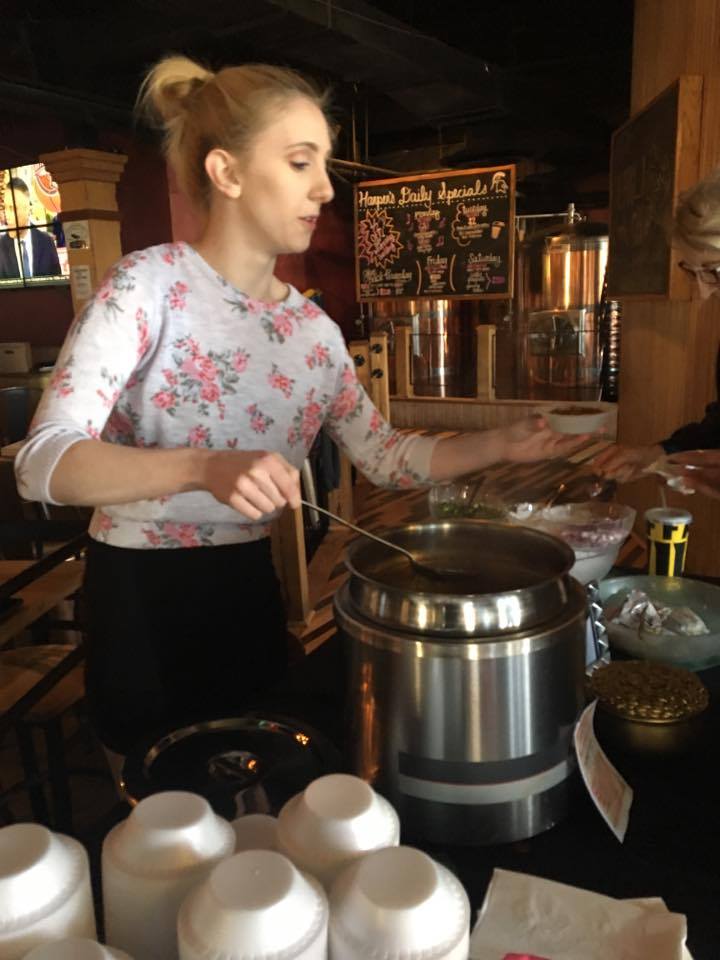 A Harper's Restaurant and Brewpub employee dishes out chili during the annual Chili Cook-Off on April 1.

The streets of downtown East Lansing were bustling with people of all ages in search of the perfect cup of chili on April 1 during the third annual East Lansing Chili Cook-Off.

HopCat was the winner of this year’s cook-off. The restaurant was awarded the golden spoon for its chili. This is HopCat’s third consecutive win at the cook-off.

“We went with the mainstay recipe because it’s the heavy hitter,” Maddox said. “Hopefully we get some return guests. We want people to say ‘Man, that chili was really good, maybe we’ll swing by again and get something else.’”

Others businesses that brought the heat included Harper’s Restaurant and Brewpub, The Riv, Buffalo Wild Wings, Beggars Banquet and more.

Textures ranging from thick to thin, spicy to mild and vegetarian to meat packed chilis were handed out to participants throughout the day. Participants then voted on their favorite chili by using scorecards provided by the business.

Maddox said he enjoyed watching faces light up as servers poured cups of chili. He said he will use the feedback to learn what to improve on.

“You get to try a little bit from a lot of restaurants rather than just you settle on one restaurant and that is where you’re at and that is what you got,” Maddox said. “It is fun because you’re the judge and it’s a fun competition, orientated around the guest.”

Art and music were also featured at the event.

“We heard really positive feedback from the downtown businesses and they felt like they got some foot traffic,”  Schlusler said.

Schlusler said city officials would like to see more people in the future.

“We want to create an event and activity that is welcoming to all ages, whether you have a child or you are a senior resident,” Schlusler said. “Our goal is to have East Lansing be a destination spot.”

East Lansing resident Kylash Sivakumar said this was his first year attending the Chili Cook-Off. He said he went from chili to chili until he decided on a winner.

“I think it was a great event for East Lansing because it brings together the community and allows everyone to enjoy the art happening near the stage and preps everyone for the summer events happening downtown,” Sivakumar said.