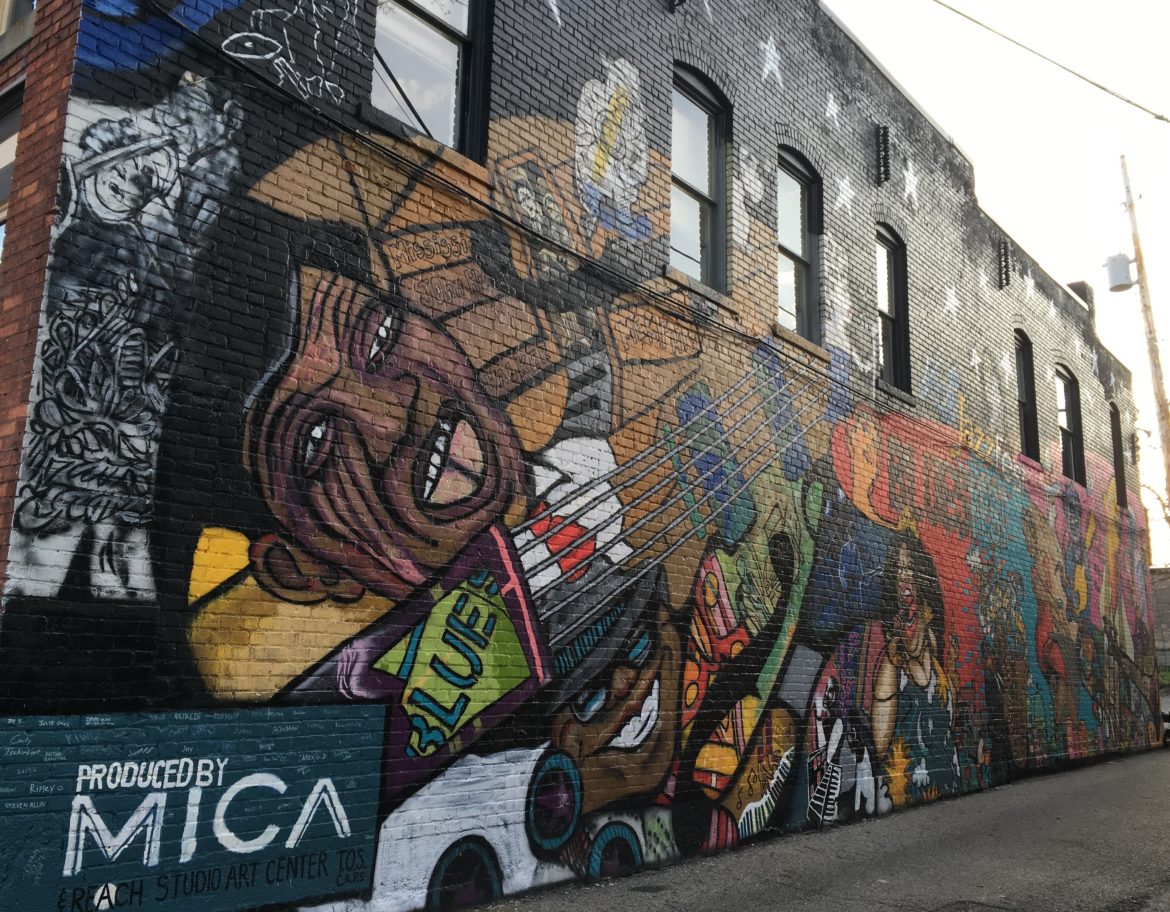 A large mural painted on the side of a building is one of the first things visitors to Old Town see. Photo by Kaley Fech.

One of the first things visitors to Old Town may notice are the large letters reading “Art District” along the fence at the end of Turner Street. A large sign welcomes visitors to the art district. Photo by Kaley Fech.

Old Town Lansing is known as the Art District, and for good reason. There are several art galleries located here, including Absolute Gallery, Great Lakes Artworks, Katalyst Gallery, and the Michigan Institute for Contemporary Art Gallery.

These galleries feature a variety of artists. Great Lakes Artworks, located at 306 E. Grand River Ave., features artwork created exclusively by artists in the Lansing area. The gallery also participates in Arts Night Out, held every other month on the first Friday of that month.

Artist Craig Mitchell Smith referred to Old Town as the ideal place to be. Smith works with glass and has both a studio and retail gallery in Old Town. Smith with one of his pieces. Photo courtesy of Smith.

“I love Old Town,” Smith said. “This was my original dream. As soon as I realized art could be my career, I thought about where I’d want to be, and it was Old Town.”

Smith also said that in Old Town, he really feels like a member of the arts community.

Elderly Instruments, which has been in the area since the 1980s, brings in musicians from the Lansing area as well as from out of state.

Ken Schroeppel, an assistant professor at the University of Colorado Denver and an expert in downtown revitalization, said that uniqueness is a very good sign for a community.

The many festivals that take place in Old Town provide a great deal of uniqueness for the community.

Old Town has a variety of festivals, especially during the summer months, which bring in people from all over Michigan. Some of the larger festivals attract performers from across the nation. “We have teams for ScrapFest that come from all over Michigan,” said Jamie Schriner-Hooper, the president of the Board of Directors for the Old Town Commercial Association. “We have musicians who play at our festivals from all around the state as well. BluesFest and JazzFest attract national musicians.”

According to the official Old Town Commercial Association website, the Old Town ScrapFest is a unique two day festival that promotes art, creativity, and resource reuse. Sculptures such as this one can be found all over Old Town. Photo by Kaley Fech.

“The first one was in 2009, and since then, it’s really come into its own,” Bass said. “It’s awesome for us because it’s amazing what people go out of the facility with and come back with a few weeks later.”

Brian Ohm, a professor in the Department of Urban and Regional Planning at the University of Wisconsin-Madison with a research interest in downtown revitalization, said that festivals and art shows are common in revitalized cities as a way of attracting people to the area and because of the unique venues that revitalized cities often offer.

During the month of June, Old Town will celebrate Chalk of the Town. This is a family friendly event featuring artists who create masterpieces on the sidewalk using only chalk. The Festival of the Moon and Festival of the Sun are also in June. These events celebrate the shortest night and the longest day of summer, respectively. However, keep in mind that these two festivals are for those over 21 years of age, as the event includes wine and craft beers.

In July, the community will host the Old Town ScrapFest. With August will come the Lansing JazzFest, Renegade Theatre Festival, and ArtFeast. To close out the warmer months, the Michigan BluesFest and Old Town Oktoberfest will take place in September.

Although they spend much of their time in Old Town, the local artists can’t seem to stay away from the festivals. Smith said he attends every single festival each year, and he has even been a sponsor for ScrapFest. However, he said his absolute favorite festival is BluesFest.

For dates and more information on any of these events, visit the calendar on the Old Town Commercial Association website.

According to Schriner-Hooper, the revitalization of Old Town is based completely on the arts.

“Old Town’s revitalization happened because of the arts,” Schriner-Hooper said. “A number of artists moved into the area and started to hold events. We continue to have a thriving arts scene. New events like Arts Night Out, which is hosted by the Arts Council, and attracts hundreds of people into businesses on a regular basis, and Old Town ScrapFest, which grows every year, only proves to show that the arts scene is alive and well.”

Ohm said that this is not unusual.

“We have many examples of many recent successful revitalization efforts in cities across the U.S.,” Ohm said. “Some high tech start up companies, art galleries, artists, brew pubs, interesting food establishments, unique stores are attracted to areas being revitalized.”

Bass has found that events like ScrapFest do more than celebrate art; they also bring money into the Old Town community.

“Last year was the first year we had ScrapFest on Turner Street, and I was able to walk into the various stores,” Bass said. “Stores were reporting record sales. The event isn’t just a destination for people, it also helps the economy of Old Town.”

In the Old Town community, all of these various types of establishments are visible.

Bass believes that it is not only the artwork, but also the artsy feel of the area that have made Old Town successful.

“Anyone who’s been to Old Town can see that each of the businesses has a different feel,” Bass said. “That’s what gives it its own uniqueness and quirkiness, and that extends into the art.”

Lilian Werbin, daughter of Stan Werbin, founder and owner of Elderly Instruments, said that they participate in the festivals, and they also help to bring in musicians.

“We’re where the musicians come,” Werbin said. “So we get asked if anyone wants to participate in the shows. We also volunteer our parking area. Whatever is needed to help out.” A sculpture in Old Town. Photo by Kaley Fech.

Ohm said that promoting the arts is a common theme among revitalized downtowns.

“Promoting the arts is a common approach used by cities that have revitalized their downtowns,” Ohm said. “Often there are art galleries, studios, lofts, and other venues that fill the interesting spaces that are found in most downtown areas…local artists provide unique and interesting local products that are not commonly available.”

According to Schriner-Hooper, the goal is to make Old Town a midwest destination. This is possible because the many art galleries, boutiques, and festivals draw people to the Old Town community. The uniqueness of the area helps it to not only survive, but to thrive.