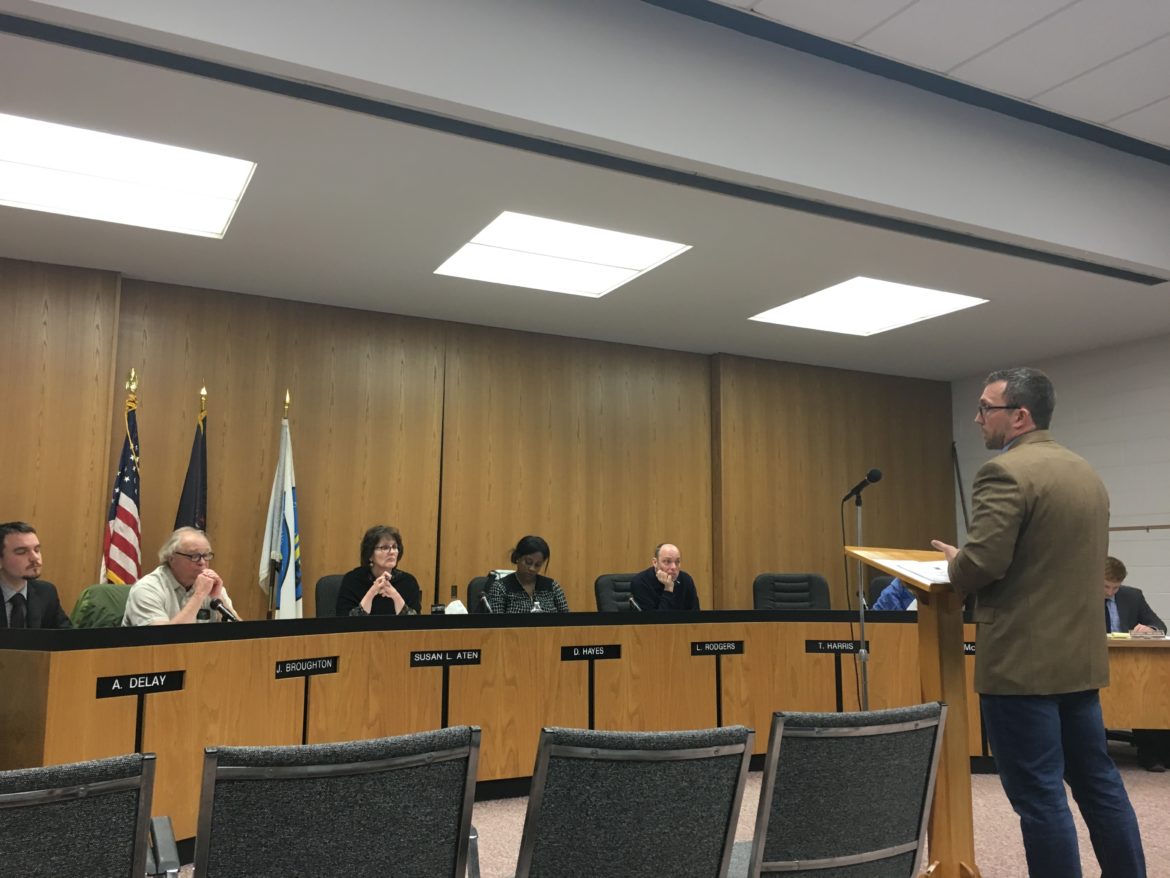 James Barr (far right) presents the highlights of adopting HB-4209, 4210, and 4827 as township ordinances to the Lansing Township Board of Trustees on April 4, 2017. Photo by Casey Harrison.

New laws regulating the medical marijuana industry could have the possibility to generate heavy profits for Lansing Township, should they choose to participate in a new statewide program.

James Barr, founder and president of Strata Business Services in Lansing, spoke at the Lansing Township Board of Trustees meeting Tuesday to discuss the adoption of three new state laws that will help further regulate the growing, cultivation, manufacturing and distribution medical marijuana products in Michigan.

While all of the potential economic benefits could do Lansing Township a lot of good, township officials are still skeptical about jumping completely on board.

“It sounds like there is a loose framework of the law,” township trustee Adam DeLay said. “But now it’s in the administrative rules process for LARA and it’s trying to flush out what specifically it will look like and what loopholes will there to go around … We just have to wait and see at this point.”

DeLay, along with other members of the board said they seem interested with the concept and think that the new bills could bring in significant revenue for the township, but the idea of having a large sum of marijuana plants could bring more trouble than good.

“I think with the discussion that we had there is obviously a lot of pros when you talk about the economic incentives to the township,” DeLay said. “Obviously it will increase revenue from licensing, to property taxes, from the excise taxes that we get, but one of the points (Lansing Township Clerk) Susan (Aten) brought up is that you have to mix all that with who would be checking the licensing, who is going to have the facilities that will be distributing the medical marijuana, and obviously they could be a target for theft, which means you have to worry about increased policing.”

Other township officials believe the troubles would be from complying with state law. Any facility that handles or processes marijuana must be established at least 1,000 feet away from schools, playgrounds, daycares and other public buildings.

“I think it introduces layers of complexity that we as a township government will have to do,” trustee John Broughton said. “There’s ordinance work, and there’s a lot of work that goes around establishing whatever we work to build upon. … I don’t know if we have the land area for 10,000 plant greenhouse. We don’t have the big, open land like other townships might.”

“It creates some limitations for us,” Lansing Township Supervisor Diontrae Hayes said. “There’s a lot of things to consider still.”

Barr highlighted to the board the potential economic benefits that would go along with adopting these laws as ordinances. Since all three bills were signed into law by Gov. Rick Snyder in September 2016, Barr estimates it will take about 24 months before the first legal crops and dispensaries open.

According to Barr’s timeline, the state appointed its regulatory advising board, nicknamed LARA, last month and will hold the first advisory board meeting this month. Barr said as the process begins to gain steam, more municipalities will see the benefits from it and will likely jump on board.

“This is a topic that is starting to come up with boards and planning commissions from municipalities trying to value whether they will consider participating or opting into the program or not,” Barr said.

Barr presented a study performed by Dr. Gary Wolfram at Hillsdale College, Barr’s alma mater, were 182,091 patients within Michigan in early 2016 who were given medical marijuana licenses and projected numbers from that study indicate there will be an increase in medical marijuana consumers.

The study forecasts that 284,123 patients will be licensed by the time the law goes into full effect in Sept. 2018, meaning the industry would become more valuable over time with an economic impact greater than gross sales coming from taxes placed on the cannabis.

“There is a very large market that is developing here in Michigan,” Barr said. “We have 250,000 patients here in Michigan, which is the second most in the country, behind only California, and that’s all going to be changing in the next couple of years. It’s great for communities, it’s great for the state of Michigan as far as revenue generation and job creation.”

The first law signed by Snyder, HB-4209, established a three percent state excise tax that will benefit all levels of the state. Each municipality that opts into the state’s regulatory program will receive 25 percent of the tax based on the total number of licenses awarded in their district while the state of Michigan and counties that adopt the bill would each see 30 percent. Pie chart highlighting the three percent excise tax that would be taken from new medical marijuana regulations due to HB-4209 signed into law by Gov. Rick Snyder in Sept. 2016. Information provided by Strata Business Services. Graphic by Casey Harrison.

According to Wolfram’s study, roughly $29 million would be generated from the tax in 2018, and municipalities would share about $7.3 million, based on the number of facilities each municipality have.

In addition, HB-4209 established five-tier medical marijuana regulatory system for profit for manufacturers and retailers and third party transporters and regulators. A company can own licenses for provisioning centers (commonly known as dispensaries), growers’ licenses, and processors, which take the raw materials from growers and make derivative products such as edibles or concentrations.

Barr said the law intentionally goes out of the way to make sure businesses that own one of those three licenses cannot be a transport or warehouse company that delivers products to testing labs or dispensaries, or they cannot be the testing lab themselves to ensure integrity for the medicine.

“So distribution companies, testing laboratories, and third parties cannot own (secure transport and safety compliance facilities) if you’re a manufacturer or retailer,” Barr said. “They separated those to make sure there’s no mixing. There’s independent testing with products, that’s what 4209 established.”

HB-4210 amended the Michigan Medical Marihuana Act of 2008 to include the prescription of THC concentrates, cannabis edibles and other derivative products and established conversion ratios with dried usable hemp flower for possession limit purposes. HB-4827 created a seed-to-sale chain of support to also ensure the legitimacy of the regulations.

“Essentially every plant is tracked through its life cycle and to every single product it ends up being used for,” Barr said. It’s basically called a chain of custody or if a product is sold and there’s contamination they can do product recalls and they can track that product all the way back to the batch that was produced. … That’s pretty standard nation-wide with other states that have regulated systems at this point.”

In addition to the excise tax, Barr also highlighted other potential economic benefits a municipality like Lansing Township could reap with the adoption of these ordinances, with the most important being a spike in property taxes from the additional businesses and an increased local employment rate and the annual licensing fee of up to $5,000.

Baar said he thinks it would also stimulate surrounding service industries and the competition will drive prices down for medical marijuana consumers.

“The more licenses mean more buildings will be purchased or improved and the more people will be employed,” Barr said. So there’s more pure competition that you will see in this marketplace which should bring prices down for patients.

“The consumption of local resources is pretty obvious when you bring in a new business. They’re going to be using utilities, water, hardware supplies, tradesman labor, food, fuel, accounting services, insurance services, graphic design, marketers, all these service-based industries that will support this business. There’s a multiplier that has a large local economic impact with jobs for this industries.” Timeline of events after three laws designed to reform and regulate the medical marijuana industry in Michigan. Information and graphic by Strata Business Services. Photo by Casey Harrison.

For DeLay and other board members, the idea of opening retail provision centers isn’t ideal for the township, but there are still facets of the bills that pique the interest of township officials.

“Where I’m at right now is that I’m very interested with it,” DeLay said. “I think for some of these licenses I could see the township doing it, others perhaps not so. For example, I’m not as crazy about retail as I am about growing and procuring because with retail it opens up a whole other bag. It doesn’t mean I’m opposed to it, it’s just something I would scrutinize more.”

The possibility of the regulated medical marijuana industry sweeping by Lansing Township is still months down the road. According to Barr, applications to opt into the program won’t be available until November 2017 and won’t be awarded until April 2018.

In the meantime, Lansing Township officials will discuss the matter and come to a consensus at a later date.

“All in all, I think the township would benefit greatly from the program,” Barr said. “You have the power to choose which program to participate in and what it can look like for (Lansing Township).”