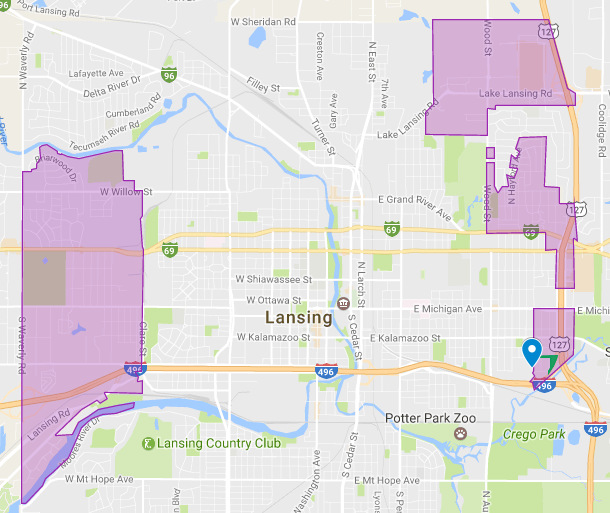 164 years ago, the Lansing State Capitol was located within Lansing Charter Township, but due to annexation it remains within the boundaries of the City of Lansing. Photo by Hannah Holliday

In order to avoid future annexation, the township has taken the necessary precautions.

According to Hayes, the township hasn’t experienced a case of annexation since the ‘70s.

“Nobody has tried to annex us or we haven’t gone through that type of situation at all,” Hayes said.

Hayes also said that there are many differences between city governments and township governments.

Despite these differences, Hayes believes that Lansing township is very urban and sees a lot of the same issues that you would see in a traditional urban city.

John Corbett, who is an associate professor of Community Culture and Global Studies at UBC Okanagan feels that the five separate sections of Lansing Township are a rare sighting.

“I’ve never seen this before, except Germany during the Cold War! Oh, and Point Roberts in Washington State,” Corbett said.

Corbett also believes that the separation could impact virtually every aspect of the township.

“This would have an enormous impact on governance, infrastructure provision, taxation, the relative allocation of core services, the sense of place etc.,” Corbett said.

For businesses located within the township, like Flap Jack Restaurant they see the annexation as no big deal. Flap Jack Restaurant located within Lansing Charter Township doesn’t sees the seperated pieces as an obstacle when it comes to attracting business. Photo by Hannah Holliday.

“I don’t think the divided sections has an affect on the business but I’ve never asked anyone if they are aware they are in Lansing Township,” Ludeania Buell, who is the Flap Jack restaurant manager, said. “I’m not sure how commerce in the township works or in the Lansing area itself but driving around here there is a large volume of people and not a lot of empty houses.”

“Most of our customers are from local communities and support the business,” Buell said. “Three years ago there was a bad ice storm and we were fortunate enough to have power. People came here not just for the food but also for the warmth. People were buying each other’s meals and it really showed the sense of community.”

Cooperation between neighboring communities is encouraged within the township.

According to Hayes, mutual aid agreements are common throughout the state of Michigan and encourage that all fire departments and emergency services come to each other’s aid when necessary.

“We respond to Lansing, we respond to East Lansing, we’ll respond if something is going on in Delhi Township, we’ll all hightail it down there, whoever is in need in this region that’s one of the things we work very well together we will respond,” Hayes said.

Lansing Township Police Chief Adam Kline tries to maintain as much contact as possible with other local law enforcement agencies.

“I am a member of several police chief organizations where we meet and share information about crime, training, mutual aid, and internal processes,” Kline said. “So yes I maintain as much communication with the surrounding agencies as I can.”

Another influence that these annexations have had on the township is the creation of invisible boundaries.

Sarah Nicholls, an associate professor of Community Sustainability, Geography, Environment and Spatial Sciences at Michigan State University believes in terms of public and regional attractions that these boundaries do not factor into people’s decision making.

“If a place provides the right attractions (whether parks, shops, restaurants, etc.),” Nicholls said. “I think those kinds of labels are relatively unimportant. And my guess is that many people would not even know the difference (whether they were in Lansing or the township).”

Nicholls also said that some parks and their facilities located in the Lansing Township and Lansing area are actually managed by the Lansing Parks Department.

“And from a user’s perspective, these kinds of boundaries are often essentially invisible anyway, meaning many people tend not to know where they lie and of course we can cross them completely freely to access public resources such as parks and recreation facilities,” Nicholls said.

“So anyone from any place – any part of Lansing or Ingham County or beyond – can access any public park in any part of Lansing. And in some cases parks do indeed become regional attractions, drawing not just local residents but also non-local visitors,” Nicholls said.

Another local business, Simple as 1, 2, Tan, gets some confused clientele when it comes to their location but doesn’t see it as an issue. Simple as 1, 2, Tan is another Lansing Township local business that sometimes get’s clientele that ask about its location. Photo by Hannah Holliday.

“We get a lot of people who call us to ask where we are located,” employee Haley Bateman said. “But, we also have customers who are willing to travel from places like Holt and Grand Ledge. In order to tan with us, people have to provide their current home address so we can see where our customers are traveling from.”

Boundaries aside, local residents have their own opinions about the separation between the township and city.

Michael Blackburn, has called the Greater Lansing area his home for a long time. He attended Lansing Community College but got pushed through the school system. Now as a Lansing resident, Blackburn, feels that the separation between the township and the city is not viewed as a negative.

Since his home is located on the south side of Ingham County closer to Lansing Township than it is to downtown Lansing, he spends a lot of his time within the township.

“Lansing township is big,” Blackburn said. “Every time I go downtown and park, I get a ticket. I can do everything down here [in Lansing Township] that I can do in the City of Lansing. Lansing instead of bringing the township down to it’s level in a sense needs to bring itself up. There’s places where you have kids walking around with their pants down their butt, that should be an indecent exposure ticket.”

But, Blackburn also feels that too much money is involved in the politics of every area around Greater Lansing and that this impacts things getting accomplished both in the township and the city.

“There’s a lot of control coming from politicians trying to you know like the fight over things,” Blackburn said. “There was supposed to be a casino coming in here. They wanted it right downtown where there was no room and another developer came in and wanted to put it where the old mall is up by DeWitt.

This supposedly caused some tension between Lansing Township and Lansing.