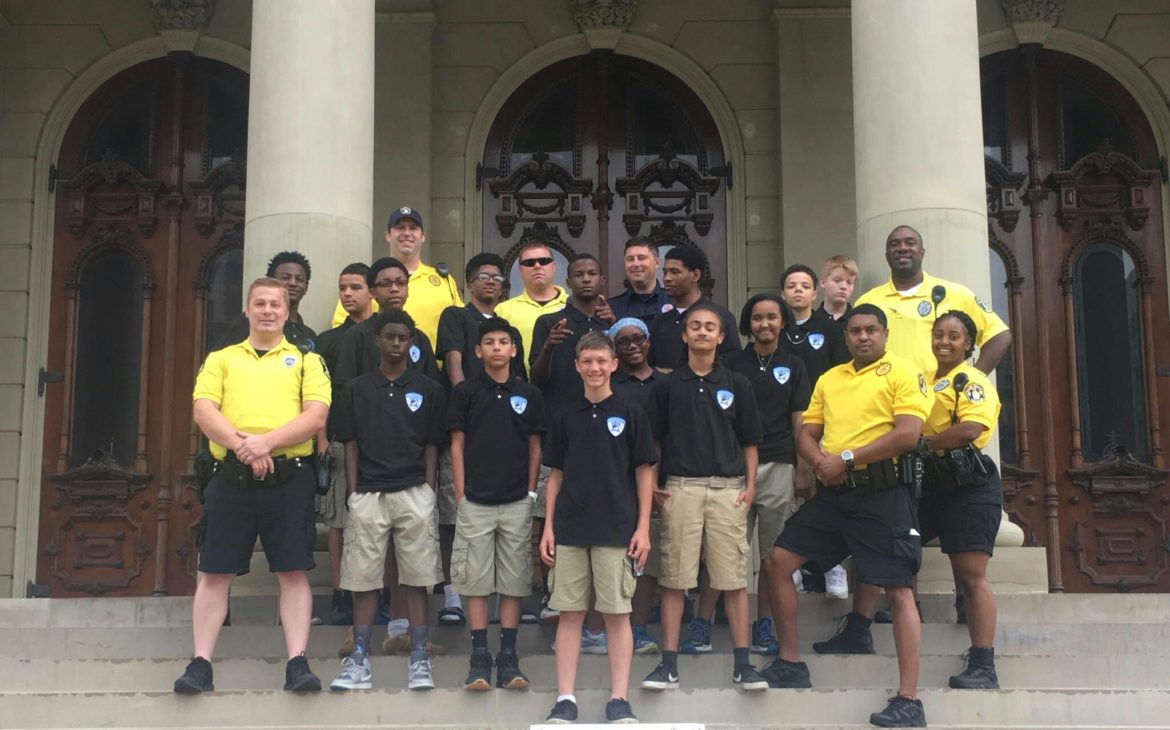 Establishing effective relationships with the Lansing community has been an increasingly focused goal of the Lansing Police Department (LPD) with its specially dedicated Community Services Unit (CSU).

Established in 2016 following the creation of the CSU, the LPSYLA is a week-long summer academy for students in the Lansing Public School system, with instruction from the Lansing Fire Department (LFD), Lansing Parks and Recreation and LPD.

According to Sgt. Matthew Kreft, head of the CSU, Lt. Rodney Anderson was the “main architect” for the LPSYLA. According to Anderson, it took roughly a year of development and research and discussion with the LFD and Parks and Rec – which Anderson says actually aren’t traditionally involved with these youth-engagement programs – to get the Leadership Academy off the ground.

“Most academies don’t merge the police and fire entities,” Anderson said. “I don’t know that there’s any other academy in this region, or in the state for that matter, that does a public safety academy concept that has police and fire involved as well as Parks and Rec.”

According to Anderson, the LPSYLA program modeled overall concepts such as best practices and the basic structure of other youth academies like the one offered by the Michigan State Police. Lansing Police vehicles parked outside of the Operations Center. Photo by Lukas Eddy

He said the goal for the program was have a local concentration of mentoring and resources in addition to what the GREAT program already provides and as a building block for those interested in emergency services and the Police Explorer program.

Kreft said the Police Explorer program is for youth ages 14-21 that is affiliated with the Boy Scouts of America and offers hands-on job shadowing that can get participants qualified for the police cadet program, effectively setting up qualified participants with future job opportunities at the department.

“The dialogue and the process of activities helps to build the relationships and get people on the same page,” Anderson said. “With the academy, it being highly interactive, it sets up police and fire as heros and role models and big brothers and as resources and directors for them to have healthy, constructive goals or avenues to deal with challenges and problems as they move forward.” Students and instructors of the 2016 LPSYLA. Photo courtesy of the Lansing Police Department, Lt. Rodney Anderson and Officer Kasha Osborn.

Anderson is not only the coordinator for the LPS agency for GREAT, he is one of roughly 65-70 members of the GREAT International Training Team that certifies officers in the U.S. and Central America to conduct the GREAT program. He said the LPSYLA was successful during its first year of operation.

“Where these kids started off in the first hours of the first day not really knowing what was going on and then… through the activities and the interaction [they got] to the point where at the end of the academy it was a dynamic experience for everybody,” Anderson said. “We started with 15, we graduated 15 … at least two of the 15 became Police Explorers after the academy. Explorers are highly involved in the academy and serve as peer mentors, but it’s interesting that at least two of 15 have gone on to become Police Explorers.”

Anderson spends a significant amount of time during the operation of the LPSYLA working with the students, where he said he finds enjoyment in facilitating the program.

“The ability to work collaboratively helps us to work together better, the ability to work together helps us to live together better, so we talk about enrichment and quality of life and everything, that’s my favorite part, just serving as a presence that helps everybody to enrich the community together,” Anderson said. “I like bringing everything together.” Skills learned at the LPSYLA can be applied to many other aspects of life – even knowing how to tie a tie. Photo courtesy of the Lansing Police Department, Lt. Rodney Anderson and Officer Kasha Osborn.

While the LPSYLA is new, according to University of Florida Professor Emeritus of Criminology Frederick Shenkman, police outreach to youth has been going on for roughly 100 years.

“There are exceptions to everything, but in my view, probably the first organized program similar to anything like this was the Police Athletic League,” Shenkman said. “That was organized in the New York Police Department in 1914.”

However, Shenkman said that the move toward community-based policing happened more recently, in the 1980s.

“Most probably in recent history, the move towards community-oriented policing probably was the impetus, on a larger scale, for departments to use the concept of police being more than just crime fighters,” Shenkman said.

Professor in the School of Criminal Justice and Director of the Intelligence Program at Michigan State University David Carter agreed about the change toward the concept of community policing.

“There is a long history of police departments sponsoring youth oriented programming — Police Athletic Leagues (PAL) were among the best known,” Carter said.

Carter added that these youth-oriented programs grew with community policing and allowed for police to partner with civic-youth organizations to helps prevent crime and establish citizenship in the youth.

“They don’t have enough officers to be able to spend time having them doing community outreach, you see,” Shenkman said. “But there’s an ironic twist to that…” The locations of police departments and related entities in the Lansing area. Mapping by Google Maps. Graphic by Lukas Eddy.

Despite their small size, the ability for the majority of U.S. police departments to establish good relationships with their communities is not hindered by the limited number of sworn officers and small community. Instead, according to Shenkman, that can help.

“Small-town policing actually has always been better at community policing than large-city police departments,” Shenkman said. “So in some ways large-city police departments are late to the game in doing community policing. Small-town policing, we have one or two officers on the street at a time, the officers usually are from that town and they really went to school with the guy that’s running the general store and they know all the people, and they go to the same church and they shop at the same grocery store and they live in that town.” The Lansing Police GREAT Sportsmobile sits ready for another summer of barbecues, basketball and more. Photo by Lukas Eddy

Lansing is a comparably large community, and the LPSYLA is a program that allows interested applicants to experience more of what emergency services have to offer while building relationships and important life skills like critical thinking, physical fitness and integrity. Students even come away with a CPR certification.

According to Shenkman, building understanding relationships with the community is a very important part of the community policing concept that can be difficult to attain.

“If you’re going to be a partner in the community, you’ve got to be able to speak the same language, so to speak, and have the same orientation,” Shenkman said. “I have great respect for what we expect police to do. The chasm that I think exists is the number of people that don’t have the appropriate background to be able to to live up to those levels of responsibility.”

Kreft noted that both the Explorer program and the LPSYLA are for those who do have a preexisting interest in public safety.

“For those that are actually really interested in it and really had a good time and excelled, it’s a natural path into this Explorer program because they’re already beginning that path towards a career in public safety,” Kreft said. “It’s just that natural next step.”

Shenkman agreed that one week is likely not enough to change a person entirely – there has to be some element of those critical life skills to work with in the first place. Youth have to be enrolled in the Lansing Public Schools and fill out an application to get into the LPSYLA, so those who are not interested in entering such a path won’t benefit from the available lessons.

“You get kicked out of school, you can’t get a job, and if you can’t get a job you’re probably going to engage in some activity to be able to earn some money,” Shenkman said. “So the police working hand-in-glove with the school is a really really good idea.” To apply for the LPSYLA, visit www.lansingmi.gov/442/GREAT Graphic courtesy of the Lansing Police Department.