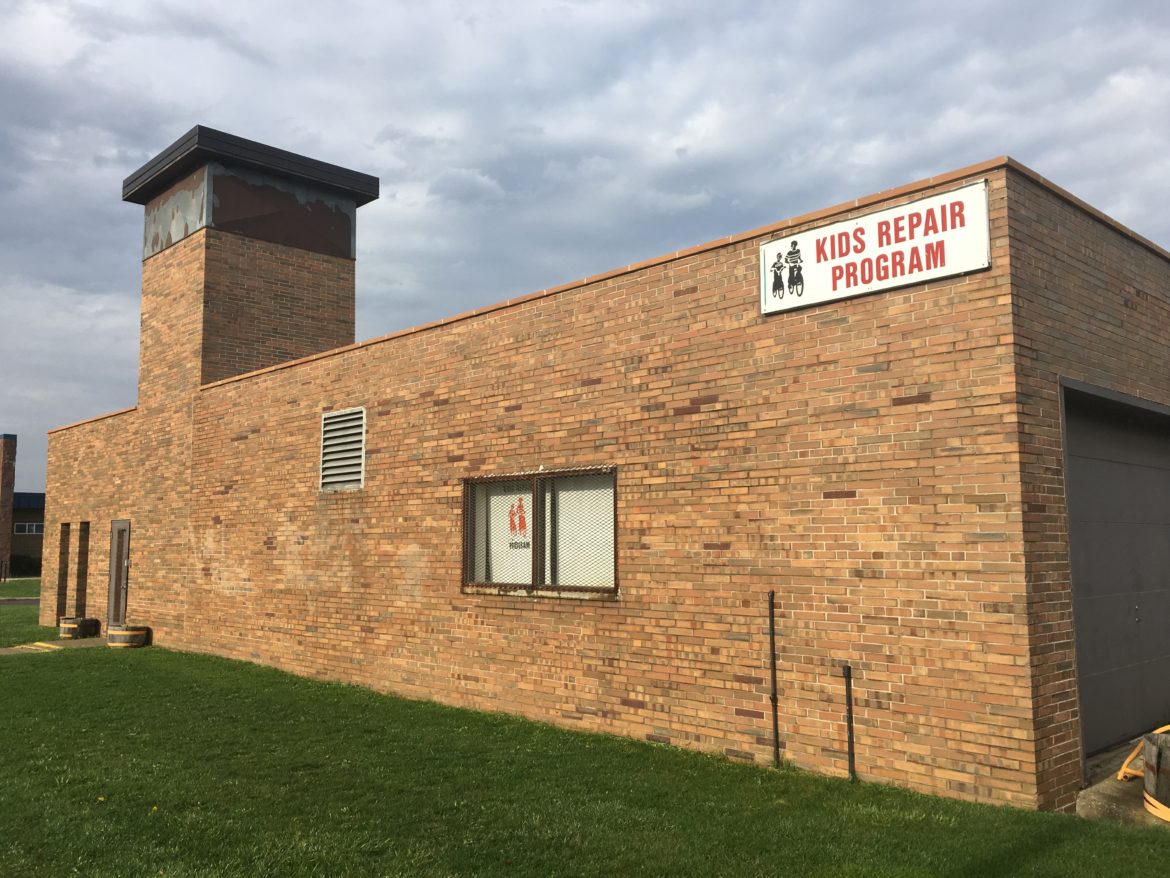 The outside of Lansing's Kids Repair Program isn't much to look at, but that doesn't matter. It's what's inside the building that counts.

On the outside, it just looks like some small storage building. The plain red bricks and few windows don’t exactly shout out “Welcome!” to whomever passes by.

Step in through the garage door, though, and you’ll find something that might surprise you – hundreds of bicycles, just waiting to be taken home.

Frank Wheeler sits inside the shop of Lansing’s Kids Repair Program working on an old bike that was dropped off at the police station just a few days earlier. He’s been retired for a few years now, but that doesn’t stop him from coming in and volunteering whenever he’s got the chance.

“I’ve been retired for a while,” Wheeler said. “I’d rather be doing this than sitting at home all day.”

The Kids Repair Program is a 501c3, non-profit organization that offers classes on bike repair to students ranging from nine to 17 years old. Camps run from Monday through Friday every week throughout the summer, with some classes available during the colder months, too. Volunteer and board member Frank Wheeler works with a wheel truer in the shop. Many of the tools have been donated or paid for through grants.

But bike repair isn’t all the kids learn. In addition to learning how to fix their bike whenever a part falls out or breaks, they also learn safety, responsibility, and self-esteem.

“If you read it on our mission statement, it says ‘build self-esteem,’” Wheeler said. “A lot of these kids never had much self-esteem to begin with. There are a lot of them from poor families, divorced parents … there were even a few who were foster children.”

The students come in from all different kinds of backgrounds, but by the end of the course, their spirits are reinvigorated and their confidence levels are soaring. Wheeler says that there is definitely a noticeable difference between the beginning and end of the course.

“There was this one kid, and he just had an attitude,” Wheeler said. “I brought him in here one day and sat him down and I said ‘You’re staying there until your mom comes to get you.’ And the next day, he came in and it was like he had a total attitude adjustment. He ended up being one of the best in the class.”

“Another kid came in here and took the class and started making money fixing all the neighbors’ bikes,” Wheeler added. “They kind of enjoy this thing. Self-esteem is the big thing.”

Reed W. Larson, professor of Human Development and Family Studies, Psychology, and Educational Psychology at the University of Illinois, Urbana-Champaign, says that youth programs are an important part in the lives of youths.

“They have been described as ‘sanctuaries’ and ‘safe havens’ that provide teens alternate spaces,” Larson said. “Similarly, they’ve been seen as intermediate transitional settings between the worlds of adolescence and adulthood.”

The different rooms of the shop are filled with bikes ranging from ones with training wheels to three-wheelers with baskets on the back to regular, old mountain bikes. The inside of the Kids Repair Program is filled with newly repaired and ‘waiting-to-be-repaired’ bikes of all shapes and sizes. Prices for the bikes are usually listed at half of what they could be at major retail stores.

Dave Meade, another volunteer and board member, says that many of the bikes just end up dropped off at the police station. The officers then bring the bikes over to the guys at the Kids Repair Program, knowing that they’ll be in good hands.

“The officers usually just bring them over and drop them off outside our door,” Meade said. “It might not be what they’re supposed to do according to the law, but they’d rather bring them here than impound them and have them sit there and rust.”

Wheeler pointed out one bike that was dropped off just a few days prior. It’s just a silver mountain bike with “Scott” slapped on the side. It wasn’t in terrible shape, either.

“We just looked that one up the other day,” said Steve Readette, Shop Manager for the Kids Repair Program. “It’s worth around $5,000 brand new.”

And it was just dropped off at the police station like a piece of junk.

“If it can’t be fixed, it’ll be donated,” Readette added.

The Kids Repair Program came from humble beginnings. In 1995, Curt Eure, known to his friends and coworkers as “Grandad,” kept noticing that the kids who lived in his neighborhood would have bikes one day and would be walking the next. After doing some investigating, he discovered that there was a big problem with theft. If one kid’s bike broke, he’d go steal one, and when that one broke, he’d go steal another.

Grandad decided to knock out two birds with one stone by teaching the kids responsibility through bike ownership. He began the program using his own money, but over time he was overwhelmed with support from different organizations and groups.

Every kid who took the class could walk in on a Monday, watch a few training videos and tutorials, get hands-on experience with their bike, and by Friday, walk out with a fully repaired bike, bike lock and helmet.

“The kids basically pull the bike completely apart and put it all back together again,” Wheeler said.

A rental space was secured after donations from the Lansing Police Department and a grant from the Mayor’s Office. After a few years there, however, funding was not renewed and the space was lost.

Grandad didn’t give up, though. In 1998, the Kids Repair Program was able to move to the Impression 5 Science Center, and after constant growth and popularity, the program was forced to find a bigger space.

In 2005, the program moved to the Hill Center Academy, thanks to the Lansing School District and GM Volunteers. The Kids Repair Program has called that building ‘home’ ever since. Curt “Grandad” Eure (right) is the founder of the Kids Repair Program. Although Grandad passed away a few years ago, his legacy still lives on through the program.

Denise Montgomery, founder of CultureThrive, an organization that works with national, state and local youth development programs, says that these types of programs extend far past pride and self-esteem.

“Throughout the United States, teen participants in creative youth development programs assert that the programs saved their lives,” Montgomery said. “They put them on positive trajectories away from gangs, drug use and crime.”

Curt “Grandad” Eure passed away a few years ago at the age of 87, but volunteers within the Kids Repair Program refused to let his work go with him.

“We’re starting to get a lot more well-known,” Wheeler says. “I did an interview with Channel 10 about three months ago, and they ran it on all their stations. We did a radio spot that’s still up there. We’re getting some publicity.”

Being a non-profit organization, many of the tools and supplies that are needed come from donations and grants. Wheeler pointed out a couple of boxes with dozens of wheel spokes.

“One guy was going on vacation and brought these in for us,” Wheeler said. “We organized them the other day and now they’re all ready to go.”

There are also walls filled with every type of tool one could possibly need when fixing up an old, decrepit bike. Whether they were purchased through grants or donated, they’re all going to good use. This bike, hanging above a desk scattered with tools, was made so that it could be used by Olympic athletes during the 1980 Olympic Games. Wheeler says that the bike was donated a few years ago, the donator probably not having any clue about its importance.

Wheeler said that if it weren’t for Jeanne Pearl-Wright, director of the Kids Repair Program, the ship would have sunken years ago.

“If Grandad would’ve kept keeping track of the funding, this place would’ve gone out a while ago,” Wheeler said. “Jeanne has really done a great job. If it weren’t for her, we wouldn’t be here right now.”

The Kids Repair Program offers open work shop night every Wednesday for adults over the age of 18. Most of the time, participation is usually affected by the weather.

“Tonight it’s kind of slow because it was raining earlier,” Wheeler said, looking out the window and the scattered puddles in the parking lot. “Once we get to those days where it’s 80 and 90 degrees, though, there will be a ton of people in here.”

Sign-up for summer classes begins in just a couple of weeks, and Wheeler says that he’s looking forward to working with the kids once again.