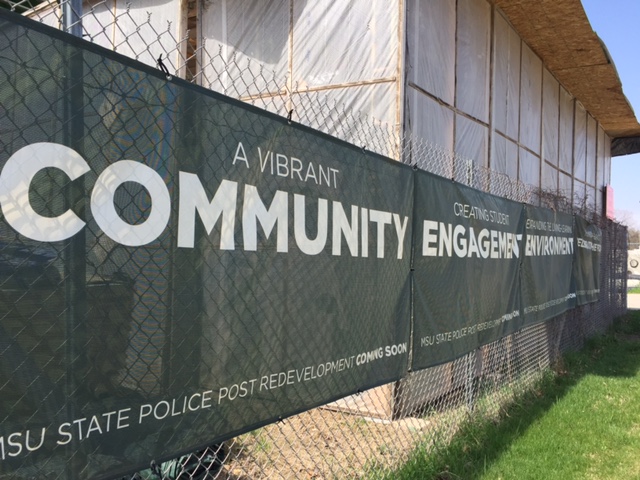 Lansing is best known for being the capital of Michigan, but, it’s also the location for numerous businesses and companies. But for many it seems as though the city is not their home, opting for longer commutes to work as opposed to living in the city.

A majority of the restaurants and bars in the area close before dinner time only offering regular hours for late night food and drink during the weekend. Smaller niche businesses pepper the city and keep consistent crowds and regular customers at night while the Lansing Lugnuts provide mid to late day entertainment, but neither has been enough to revitalize the city.

“We need a vibrant, walkable urban area that is cool and attractive to all walks of life,” said Scott Gillespie, president of Gillespie Company. “Especially those recent grads and those people that are coming here from out of state.”

Gillespie and his brother Pat Gillespie, also a president of Gillespie Group, have been buying up real estate all over the Lansing area and re-envisioning it. With around 51-plus commercial and residential spaces between the two organizations, Lansing is becoming a much more attractive city to live in.

Both brothers are building various apartment buildings and retail locations that offer a wide price range with appealing potential to the community. The new layout and designs of the residential complexes being built by both brothers come from a concept called “smart growth.”

The idea for these condensed, equitable, and sustainable smart growth communities began in the 1970s but didn’t pick up until 2002 when an organization called Smart Growth America was founded. It’s an organization that is dedicated to the ideals of smart growth and leads a coalition of national and regional organizations in hopes of re-creating towns and cities that can last in a competitive 21st century economy.

The city of Lansing got a late jump on the community development trend but in 2012 construction of the first complexes finished.

“We built our first building and finished it in 2012, that’s when the visioning started,” said Scott Gillespie.

The average age in Lansing is around 31, and much of the community is beginning to see younger residents as they move in from the surrounding college towns like Michigan State University and Central Michigan University. However, the market isn’t limited, according to Scott Gillespie it’s bigger than just the younger crowd. People need places to go for good food and drink, they need high-speed internet, and they need the amenities work best for them.

According to Scott Gillespie part of the process for developing these neighborhoods is cooperating and communicating with the communities, directly working with local leaders and holding open meetings for residents to join in the conversation. Through a series of smaller meetings and one large community forum, of about 120 people, Gillespie Co. collaborated and designed all of their buildings based off of the feedback they received. Even if the area’s residents are on board, it takes a lot more to jumpstart smart growth development plans said Timothy Furey, a community leader who’s town attempted a similar project. Logistically speaking there are only a handful of ways to obtain the funding other than a company fronting the money. Either the government will grant loans, which would then make the complexes workforce housing, or incremental tax funding can be instated. This form of taxes is a self-investment by the district which ultimately increases taxes in the hopes of having to pay less in the future, due to the increased additional revenue from other sources that were built during the revitalization.

“The problem is lining up the finances, or getting banks to agree to loans,” said Furey. “It’s really about the cooperation with people in the area, and getting more and more people to invest.”

Furey is a prominent community leader from Bristol, Conn. who was heavily involved in a revitalization plan for his town. Ultimately the plan fell through because residents in the area were against the low-income housing option and not enough companies or banks thought the market would be worth the investments.

Both Gillespie and Furey said that older cities and towns which adhere to strict residential building codes, like Bristol and Lansing, struggle to revitalize land due to restrictions against converting residential buildings into to commercial spaces. Areas that don’t build strictly residential structures find it much easier to re-envision and rebuild. Which is something that has been a problem for the east side.

“The difficulty we have on the east side of Michigan Avenue is that it was originally built as residential,” said Scott Gillespie. “Because of the small lot sizes, it makes it difficult to build something large. So it’s going to take some time, but as far as the market goes, it can handle it.”

The principles of supply and demand have proven to be true for the east side, as new restaurants and shops continue to thrive, said Scott Gillespie. Within a two-block radius of the newest smart growth compound, there will be four bar restaurants accompanied by smaller market retail facilities.

As the gentrification of downtown continues so does the success of places like Strange Matter Coffee which is now opening a second location and moving to a bigger space in the Michigan Avenue Corridor where they will be adding a bakery to their arsenal.

“We were really looking to expand, but we didn’t want to leave the east side, so it gave us an opportunity to move into a new development that could be exactly what we needed, said Cara Nader owner of Strange Matter Coffee. “But, it also gives us a built-in customer base which is super awesome, and I think really great for the neighborhood.”

Similar to the businesses residents like Kelly Farhat and her husband certainly enjoy the location of their home.

The general population is content with their new homes and excited to see more rise-up. The demand for affordable yet high-class living is growing, and there is more to come over the next few years. Scott Gillespie made sure to hint that there are a few surprises to come leaving the rest of us to wonder what he and the other developers have in store.