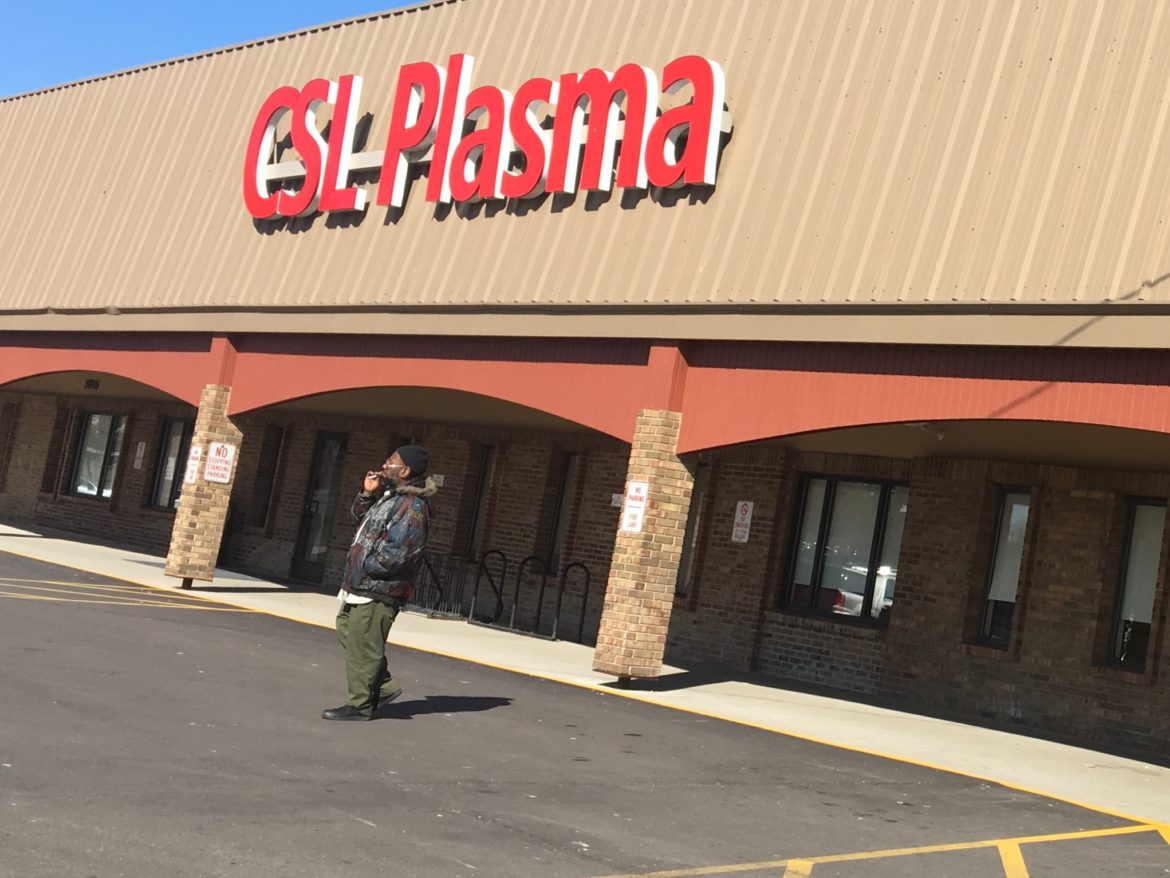 CSL Plasma, located at Jolly Cedar Square in Lansing, has become a popular spot for college students to pick up extra cash. Photo by Austin Short CSL Plasma, located at Jolly Cedar Square in Lansing, has become a popular spot for college students to pick up extra cash. Photo by Austin Short

Conor Goggin was at a crossroad. The weekend was quickly approaching and his roommates were arranging their plans, but Goggin’s bank account was lacking funds. He needed to find a quick way to supplement his other source of income. That’s when his roommate suggested he donate plasma.

“My roommate Layton had done it because his brother used to do it when he went to Michigan State,” Goggin said, who consistently donated at CSL Plasma in Lansing for a year and a half.

According to the American Red Cross, 10,000 units of plasma are needed daily in the U.S. It is obvious that all of this is for a good cause, helping those in need. In the minds of most donors, it’s not about helping people out but about the monetary reward for giving.

During their time living together Layton Korson, Conor Goggin and Clayton Wolin became blood brothers. All of them donated enough times to reap the benefits of the extra cash given to new donors.

“They offered a lot more payout the first three times so

meone went, so I figured I would donate three times for a couple hundred bucks and never go back,” said Korson. “I didn’t think the regular compensation was worth the effort though.”

Goggin and Wolin both continued the practice for over a year.  They traveled across town to allow the plasma donation facility to harvest the valuable pale-yellow liquid out of their veins.

“You could go twice a week and it was about $60 a week if you went both times,” said Wolin. “I thought the pay was good for the effort I was putting in.”

According to the American Red Cross plasma makes up 55 percent of human blood, making it the largest component of blood. Plasma is mainly water, but also consists of salts, enzymes, antibodies and other proteins. Plasma’s greatest contributions to the body includes clotting blood, fighting diseases and other critical functions.

“I think in the moment when I was sitting there and I saw the bag of plasma I thought about how I was helping people out,” said Goggin. “But outside of the clinic I wouldn’t be thinking of the people I helped. I would be thinking about the money I’m about to spend.”

This was a common theme for most student donors. Although they were aware of the good they were doing, the cash incentive was the real driving factor behind their reason to donate.

“I would like to say I donated to help people, but I probably wouldn’t have done it, if it was unpaid. So I guess I donated for the extra money for the weekends,” Wolin said.

Korson agreed. “I remember thinking to myself this must be pretty useful to donate because they’re paying a pretty good amount of money out to get all of this plasma.”

The process of donating plasma offers a solid payout for little work, leading the people who are most desperate for cash to lie throughout the screening process. This poses a potential problem to those receiving the plasma and those giving.

“I started donating spring break of my senior year. I remember this vividly because you’re not supposed to donate if you had surgery recently,” Adam Fethke said, who donated at Biolife in Grand Rapids starting in 2014 before stopping last year. “But I went after I had my wisdom teeth pulled out and during the screening they asked if I had surgery recently. I, of course, lied and said I hadn’t. It looked like they noticed the scarring in my mouth but they didn’t care enough for them to stop me from donating.”

People who are really in a pinch can also try to get around the minimum weight requirement by wearing layers of clothes, hiding tattoos, or lie throughout the screening process.

“No I did not (lie), but it seemed like it would be easy enough for anyone to lie through it.” Korson said, who stopped donating in 2015.

At the end of the day, all of the donors mainly cited financial reasons as their biggest motive. Whether it was paying rent, other bills, gas money or money for extracurricular activities.

“Nights where I knew I was going out I would definitely go give plasma. Which seems like a terrible idea in hindsight, but you got drunk a little easier,” Goggin said with a laugh.