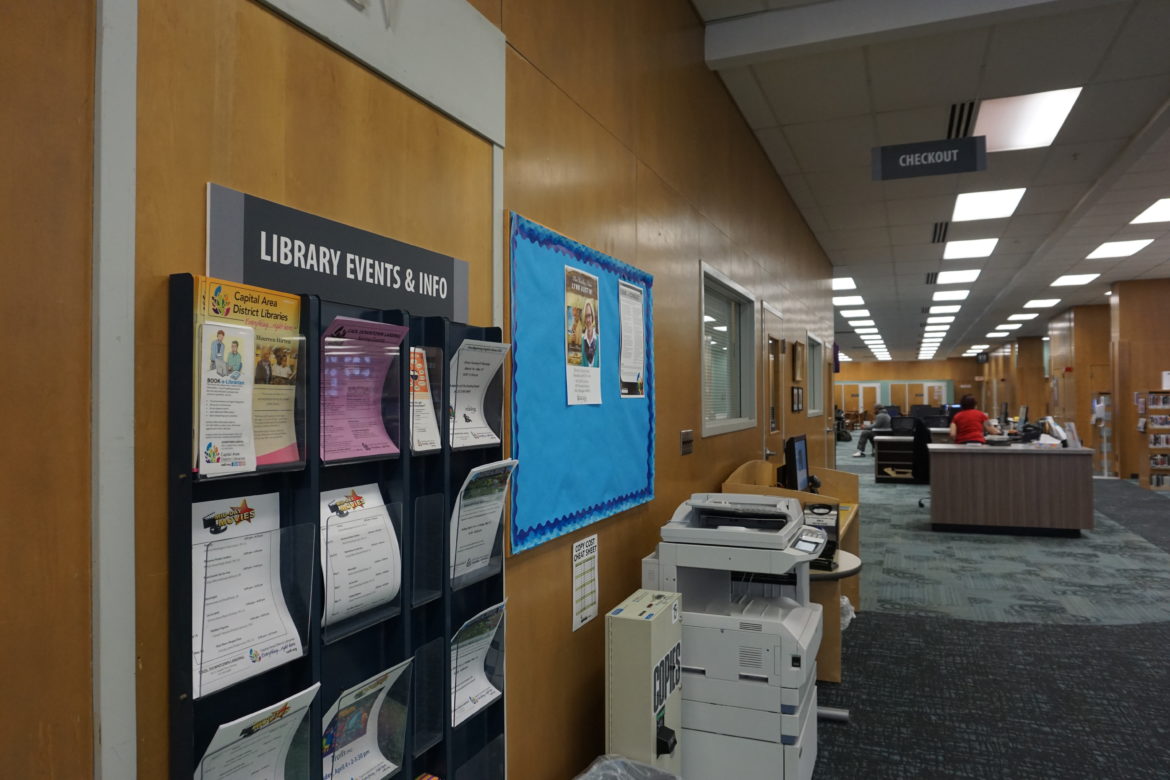 A wall of event information at the CADL Downtown branch. Photo by Lukas Eddy

The Capital Area District Libraries (CADL) host an average of 72 programs each week across all 13 of their branches, according to Executive Director Maureen Hirten. This averages out to 12 per day, almost one at each individual branch Monday through Saturday, because programs typically aren’t held on Sundays.

Hosting 12 programs per day across the entire system is well above the national average.

According to the Institute of Museum and Library Services (IMLS), in 2010 the average amount of programs in each library system in the U.S. was at least one per day, meaning the CADL system has almost 12 times as many daily programs as the 2010 national average.

These are an average from all the branches, so Hirten says that the larger branches like Okemos and Haslett do a lot of events while the smaller branches do fewer events roughly two or three times a week. A wall of event information at the CADL Downtown branch. Photo by Lukas Eddy

Public libraries in the U.S. have seen a steady increase in community involvement programming since the 1950s, according to the Digital Public Library of America (DLPA). Hirten says programs that involve the community are a significant part of a public library system.

The CADL officially became a unified public library system in 1998 after the 1997 decision to merge the Ingham County Libraries and the Lansing Public Libraries. All 13 branches opened in January of 1998, so despite the comparably young age of the system, it has been functioning well as far as events go. Still, according to Hirten, there have been periods of more and fewer events.

“Sometimes it’s waxed and waned, there have been periods of time we’ve done fewer, but at one point we were doing so many we had to cut back,” Hirten says. “It’s always been that way. Sometimes, depending on how much money you have, like during the downturn, we probably didn’t have bigger programs that cost money, like authors… It’s cyclical, but for the most part we are always doing programs.” The newly renovated CADL Downtown branch has been a welcome improvement. Photo by Lukas Eddy

Hirten says the programs are consistently tailored to fit the needs and wants of the community by analyzing what current interests are.

“Our staff is very creative … one of the ways you decide what you’re going to do, certainly with adults, is you look at the collection and see what’s circulating and what people are interested in the collection and try to have programs that will appeal to people that are taking out certain books.”

Another community involvement asset at the CADL is their Mobile Library, a technologically advanced library vehicle bringing books, magazines, movies, music, wireless service and trained staff to the community. The locations of the CADL branches. Mapping by Google Maps. Graphic by Lukas Eddy

Despite the overall effectiveness of the programming at CADL, there are challenges in running and maintaining these programs. Hirten says the challenges are generally found in situations where a factor is beyond their control.

“The challenges are sometimes a speaker or programmer doesn’t show up…, the weather, if it’s a terrible snow storm the day you have this program you’re anticipating and nobody comes…, also getting the people you want, scheduling them they way you want,” Hirten says. “It’s simple stuff, it’s not big stuff.”

According to the DPLA and IMLS, public libraries and library programs have still been doing well despite funding challenges over the last decades. Fortunately, public support continues to help sustain an effective network of public libraries.

There are many important factors that go into providing library services for the community, and besides providing resources like books, movies, music, internet and databases, the staff are what help provide cohesion for the libraries.

“You can’t discount the fact that we have trained staff that can help people navigate the services,” Hirten says. “We have a lot of databases, we have things that people find very useful for work and for learning languages and all of these things and the trained staff is a key part of all of our services – without them it just wouldn’t work.”