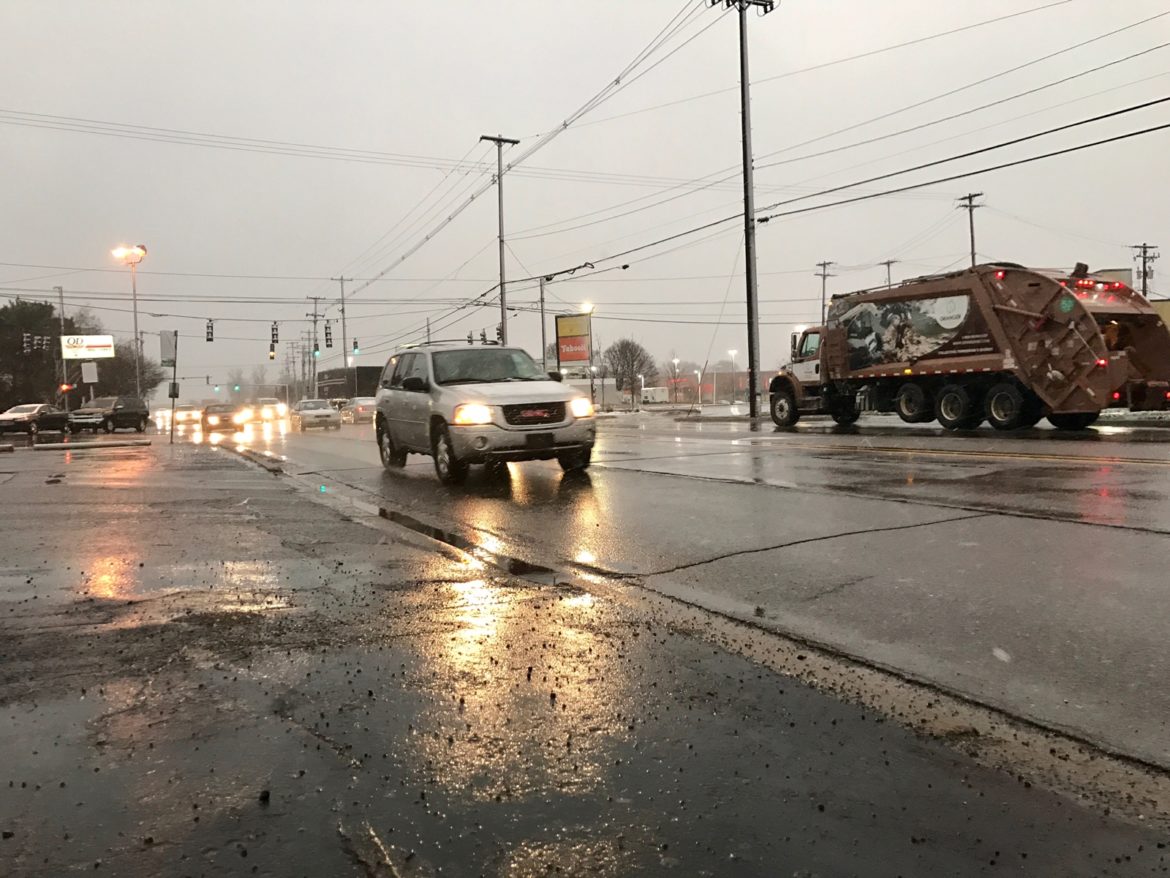 A car drives down South Waverly Road past a busy intersection located in Lansing Township. Photo by Hannah Holliday.

With the further advancement of technology, drivers behind the wheel are now more distracted than ever and even in the small community of Lansing Charter Township, accidents happen. A car drives down South Waverly Road past a busy intersection located in Lansing Township. Photo by Hannah Holliday.

According to the Lansing Township’s Citizens Guide and Performance Dashboard, in 2014, there was a total of 469 non-injury crashes, 128 injury crashes and zero fatal crashes.

However, Lansing Township Supervisor Diontrae Hayes said township roads for the most part don’t see a lot of hazardous driving.

“In the Lansing area I haven’t seen much of that,” Hayes said in regards to crazy driving. “We do have accidents like every other place but I can’t say with certainty that consistently on x amount of roads here, there are people speeding or driving reckless. I just haven’t witnessed that.”

According to Hayes, the township helps direct residents to other organizations when it comes to driver’s safety.

“So we don’t have any direct involvement with driver’s safety, however when people come in we have driving guides for those who are looking to obtain driver’s licenses,” Hayes said. “Any other resources outside of what we would provide in the pamphlet form, they would be directed to other organizations so we don’t partner or collaborate with anyone in terms of driver’s safety.”

Hayes says that the township handles things differently when it comes to state initiatives.

“Like the no texting and driving campaign, when you have things like that that are rolled out at the state level, then you’ll have all the municipalities a lot of times they comply to kind of help in that regard,” Hayes said. “It’s informational information that goes out.”

Accidents can tell a lot about a community and not just the driving performances of its residents.

According to the munetrix.com, which is the site that displays the Lansing community statistics, “Traffic Crashes are one measure used in studying the overall safety of a community, and also provide a way to understand how well public safety and road maintenance costs can impact a community.”

One element that may be aiding in keeping driving accident fatalities and injuries low is awareness. The Lansing Area Safety Council (LASC) focuses on promoting all types of safety including traffic safety in Mid and West Michigan. They provide various programs like their Defensive Driving Courses and Road Testing for new drivers.

Suzy Carter who is the Executive director of the Lansing Area Safety Council said Lansing Township is one area that they specifically support. In terms of enrollment for their defensive driving classes, the council can determine what city attendees are from but not if they directly live in the township. Residents from these two areas may have to deal with two very different types of traffic.

Clarence Woudsma who is an Associate Professor of planning at the University of Waterloo explains how generally in a small community the traffic pressures are less and the potential for traffic accidents would be slightly lower.

“If it’s a small community like that then chances are it might have a main street, be a little bit busier, but not like downtown Detroit,” Woudsma said. “Researchers look at traffic accidents and they look at the rate of traffic accidents. They definitely find out that if you think about how far people drive and if you drive in busier conditions, in busier cities, then chances are the accident rate is going to be higher than if you drive in a small town just because of the volume of vehicles and the complexity of road network and other things.”

The separation of the township can cause a change in traffic frequency between different sections because of the higher volume of people and vehicles, Woudsma said.

“Just because of the fact that you have a higher volume of vehicles, so you have more potential for accidents just simply by the fact that it’s busier,” Woudsma said. “Now the counter argument is that usually in busier areas though the traffic tends to move slower right. So if you have a higher volume of traffic you might note see people driving 50 mph because there’s no cars on the road, things might slow down a little bit and so that might counteract this sort of business and more accidents idea.

“But, ultimately what shows up is that you have less severe accidents, so you don’t have like serious collisions that lead to injury and death, but lots of fender benders.”