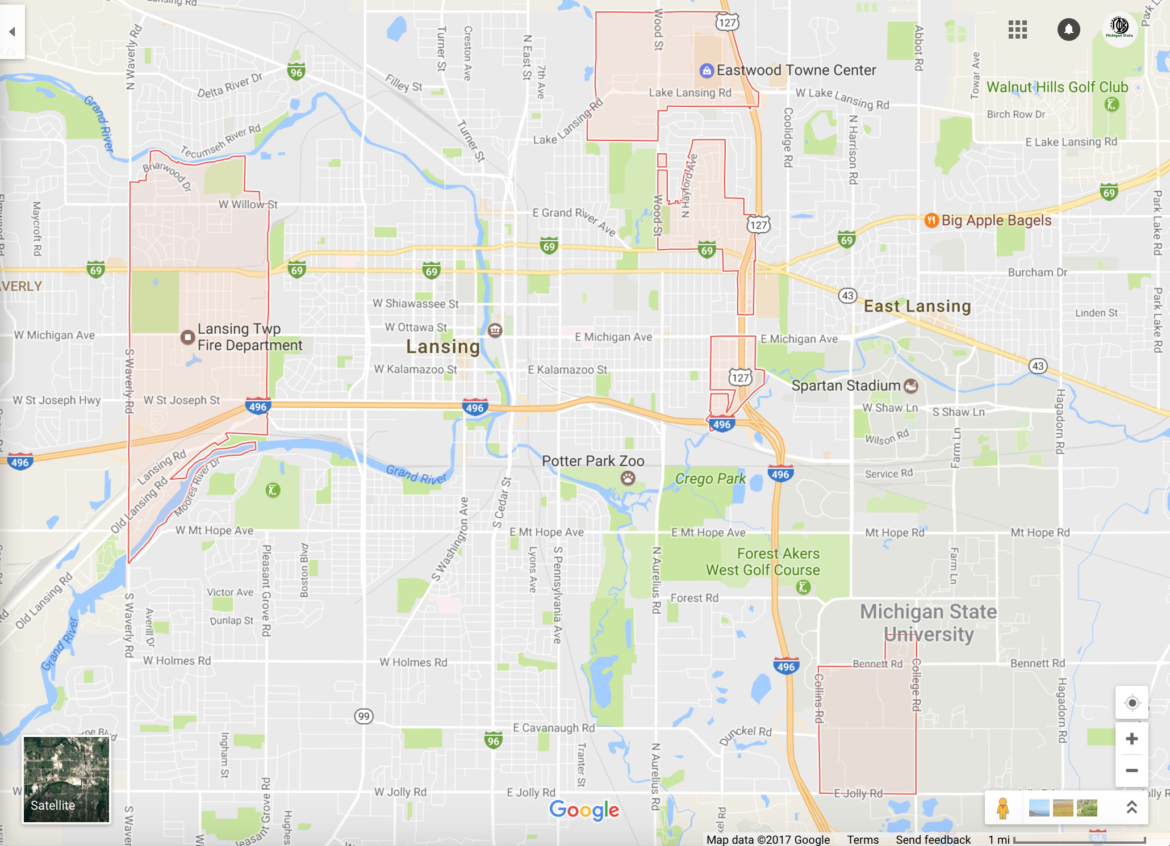 The west side, southeast side and east side sections of Lansing Township. Source: Hannah Holliday via: Google Maps. Spud’s Family Restaurant located in Lansing Township is one business located on the West side of the township. Photo by Hannah Holliday.

But, not even an endless amount of hours spent at the shopping center could prepare Daniels for this geography question.

When asked where the shopping mall was located, Daniels replied with, “I guess maybe it is considered to be in Lansing.”

Unbeknownst to some visitors, store employees and even residents from neighboring townships, Daniels is not alone with being confused about where Eastwood is located.

Technically, the lifestyle center is located within the boundaries of Lansing Township, according to the Charter Township of Lansing’s website, and not the City of Lansing.

“I have never thought about it actually,” Daniels said. “I’m not surprised though. It is like Meridian Township; it covers a wide area.”

According to the township’s website, “Because of the Township’s irregular shape, it has several borders.”

These borders essentially split the township into five separate sections — all located in three different directions — with the largest section of the township being on the west side of the Greater Lansing area, one section is on the southeast side of the region and three on the east side, according to the Charter Township of Lansing’s zoning maps. The west side, southeast side and east side sections of Lansing Township. Source: Hannah Holliday via: Google Maps.

This can make it difficult for consumers and visitors to the area to know if they are standing on ground owned by the City of Lansing or the township.

J. Crew is one store located in Eastwood Towne Center.

According to J.Crew’s manager, Brenna Green, the employees she works with probably don’t know that Eastwood Towne Center technically is located.

“Our address is technically Lansing,” Green said. “I’m sure customers know that live around here, but a lot of our employees are students. So in their minds we probably are in East Lansing; we probably aren’t even in Lansing to them.”

Green feels that the ambiguity of some consumers not knowing the different zip codes of Lansing and Lansing Township isn’t enough to stop their shopping experiences.

“I think people shop differently based on what’s available to them,” Green said. “We are like the more upscale mall around here and I think that’s what brings people to us not that were Lansing Township.”

Charter townships that are broken up like Lansing Township seem to be restricted to the State of Michigan, Dr. John Mercer, a Maxwell School of Syracuse University professor emeritus of geography with a specialty in urban geography, said. These townships located within Michigan are also non-contiguous, which is different from many of the states that Mercer has lived in which townships are contiguous.

“The unusual spatial arrangement could well be confusing to consumers moving around a metropolitan area like Lansing, but perhaps less so in smaller urban centers in Michigan if this non-continuality exists locally,” Mercer said. “Long term residents and consumers presumably would be less likely confused compared to newcomers, but that would depend on their mobility and or commuting and purchasing patterns.”

For many consumers like Daniels, the division between the City of Lansing and the township does not matter. “As a consumer I like to support all businesses in the Greater Lansing area,” Daniels said.

From a governmental point of view, the township receives no specific cases of confusion in regards to the way the township is sectioned, according to the township Supervisor, Diontrae Hayes.

“I’m sure there are times when I’m going to fill out a permit and someone gets confused between the township and city,” Hayes said. “There is certainly not confusion for long time residents, but people new to the area who just need some clarity.”

Sitting in Spuds diner, a local Lansing Township hangout, 52-year-old Lansing resident Michael Blackburn thinks that consumers probably don’t have any clue that they are in Lansing Township when they shop at Eastwood. He believes that more clarification is needed in defining these borders.