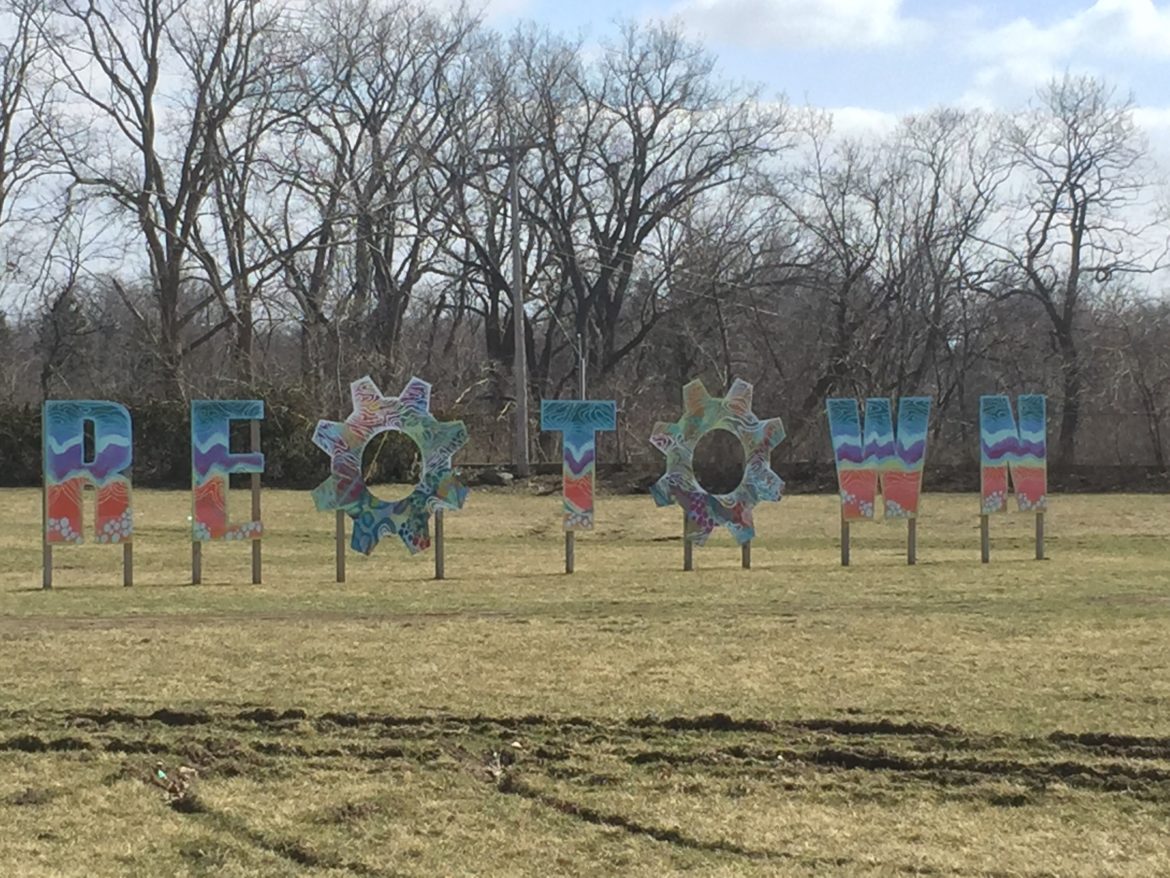 Dylan Rogers is a resident of Lansing and lives close to REO Town and remembers the town in the ’80s and ’90s; boarded-up buildings and nothing going on. Since then, Rogers said he has seen a lot of change.

Rogers, who is the owner of The Robin Theatre in REO Town, said that there was a general consensus that it was not a safe place to linger after the REO Motor Car Company went away. However, Rogers said that even in the last 2-3 years, they are excited to have owner occupied small businesses filling up the buildings. Trash can in the commercial district of REO Town. The design shows the manufacturing history of the town. Photo by Emily Lovasz.

There is still a presence of the Motor Car Company such as the gears in the REO Town sign on South Washington Avenue and East Malcom X Street, or on the trashcans. However, the town has since turned from a manufacturing center to one that promotes creativity and culture.

Ariniko O’Meara, owner of AA Creative Corridor in REO Town said that over the last 10 years, there has been a core group of people who have been really dedicated to promote arts, culture and community.

“It (REO Town) has a really nice positive energy going; I’d like to just see that continue and not have gentrification take over and raise the cost of being down there to such a level that people start to move out into different areas,” O’Meara said.

REO Town is named after Ransom Eli Olds and is known as the birthplace of the commercial automobile. Olds started a car company in the area, REO Motor Car Company. While it is not there anymore, the area is still known for being the manufacturing center for the automobiles.

Professor at University of Guelph and expert in economic development Thanasis Stengos said that manufacturing was the main engine of economic prosperity, but currently this is not the case, mainly because of automation and technological advances.

“The economy of the small town operates within the same principles as the overall economy. In that regard the economy works well if it can produce things that not only people in that community want to buy but also others from outside,” Stengos said.

One of the groups that have helped create this post-industrial community is the REO Town Commercial Association, which was established in 2001. The association is made up of 13 business owners and residents that represent the community as a whole.

Executive director of the REO Town Commercial Association and manager of Elm Street Recording said that the town has a committed group of neighbors and business owners who devote their time to making it a better place to live and work.

“At the same time, the increase in the 9-5 workforce in the area as a result of the Board of Water and Light and Cinnaire moving into the neighborhood has helped provide a regular customer base to keep a lot of our retail and restaurant space viable,” Wert said.

Wert also said that the festivals and special events are all ideas that members of the community came up with and were able to execute.

AA Creative Corridor is one of the local businesses that participate in events such as Arts Night Out and Be a Tourist in Your Own Town. O’Meara said that the open space venue is a place for people can host events and parties, but also has weekly dance groups including blues, salsa and swing dancing. Some of the businesses in the commercial district of REO Town. Photo by Emily Lovasz.

Other small businesses that have filled up the block of the commercial corridor include Good Truckin’ Diner, Thriftique, Saddleback BBQ and Vintage Junkies.

The Robin Theatre is a listening room and space for community performers that has also contributed to the tight knit community The theatre offers bluegrass, rhythm and blues, and jazz music, as well as comedy, theatre and local film.

“Having a dedicated performing arts space in the neighborhood that also has a community and community empowerment to it as well has really helped the neighborhood really establish itself as an arts and culture center in Lansing,” Rogers said. “That has definitely been bolstered by our other fantastic local business owners.”

Wert said that the main block is completely full (or spoken for) and the blocks north and south are starting to fill up as well. In the next year, there will be a coffee shop, a second bar and a brewery opening as well.

“One of our big concerns is the speed with which the district has grown over the last several years,” Wert said. “It’s awesome to see the fruits of all of our labors come to fruition, but our organization has had to grow much more quickly than we expected and keeping sight of what makes REO Town, REO Town is something we work hard to do.” The commercial district of REO Town is located south of downtown Lansing between Elm Street and South Street. Map by Google Maps. Graphic by Emily Lovasz.