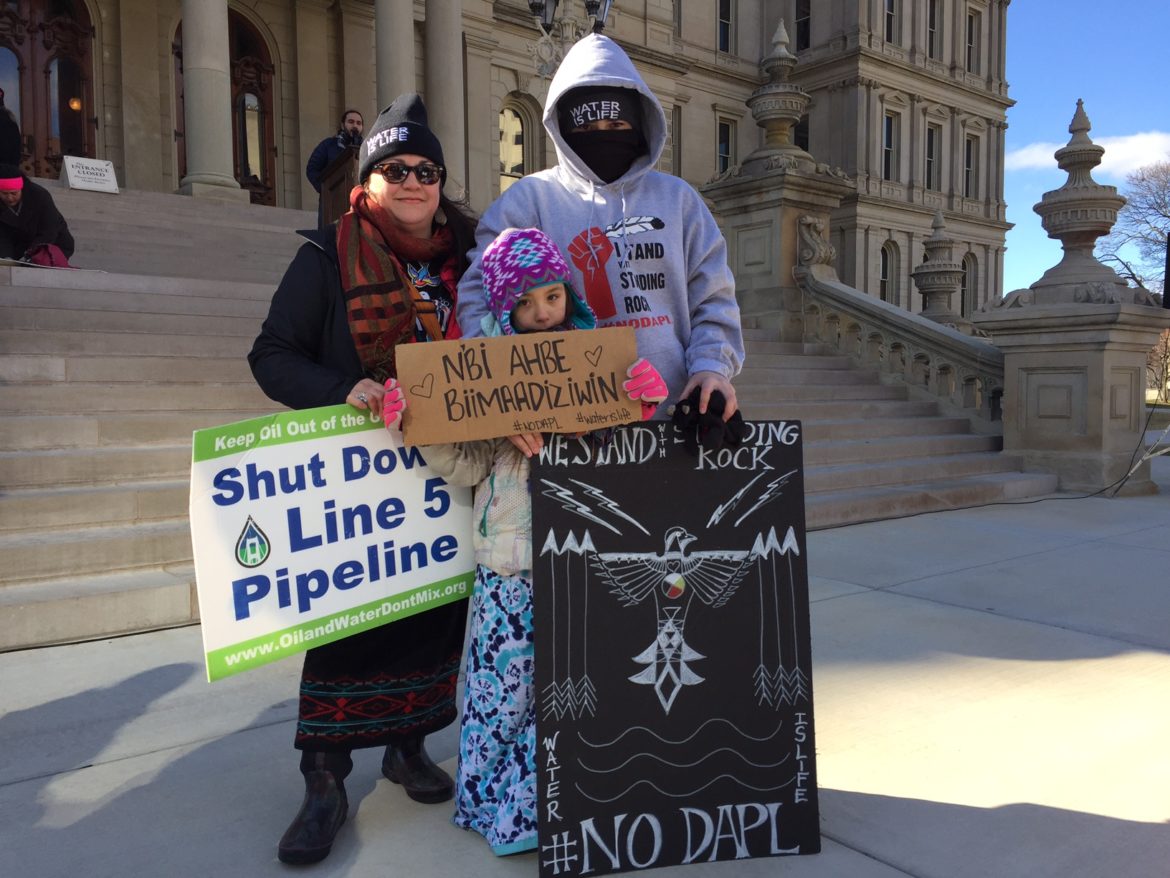 A family stands united against line 5 and DAPL Local Politician speaks in front of crowd on behalf of the pipeline issue.

On Friday, March 10 protestors in downtown Lansing marched on the state capital in support of the Washington D.C. rally by the Standing Rock Sioux tribe and their allies. The nation-wide demonstration was conducted to raise awareness to the on-going battle against the Dakota Access Pipeline (DAPL), said to cross over sacred burial grounds belonging to the Standing Rock Sioux tribe. Native Americans and environmentalists have also stressed their concern over the effect the pipeline will have on their drinking water and the surrounding lands.

“Mni, wiconi. Water is life.” That was the message carried throughout every speech and ceremony on Friday’s protest. Men, women, and children alike gathered on the steps of the capitol building to fight for the simple request of clean drinking water for any and all people. Taking the title of “water protectors,” these citizens walked together in unity on behalf of the water that is being claimed and polluted by corporations. A family stands united against line 5 and DAPL

“The water protectors are anyone of any direction, north, south, east or west. Of any race, even the star nation,” said Beatrice Menase Kwe Jackson, Elder of the 3 Fires Midewiwin Lodge and a member of the Tlinglet Tribe. “Anyone who loves water, who loves life, and can do anything no matter how small for the water.”

Jackson stressed the importance of not just the fight against the DAPL, but against situations like that of the Flint water crisis and line 5, another oil pipeline, in the upper peninsula. If people like the water protectors don’t continue to step up and make their voices heard she fears that future generations won’t be able to live off the water that we have today. Water Protectors shielding themselves from the frigid winds during the 3 hour demonstration.

“It’s not just a Native American issue anymore, it’s all of our issues,” stated Daví Trusty member of the Tsalagi Tribe. This has been an issue that hits close to home for many, especially those here in Michigan, such is true for Trusty as the ceremony brought tears to his eyes.

Over the past year, the fight for clean water has turned from a bipartisan political issue to a fundamental matter of human rights. Fortunately, there weren’t any problems at the march in Lansing, but Jackson and Trusty have allegedly faced the likes of tear gas, water hoses from fire trucks, and riot police during peaceful prayer ceremonies. There has been more than one occasion where these forms of crowd control have been documented such as the Backwater Bridge where water cannons were used on protestors for hours in sub-zero weather. “Today was about being active and learning from Standing Rock, about water issues and pipelines,” said Becky Roy, co-event organizer. “It’s about taking that knowledge and bringing it to all our hometowns and getting involved locally, so for us, it’s all the Michigan water issues.”