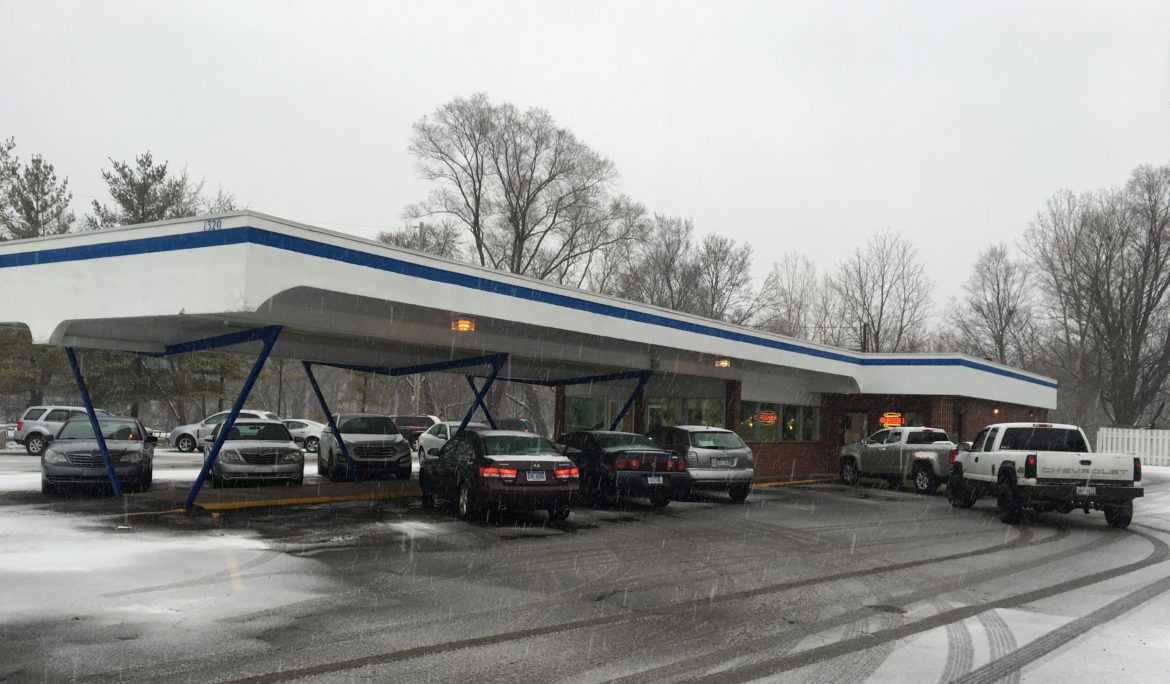 Cars fill the parking lot of Olympic Broil, no matter the time of day. The restaurant is open from 10:30 a.m. to 8:00 p.m. Monday through Saturday. It is closed on Sunday. Photo by Kaley Fech.

As he sits in his restaurant, Olympic Broil owner Mike Alexander interacts with almost every customer that walks through the door, and he knows many of them by name.

Like a typical boy growing up in Michigan in the 1960s, Alexander spent his summer days wandering down to the river with his friends to drop a fishing line in the water and hang out.

“One summer they were building the Dog n Suds,” Alexander said. “Being the young guys we were, my friend and I thought it was great to watch the welders work.”

At the time, Alexander had no idea he’d spend the majority of his life working in this very same place.

Originally a Dog n Suds in the 1960s, Mike’s father Jim Alexander acquired the property at 1320 N. Grand River Ave. in 1974, and reopened the restaurant under a new name, Olympic Broil.

“When my dad bought the land, we thought he was nuts,” Mike Alexander said. “The building had gone from a Dog n Suds to a diner to a Mexican restaurant, none of which lasted very long, before becoming a vacant lot. My brother and I used to commute to Michigan State University down this road (North Grand River Avenue) and we’d pass by the lot and we’d laugh at whatever poor sucker eventually bought it.” At its start, Olympic Broil struggled, and Jim Alexander wanted to sell the place. Mike Alexander, still in college at the time, wanted to try his hand at running the restaurant. His father wanted him to finish college, but he eventually convinced his father to let him give it a go.

For a while, business was slow. Mike Alexander worked for free for the first three years.

Brad Poulos, a professor at the Ted Rogers School of Management at Ryerson University as well as a consultant, said this is typical for many small businesses.

“Starting a business a lot of the time consists of entrepreneurs pulling themselves up by their own bootstraps,” Poulos said. “What I mean by that is the owners invest their life savings. They do the work themselves. They take pay cuts. They do what they have to do to make it work.”

Then, in 1978, Saturday Night Live aired its Olympia Cafe sketch starring John Belushi as Pete Dionasopolis. The skit portrayed a small restaurant run by Greeks. Patrons would attempt to order various items, only to be told they could only order a cheeseburger.

Mike Alexander used the popularity of the SNL sketch to his advantage; he created a cheeseburger special that became a huge success among customers.

“People are so sensitive these days,” Mike Alexander said. “I’m Greek, and yea, I found it racist. But I didn’t cry about it. I made it work for me. That’s what success is. You take something bad and make it good. We made it fun.”

Mike Alexander’s cheeseburger special consisted of a quarter pound cheeseburger, fries, and a drink, all for $1.49.

According to Mike Alexander, ads featuring the cheeseburger cheeseburger special and “Pete the Greek” increased business 500 percent, and its what put Olympic Broil on the map. Owner Mike Alexander, center, stands in front of the menu with his two sons. Photo by Kaley Fech.

In those days, Olympic Broil embodied the picture perfect place to grab a bite to eat and hang out.

“At that time, I was a young and handsome guy,” Mike Alexander said. “I hired a bunch of cheerleaders to come and work for me. It was a fun place to work and hang out, full of young, happy people just enjoying life. We all had less material wealth, but we were happy. Times were simpler then.”

Even in this modern era, Olympic Broil tries to capture some of the feeling from those days gone by. Today, a six piece chicken strip combo costs $6.49; the Olympic burger, which is a quarter pound cheeseburger topped with coney sauce, lettuce, and mayonnaise, along with fries and a drink, costs only $5.69.

In the summer months, the parking lot of Olympic Broil is often lined with classic cars.

This tradition began several decades ago; one early summer night, Mike Alexander was landscaping as the sun was beginning to set. He was running out of daylight but still had work to finish. Off in the distance, he heard a rumbling sound; soon enough, three men in muscle cars showed up, looking for a new place to hang out. They provided him light to finish his landscaping, he provided them a hangout spot, and thus, a friendship was born.

“The muscle cars would park and the guys would just hang out,” Mike Alexander said. “In those days, everything spread by word of mouth, and word spread fast. Cars took up all of the parking spots, they lined the streets, and when school got out for the summer, all of the high school kids started hanging out here too. It looked like a giant block party. It got so big that our neighbors started complaining to the cops.”

Eventually, Mike Alexander had to put an end to the gatherings, and was forced to hang chains across the driveway. Pictures of cars and their owners that have stopped at Olympic Broil through the years line a wall in the restaurant. Photo by Kaley Fech.

However, that didn’t last long. Towards the end of the summer, the muscle cars were replaced with classic cars, owned mostly by older gentlemen. It was a more tame scene, but it still attracted a lot of people, many of them connected to the Mid Michigan Street Rod Association.

“That following summer, we threw a huge party,” Mike Alexander said. “The only word to really describe it was ‘unbelievable’. The mayor allowed us to block off part of the street, we hired a band, TV stations showed up. Over 3,000 people came out.”

The tradition continued for many years, but eventually members of the Mid Michigan Street Rod Association reached their late 60s, and they began to tire. Cars were still welcome to hang out, but the huge party atmosphere disappeared.

“It’s like anything of this nature,” Mike Alexander said. “It was rekindled with new ideas and new people. It’s a cycle of growth and waning and back again.”

Last summer, over 150 cars showed up at Olympic Broil. Throughout the years, with changes in the economy as well as the fast food industry, Olympic Broil has managed to stay alive. Photo by Kaley Fech.

Since Olympic Broil’s early days, the economy has had its ups and downs, restaurants around the country have opened and gone under, and downtown areas like Old Town have been abandoned and revived. Through it all, Olympic Broil has managed to keep its doors open.

Considering that Poulos said only 30 percent of businesses make it to five years, this is an impressive accomplishment. Customers wait in line to order their food from Olympic Broil. Photo by Kaley Fech.

Poulos says Mike Alexander has pretty much hit the nail on the head.

“There are three big keys to success in the restaurant business,” Poulos said. “They are good food, friendly service, and good value. These are the things that make a restaurant experience enjoyable.”

At Olympic Broil, the quality of the food is an important factor.

“Everything is made from scratch,” Mike Alexander said. “We use top of the line beef for our burgers. Our chicken, fish, mushrooms, and onion rings are hand breaded fresh every single morning. We use only pure vegetable oil for frying. Quality makes a difference.”

“People know value,” Mike Alexander’s son, Theodore Alexander, said. “We’ve had a line around the building. We provide quick service; typically, you’ll get your food within five minutes of ordering. Our motto is ‘good food fast’.”

Another contributor to Olympic Broil’s success is the excellency of their customer service.

Theodore Alexander believes in the power of customer service.

“We treat them like people instead of just an order,” Theodore Alexander said. “Remember their names, their faces. Some people walk in and you already know what they’re going to order. People want that. People want to feel special. When people come here, they aren’t just coming for the food.”