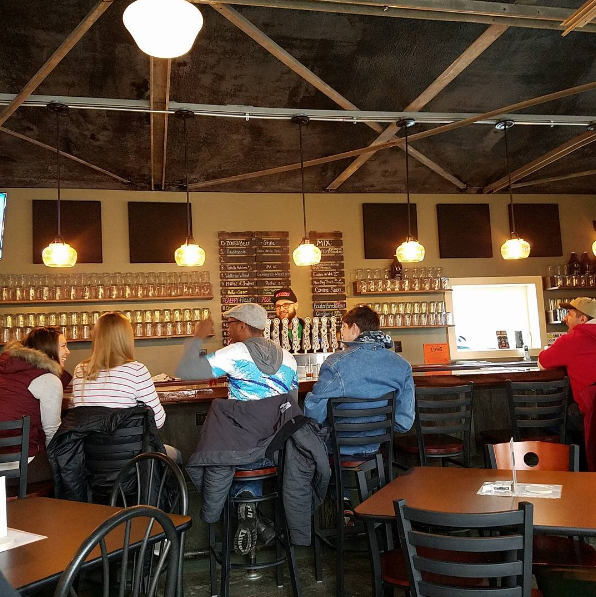 Ozone's Brewhouse has been very successful ever since it has arrived last Spring. Located on 305 Beaver St. Photo by Joshua chung Old Town Lansing is known for having its unique, distinctive, and personal type of businesses unlike the rest of Lansing. Photo by Joshua Chung

With new buildings coming into Old Town this past year, Old Town has expanded its borders to the biggest it has ever been. Although why are these businesses heading to Old Town to start?

One draw is that Old Town is known for being a very artistic and hipster type of town with many common coffee shops and young fashion-type of stores.

Recently, two new establishments have opened known as The Grid Arcade and Bar that includes an arcade inside a bar, which is something different than what Old Town has had in the past. Also opening was the Ozone’s Brewhouse that recently opened last spring, which is located on 305 Beaver St.

Being able to bring in shops such as these two has been very beneficial because you do not see many businesses that are like these around Greater Lansing. It is very different and it has been succeeding as well, allowing it to be so unique from the other businesses, according to Rick Preuss, Old Town Commercial Association Vice President. The Grid is ready to launch its grand opening soon, located on 226 E. Grand River Avenue. Photo courtesy by The Grid

“This is what Old Town is looking for and it is has been very interesting to see how this has played out so far,” said Preuss. “Businesses like this all around the country are amazing and have succeeded. For Old Town to have one here is pretty cool.”

Old Town Commercial Association board member Mike Bass loves the idea of The Grid. It is creating an economic boost and providing jobs for people, which is a goal that all the board members keep striving for.

“We want to be able to bridge the gap between Michigan State students and let them know that there is always cool stuff going on in Old Town outside of the university,” said Bass. “We want to encourage students to graduate and stay here as there is night life for everyone and stuff to do during the day that could appeal to them.”

Communities throughout Greater Lansing including Grand Ledge, Okemos, Holt and DeWitt presented an opportunity for The Grid. Old Town was able to present two opportunities that none of these other districts were able to provide, according to Corey Montie, co-owner of The Grid.

“Two opportunities were provided, the perfect building and the perfect location,” said Montie. “Old Town offered the overall theme and experience we want to create, along with the newest up-and-coming district that has a great mix of events and clientele.”

The board of Old Town does not actually bring in businesses; they help find businesses a location and landlord if there is an opening, according to Ariana Gibbs, Old Town Commercial Association Secretary.

The benefits for Old Town is by adding in businesses that are not part of a franchise; it brings in many customers who are looking for an item that cannot be found anywhere else, according to Gibbs.

A report was made that retail directly and indirectly supports 42 million jobs, which provide $1.6 trillion in labor income and contributes $2.6 trillion annually to to United States gross domestic product. The report also makes clear that retail is American small business, according to the Natural Retail Federation.

“While they are in town looking for the perfect item they will stop in and have lunch, or walk by another store and see something in a window display that catches their eye,” said Gibbs. “Old Town is not targeting a specific age group, there is something in Old Town for all ages.” Ozone’s Brewhouse has been very successful ever since it has arrived last Spring. Located on 305 Beaver Street. Photo by Joshua Chung

The Grid is not officially open yet to the public, which is why it is undetermined who will ultimately be coming in, so based on the current marketing thus far, it seems that The Grid will attract people who remember the vintage games and who appreciate craft beer, according to Montie.

“Old Town has already done a wonderful job attracting a wide range of businesses and clientele,” said Montie. “We’re simply happy that they have been so accepting and supporting of our concept.”

Michigan State University professor Ken Szymusiak discussed which types of businesses succeed in small towns like Old Town. Szymusiak is a professor at the Michigan State Eli Broad College of Business and was a former Old Town Commercial Association board member as well.

“It really depends on the demographic makeup of the small town, as it all comes down to disposable income,” said Szymusiak. “Rochester, Michigan is a small town, but is able to support a lot of different types of retail because people have extra money to spend.”

Most healthy small communities will have a mix of national and local shops. The ideal mix for a successful town would be somewhere around 70 percent local to 30 percent national as a good target. Quality comes first, along with good retailers to get the momentum going and quantity comes once the destination has become established, according to Szymusiak.

Tim Holbrook has been working at Elderly Instruments for 21 years now, as he says diversity in businesses is what will continue to make Old Town successful for the years to come and is what is currently making Old Town a midwest destination for many.

“From salons, restaurants, art galleries, places like Preuss Pets, and bike shops, there is a lot of diversity that has been expanding Old Town’s borders that is amazing to see,” said Holbrook. “Keep this area as diverse is possible and get as many businesses as possible would be great.”

Old Town should try not to allow franchises that are known across the country to find property here, as there is enough already here in Lansing and there is really no need for them to be placed in Old Town, according to Holbrook.

Anna Buckner, a resident of Old Town has not lived here for a long time, however she is thrilled to see that Old Town wants to support small businesses that are looking to come in.

“I would hate to see the area bring in bigger franchises,” said Buckner. “Old Town has a community-oriented sense about it and the smaller shops really reinforce this spirit.”

Old Town is providing a friendly environment throughout the area, as people want to generally get to know you when you enter a shop. It is not just what the customer is interested in purchasing, but who that person is, what they do, and what they are specifically interested in, which is really refreshing, according to Buckner.

Small towns need both quantity and quality just like everywhere else. If you can develop a critical mass of specialty shops, your town can become a shopping destination for nearby cities, according to Ryerson University Professor, Brad Poulos. Old Town is unlike most districts in Lansing, with no franchises that are usually known across the country. Screenshot courtesy by Google maps

“Local residents will demand quality in basic services and if the local restaurant isn’t up to snuff, competition should deal with that,” said Poulos. “Perhaps it would take longer for a competitor to emerge in a smaller market, however market forces still apply.”

In most cases a city-based business would carry less market risk than the same business located in a small town, however the investment is likely higher. If an owner is deciding between where they want to start their business, it is ultimately up to them, as it will reflect the owner’s preferences along with many dimensions, according to Poulos.

“In my opinion, along with for many, the small town life outweighs many other considerations,” said Poulos.