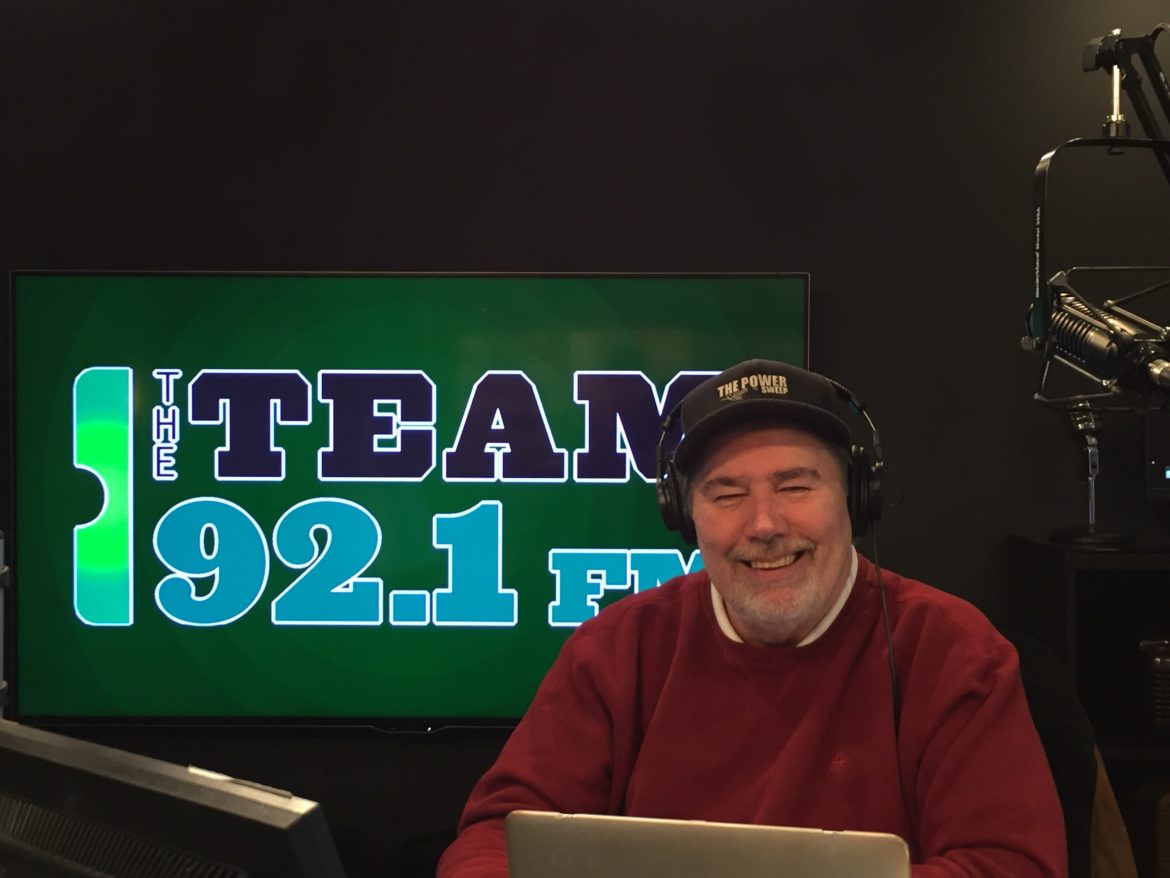 Jack Ebling poses in the studio at The Team 92.1 FM

If you blinked, you just might have missed it. But the Michigan State Spartans led by head coach Tom Izzo ended their 2017 NCAA Tournament run after playing but two games.

With a victory over Miami in the round of 64 and a loss to Kansas in the round of 32, it is not difficult to guess what East Lansing citizens were watching Friday and Sunday nights. But does the same loyalty to Spartan basketball exist next door in Lansing?

Most people in Lansing are not directly connected to MSU other than the fact that they are only separated by a few miles. But Ron Fisher, an MSU professor who teaches a class on the social science of sports, explains that many people in Lansing do have an indirect connection to MSU.

“There are lots of local people and organizations that do not have [direct] connections to MSU,” said Fisher. “But they may have business with MSU … Almost everyone in Lansing has some connection to the university, either directly or indirectly.”

Does these connections mean that Lansing citizens are more likely to follow the Spartans in the NCAA Tournament? Fisher believes that the answer is both yes and no.

“Probably half [of the people in Lansing] don’t follow the tournament at all,” said Fisher. “The other half probably will stick with MSU because they live by MSU and have a direct or indirect connection with them. But there are others in the Lansing area who have connections to other schools, so I think it’s a mixed bag.”

As Fisher pointed out, not everyone is a sports fan. But Jack Ebling, the host of The Drive with Jack Ebling on The Team 92.1 FM in Lansing, believes that those who do like sports will find a connection with the Spartans. In fact, when MSU sports are thriving, Ebling feels that there is a sense of satisfaction in Lansing. Jack Ebling poses in the studio at The Team 92.1 FM

“People in this town are consumed by winning,” said Ebling. “You see that with the attendance at the hockey program. It used to be that you could never get a seat at Munn [Ice] Arena. Now people are buying them, or companies are buying them and giving them away, so it’s very different. I have seen Jenison Fieldhouse filled up when the volleyball team was great. I’ve seen the place packed when they had world-class track athletes. So it’s based on success.”

Fortunately for Lansing citizens, success has not been an issue for Spartan basketball. They have gone dancing in the NCAA Tournament for 20 straight years and have played in a postseason tournament every year since the 1980s.

“You talk about the calendar: January, February, Izzo,” said Ebling.

Doug Warren, the producer for Ebling’s show, also believes that most Lansing citizens will care about MSU athletics, but primarily when the Spartans are playing well. He claims that recently, The Drive with Jack Ebling’s ratings have been high. He credits this partly due to Spartan success in both football and basketball over the past decade.

Warren also believes that the rivalry between Michigan State and Michigan causes Lansing citizens who typically do not care about sports to pay attention to MSU’s tournament success. Being from the west side of Michigan, Warren never truly understood the passion that comes with the rivalry until he moved to Lansing.

“There is no question that having a Big Ten university in your backyard is certainly big,” said Warren. “And with the rival (Michigan) being 60 miles down the road, families have kids and parents that went to either or both universities in some cases, so the rivalry is deeply engraved here, no question. And with the success of the basketball team here, basketball is as big here as anywhere in the country.”

But Lansing is not a classic college town. First and foremost, it is the capitol city of Michigan. This gives mixed views on the Spartans because lots of Lansing citizens are from different places all over the state. They may have allegiance to other schools and feel neither a connection nor unity with the Spartans.

“Being a state capitol, there are a lot of Michigan graduates who would not be here otherwise,” said Ebling. “There are Notre Dame graduates, graduates from all the MAC (Mid American Conference) schools … You wouldn’t find many Michigan State alums in Ann Arbor … it’s a state capitol and there are so many different groups.”

“I think probably not a lot of bars and restaurants are affected by MSU in the tournament,” said Fisher. “Many of these [tournament] games are at noon… I think a bigger economic effect is businesses selling apparel when MSU does well in the tournament.”

Sears in the Frandor Shopping Center sells lots of MSU apparel. When asked if Sears sells more of this apparel during March Madness, Kaleb Isbell, an employee at Sears, gave a very quick “yes.” And now that MSU is booted out of the NCAA Tournament, all MSU apparel is 25 percent off. This is no coincidence. Google Maps image of Sears in the Frandor Shopping Center

“I just have to say [that we sell more MSU apparel during March Madness] because we’re closer to MSU, so the students come here for their merchandise,” said Isbell. “It just goes with the seasons. Pretty much any season where there’s a lot of MSU games, we’ll sell a lot of that [MSU merchandise].”