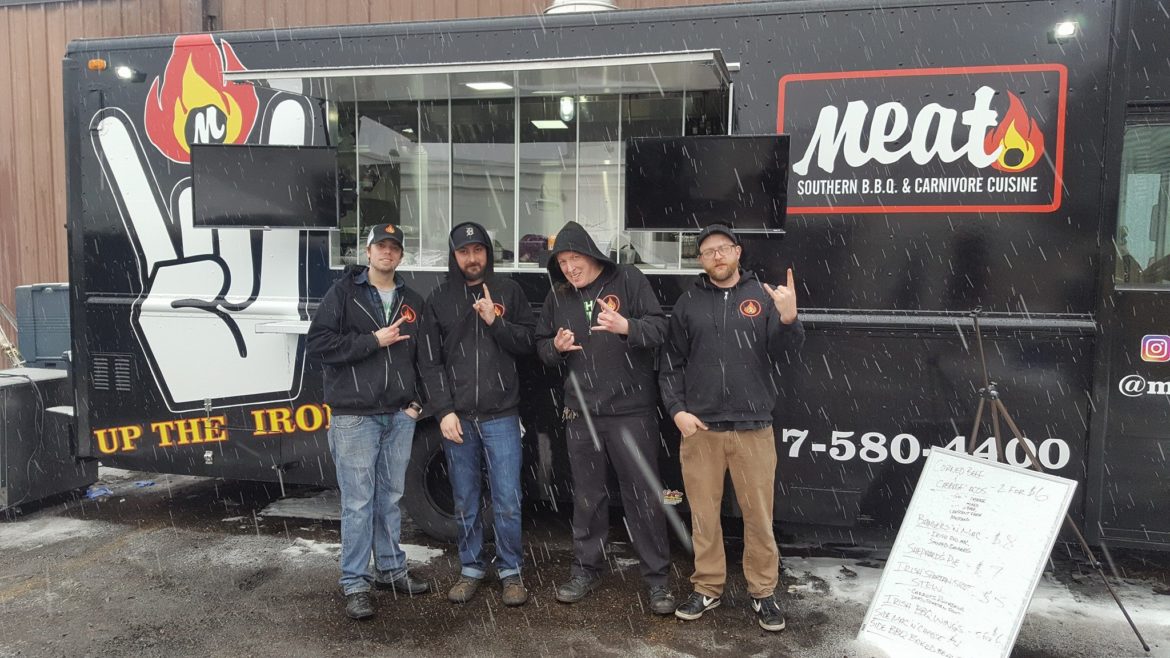 As the success of Old Town’s very own Meat Southern BBQ & Carnivore Cuisine continued, owner Sean Johnson knew he wanted to expand the business. He did not want to open another brick-and-mortar restaurant, being that running an already successful one is stressful enough.

The idea of a food truck came to him as a perfect solution to help market his business in not only Lansing, but throughout the state of Michigan. A wall of the multiple awards Meat has won since they opened displayed upon walking in. Photo taken by Alexis Downie.

The food truck debuted on St. Patrick’s Day at Ellison Brewery + Spirits in East Lansing, where it is still currently located. The truck is open Thursday-Sunday from 4 p.m. to 9 p.m. The plan is to eventually start moving it around town a few days a week to see what kind of attention it gets.

“Since we opened the truck, we’ve got a lot of interest and people coming to do different events,” said Johnson.

He and his wife Lynnette opened the restaurant/bar on Turner Street in June of 2012 after what might be called a “midlife crisis type of situation.” Without kids and a job that was not working out, it seemed like the perfect time to open a restaurant. This had been something Johnson always wanted to do, despite not having any restaurant industry experience.

“I was big into barbecue food, something I did as a hobby for years,” said Johnson. “One day we fell into this space by accident, so we just took a plunge to do it and it worked out.” Growing up in Lansing, Johnson knew what Old Town was like before the revitalization began in the neighborhood. He prides himself knowing that Meat has been a part of the resurgence of the area.

“Within the last five years, we’ve really started to see it spring up,” said Johnson.

Carl Borchgrevink, an associate professor at Michigan State University’s School of Hospitality Business, believes there are some keys to running a prosperous restaurant. Being that Old Town is a small neighborhood, standing out is important in order to generate local support.

“Close attention to detail, understanding the consumers or customers, a desire to provide service and not having to make money the first few years of operation are all important,” said Borchgrevink. With an extensive menu, customers have a variety of entrees to choose from. Meat customer and Lansing resident Rachel Knox thinks the different homemade sauces the restaurant has to offer makes it unlike any other place around town.

“Besides the awesome food, my favorite part about going to Meat is the atmosphere,” said Knox. “I love the bar-like setting, it makes it feel more casual and that it’s all about the food and not the fancy decor.”

Three to four employees work the food truck, on average, compared to the 34 that help run the brick-and-mortar restaurant. With a constant flow of customers, most of the employees are full-time at the restaurant.

The restaurant seats about 100 people inside, and another 30 on the patio. Johnson said that at least 80 percent of the time Meat is at full capacity. With a food truck, it makes it is easy for customers to swing by if they are on the go.

“I have no real plans for it (the food truck) right now other than to kind of market the brand and see what happens next,” said Johnson.

Check out their Facebook page to keep more up-to-date with where the food truck might be moving next.