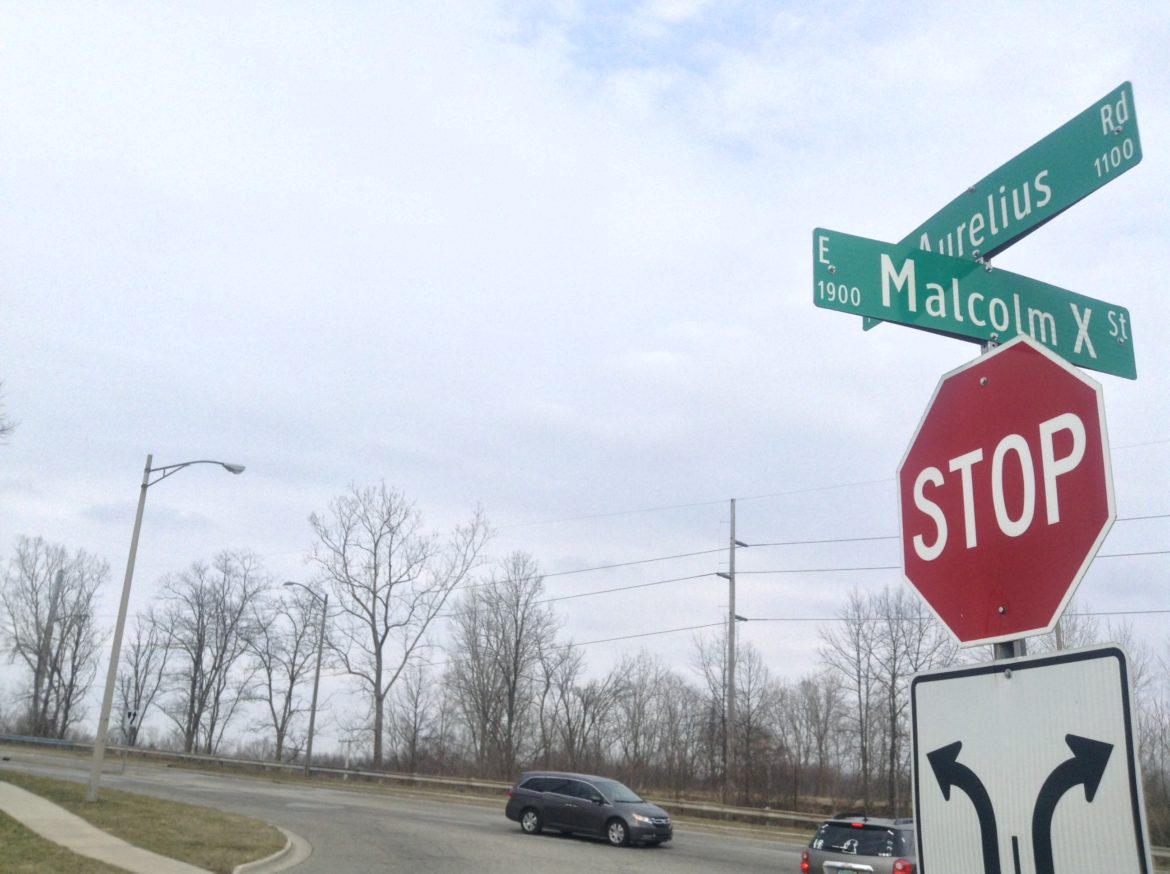 A street sign marking Malcolm X Street in Lansing. Its intersection with Aurelius Road is its eastern terminus. Photo by Maxwell Evans

Malcolm X isn’t someone you would call universally beloved.

That’s why, at first glance, it’s curious that the capital city of the state of Michigan would rename its Main Street to Malcolm X Street. The Civil Rights figure who called for change to be created “by any means necessary,” despite his lifelong efforts to combat racism and white supremacy, has hardly grown to the near-untouchable status of Martin Luther King, Jr. (who had a major Lansing street renamed after him in 1994) or Cesar Chavez (who briefly was to have Grand Avenue renamed after him, before the plan was scrapped amid disapproval from Grand Avenue businesses).

This is the same man who, without proof, accused Jews of owning 90 percent of the businesses in black neighborhoods and shamed them for doing so. This is the same man who claimed that John F. Kennedy’s murder was an example of “chickens coming home to roost,” his way of implying the slain president deserved what he got. Yet at the same time, the former Malcolm Little also used his well-spoken demeanor to advocate for black rights and equality, as well as inspire people who had long been treated as lesser to speak out and act upon their desire for basic human rights.

However controversial Malcolm X was, one fact alone may be most important in the success of the campaign to give his name to a Lansing street: He was once a Lansing resident. An application submitted in 2010 by Ammahad Shekarraki for the name change was approved by the city council, and by 2011, one of Lansing’s most well-known residents was memorialized with his own street. Malcolm X Street in Lansing is outlined in red. Map by scribblemaps.com and Maxwell Evans

William Hall, a professor of political science at Webster University in Missouri, thinks that this street designation is long overdue. He said that Malcolm X was a “giant of humanity … who eventually transformed himself and then helped transform and humanize the world” and that naming a street after the Civil Rights leader is “fitting.”

“When one thinks of Lansing, there can be no conjecture in my view that anyone other than the late, great Malcolm X has contributed more … on the world stage,” Hall said. “This is a welcomed, albeit belatedly small, gesture in the right direction.”

Michigan State junior Tchad Cousins agrees that it’s not surprising that a former resident with a status like Malcolm X’s has earned a street name, no matter his legacy.

“I wouldn’t say it’s necessarily problematic,” Cousins said of the honorary street name. “We have streets named after people who owned slaves, so where are we gonna draw the line with weighing the good important people have done against the bad?”

Despite his obvious local ties, one reason that makes the choice to rename the street after the activist complicated is that it’s unlikely Malcolm X enjoyed his stay in Lansing. As a young boy in 1929, his house was allegedly burned down by white supremacists, and two years later, his father died under questionable circumstances, also rumored to be racially-motivated.

In terms of quality of life on Malcolm X, it is relatively tame, with only five crimes reported in 2017 along the street’s 2.7 mile stretch, according to the Lansing Police Department crime map. A billboard looms over I-496 north of Malcolm X Street in Lansing. Outside of a few homes on East Malcolm X, there is no development to be found on the north side of the street. Photo by Maxwell Evans

This likely has to do with the fact that it runs essentially parallel to I-496 and therefore has very few buildings on the north side of the street, as well as West Malcolm X Street’s path through an industrial area and GM’s Grand River Assembly Plant.

Cousins thinks that the name of a street doesn’t signify too much about the culture of the city or the activity that occurs on it.

“I’m not blown away or overly excited [about the street’s name],” Cousins said. “It’s like yeah, you’re doing these things, but what’s going on on these streets and in these areas doesn’t always reflect what [those who have streets named after them] lived for.”

While the former Main Street has taken the name of an outspoken activist for over half a decade now, as the street meanders through a sleepy section of the city, you get the sense that the city’s renaming of the street was more of a cosmetic change than a real commitment to recognizing a famous local. With no other formal recognition of his residence besides the historical marker of his third home in the area and charter school El-Hajj Malik El-Shabazz Academy, bearing the name X took after his pilgrimage to Mecca, Malcolm X Street stands as a mere nod to a boy from Lansing who grew to be a man both respected and reviled.

Hall said that beyond a street name, hopefully Lansing will also expand on the concept of honoring who he calls an “iconic figure” in the city.

“Perhaps it may hopefully provide the necessary foundation to generate interest, financing and cultivation of a theme and historical development-district [in Lansing],” Hall said.